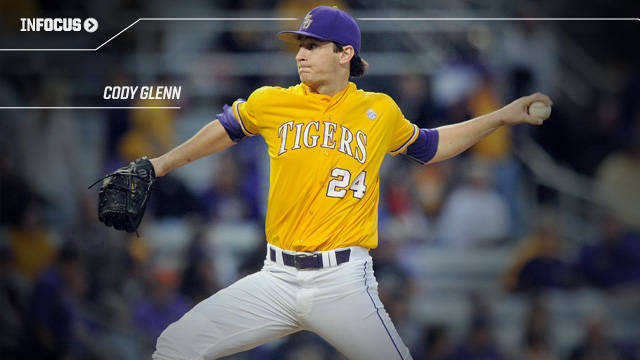 As Cody Glenn takes the mound for the 2014 season, it is with a new confidence and passion for the game. At the end of the 2013 season, Glenn began to truly realize the opportunity he has to play baseball for LSU.

The Houston, Texas native never saw himself in Purple and Gold growing up. It was all about the Texas schools or electing to sign a professional contract. LSU was not even on his radar until he made it to campus to talk to LSU coach Paul Mainieri. The chance to play for an elite program was the draw for Glenn.

“When I got here, I fell in love with every single aspect of this school,” said Glenn. “They had everything I could ever dream of, so I decided to make my commitment. I knew I wanted to be a part of this tradition of excellence and I have never regretted my decision to come to LSU.”

The Toronto Blue Jays drafted Glenn in the 15th round of the 2011 MLB Draft, and it was a serious option for him to play professional baseball. After talking to his family, he believed the best decision was to play for LSU.

“It was definitely an option for me. After consulting with a lot of people as well as the staff at LSU, I knew it was an opportunity I couldn’t pass up,” Glenn said.

Glenn pitched sparingly in his first season on campus. It was not until the midweek game at Louisiana-Lafayette last season that Glenn cemented himself as a weekend starter. In the game against the Ragin’ Cajuns, the southpaw threw seven shutout innings while allowing three hits and recording one strikeout.

During the 2013 season, Glenn pitched 15 games with a 7-3 mark and 2.68 ERA against some of the best teams in the country. A highlight was a win over Alabama in the opening round of the SEC Tournament, limiting the Tide to no runs on five hits in seven innings.

“Pitching behind some of the best pitchers in the country and watching them develop throughout the year was such a great learning experience,” Glenn said. “I learned so much from them and (LSU pitching) Coach (Alan) Dunn. It was one of the best years of my life.”

Going into this season, Glenn is looking to reclaim his spot in the weekend rotation. By taking the summer off, he was able to rest his arm and focus on ways to improve on the mound.

“I’m looking to be better than I was last year,” Glenn said. “I need to find that consistency and add my curveball that I have been working on. This program is so good and we have so much talent on our team. I have to earn my job in the weekend rotation with even better competition than last year.”

Glenn has learned from past mistakes and worked harder than ever over the past months to develop his skills. To Glenn, the most important aspect of being a better pitcher and person is to learn from missteps and put them behind you.

“Growing up, my dad taught me to be the best possible person in the moment. I’ve grown so much, and I feel like I’ve become a better person,” Glenn said.

Going into his junior season, it is all about living in the moment and appreciating everything that has been given to him. He realizes the opportunity to play baseball at LSU is not something to take lightly.