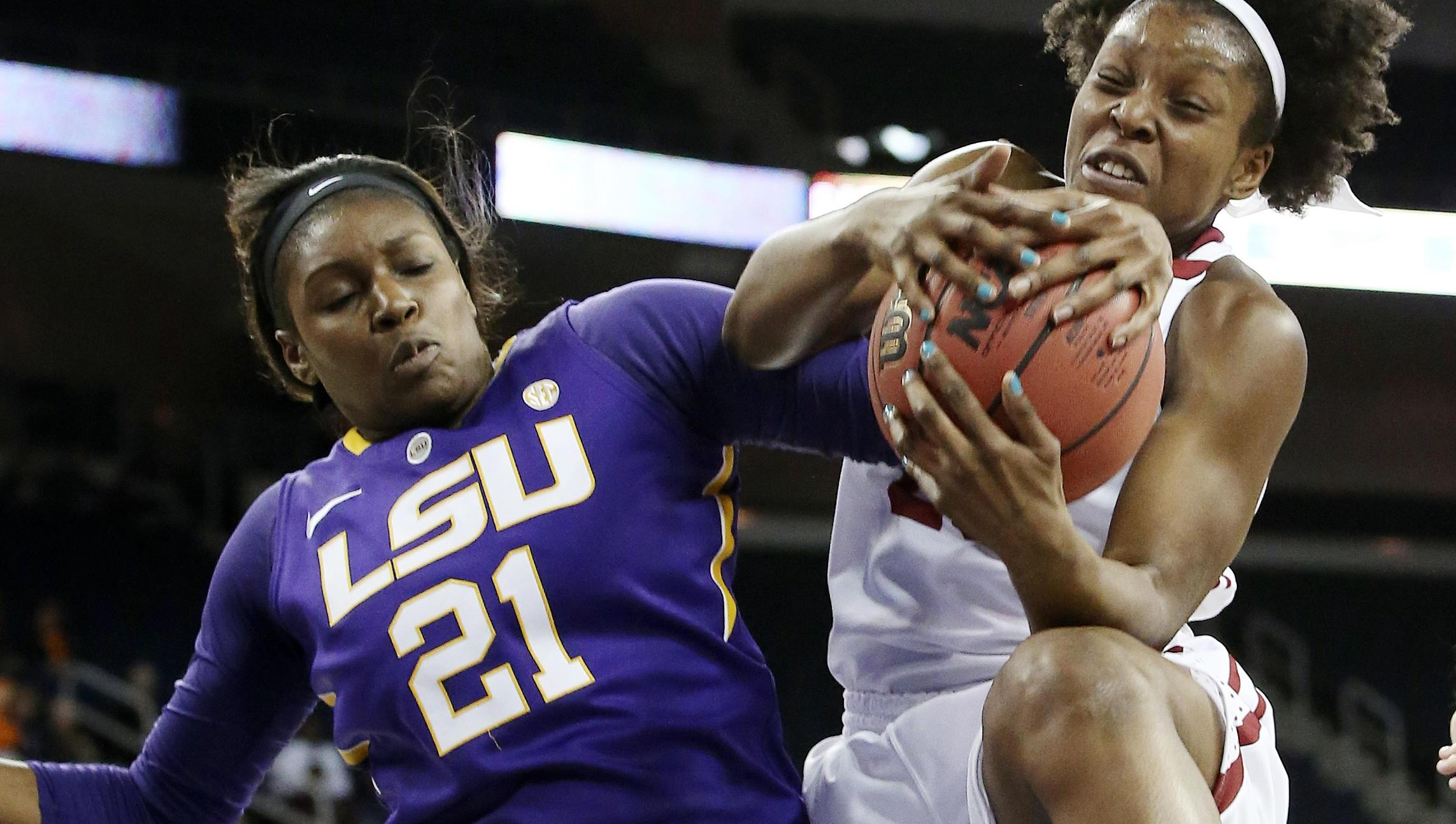 DULUTH, Ga. – Danielle Ballard and Shanece McKinney poured in 18 points apiece as the LSU women’s basketball team ended its six-game losing streak with a 78-65 victory over Alabama Thursday during the second round of the SEC Tournament at the Arena at Gwinnett Center.

With the win, LSU (19-11) advances to meet No. 2 seed Tennessee in Friday’s quarterfinal round. Tipoff is scheduled for 5 p.m., and the game will be televised by Fox Sports Network, SportSouth and http://www.watchespn.com/.

The Ballard-McKinney duo combined for a 15-of-19 shooting clip and knocked down six of their seven free throw attempts. As a team, the Lady Tigers were 32-of-63 from the floor. The 50.8 field goal percentage was LSU’s highest shooting output since the Mississippi State game on January 30th.

For McKinney, the 18 points was her second-highest career output which was also just one point away from her career-high set against Mississippi State earlier this season. She collected a career-best tying 10 rebounds and a season-high tying four blocks en route to her second career double-double. LSU has won all nine games this season when McKinney has reached double figures.

Ballard tallied a solid all-around performance with 18 points, seven rebounds and four assists. She has tallied eight of her 11 double figure efforts on the season versus SEC opponents.

“I thought McKinney did an exceptional job of just being accurate,” head coach Nikki Caldwell said. “Everything that she put up was pretty much going in.  She played very aggressive and is our clean up lady.  Her presence on the defensive end, when players are trying to get to the basket, you got to be aware of her coming over and blocking shots.  She had four of them tonight.  It set a tone.”

Jeanne Kenney chipped in 14 of her 16 points during the second half. She registered four assists and three steals over her 27 minutes of action.

Theresa Plaisance turned in 12 points and 12 rebounds for her third double-double in her last four performances. She extended her streak to 20 consecutive games with 10-plus points.

Alabama (14-16) was led by Shafontaye Myers, who wrapped up her career with 27 points aided by six triples. Daisha Simmons secured 18 points, seven rebounds and four assists for the Crimson Tide.

Myers tallied Alabama’s first 14 points sparked by a quartet of three-points to give the Crimson Tide a 14-10 advantage at the 11:19 mark.

The Lady Tigers seized the momentum and put together a 16-4 spurt over the next 6:01 off the clock. Ballard and Moncrief ignited the run with a pair of field goals. The spurt was capped by a Harden traditional three-point play and a Pedersen three-pointer made it 26-18 with 5:02 remaining.

LSU completed the first half going an efficient 16-for-26 from the floor and took a 34-27 lead going into the locker room.

Ahead 45-36 with 15:43 to go, LSU ripped off 19 of the next 22 points over the next 8:07 finished off by a Kenney trey,  a McKinney putback, a Pedersen jumper and a Plaisance second-chance basket  to surge ahead 64-39. The Lady Tigers also added a stingy defensive effort which forced Alabama to misfire on 15 of 16 shots and commit six turnovers.

LSU would maintain its double digit lead the rest of the way. The Crimson Tide would pull as close as 10 points at 71-61 at the 1:34 mark. The Lady Tigers would close out the 13-point decision and drain seven of their eight free throws inside the final 94 seconds.

Looking ahead, I told the group to enjoy today (and) enjoy the moment as far as having another game,” Caldwell said. “But tomorrow we get to play again for 40 minutes together as a team.  That’s what it’s going to be about.  It’s going to be about us executing our game plan and playing it to the best of our ability. I don’t want this group to go into tomorrow hoping or wishing. I want them to go into that game and make it happen. They just got to trust in that, but more importantly trust each other. When they do trust each other, they play the way they’re capable of with this togetherness. They have a strong bond, and it’s unbreakable.”

The winner of Friday’s LSU-Tennessee contest will punch its ticket to the second semifinal versus the winner of the Texas A&M-Auburn contest at 1:30 p.m. CT on Saturday.

The LSU Sports Radio Network will broadcast every Lady Tigers game on Talk 107.3 FM in Baton Rouge and inside the Geaux Zone for subscribers at www.LSUsports.net/live. Patrick Wright, the voice of the Lady Tigers, will have the radio call.