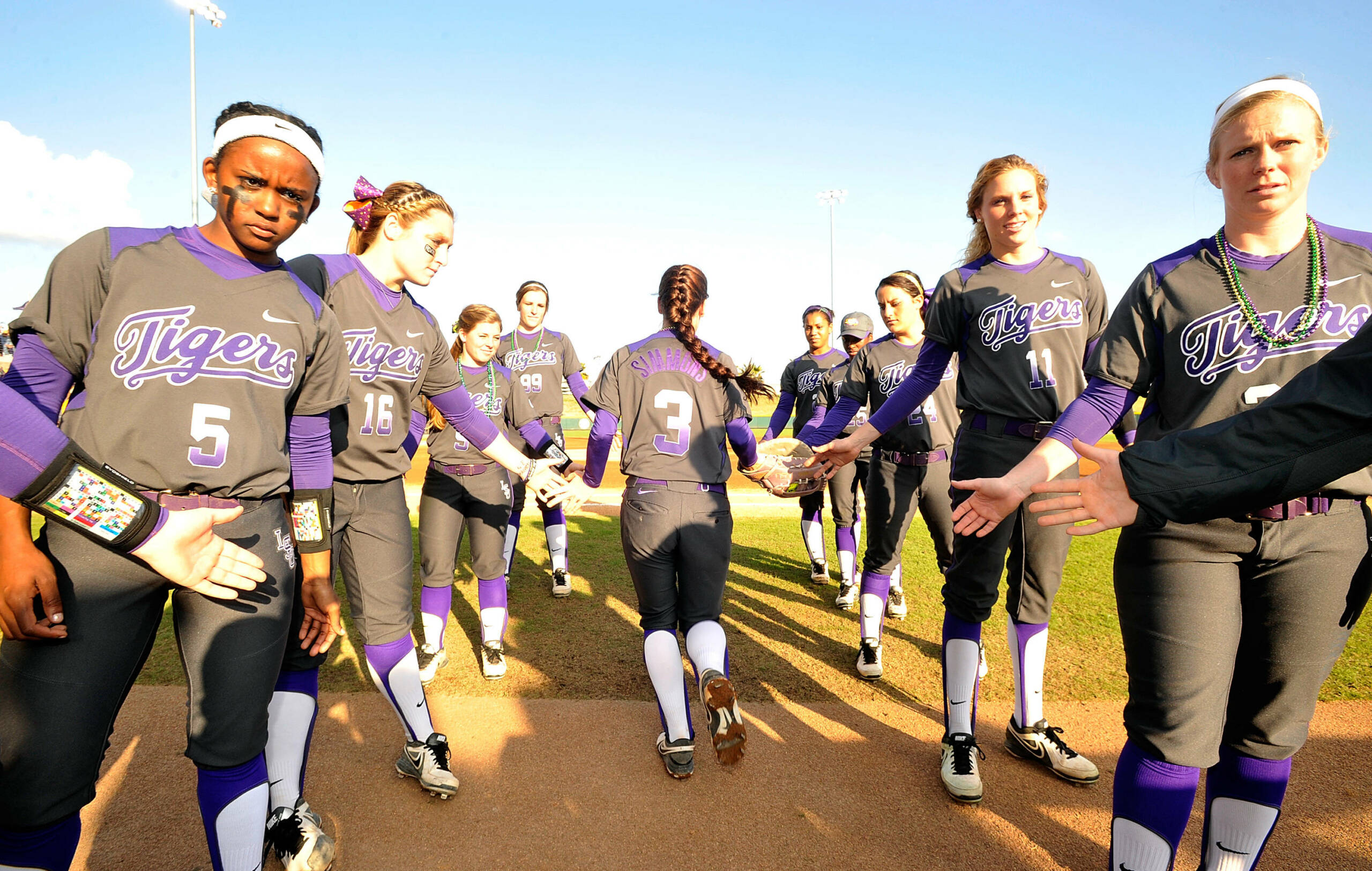 BATON ROUGE, La. – Winners of eight of its last 10 games, the No. 24 LSU softball team takes a four-game winning streak into the weekend as the Tigers open Southeastern Conference play on Friday evening, traveling to take on the Auburn University Tigers at Moore Field in Alabama.

Game one of the series is set for a 6 p.m. start on Friday, with 1 p.m. start times for both Saturday and Sunday. Links to live stats and video provided by Auburn will be available on LSUSports.net, with continuous live updates via Facebook and Twitter throughout the weekend.

LSU enters the weekend 16-6 overall after defeating the Northwestern State Lady Demons on Tuesday to run its winning streak to four games heading into the SEC opener. The Tigers were originally scheduled to take on the ULM Warhawks on Monday, but the game was moved to April 1 due to cold temperatures. The tilt against the Lady Demons was the first true road game for the squad this season, overcoming a three-run deficit to win 5-3.

“They’ve done a good job of coming back a few times this year, and that was one of the larger deficits we’ve had to overcome,” head softball coach Beth Torina said. “But this team showed they have some fight. Playing good defense, offense and pitching are all important, but having that will to win and that ability to come back and gut it out I think is equally as important as those other skills.”

The Tigers put together another stellar round of play over the weekend and into Tuesday, as the squad went 3-1 at the Purple and Gold Challenge with wins over Iowa State, Jackson State and Lamar, with the only loss coming to Harvard in 12 innings. LSU was once again the top overall hitting team and heads into the weekend with a team batting average of .325 and 186 hits which is two off of Texas A&M for the lead in the conference.

After a solid start to the season, the awards began to trickle in over the early portion of the week, led by Kelsee Selman and her first league weekly award as she was named the SEC Pitcher of the Week after tossing the 34th no-hitter in team history and pitching a combined 8.1 innings of hitless work over the course of her two starts. Selman, who was also the Purple and Gold Challenge MVP, is 4-0 on the year after earning the win over Northwestern State and has been on fire as of late, as she has not given up a single run in her last 16 innings in the circle, and just four hits in her last three games total.

Blades, who topped hitting over .400 at the plate through the first month of the season, leads LSU with a .397 average while starting every game in left field. Her 27 hits are second-most on the team and tied for sixth in the Southeastern Conference.

After putting in a load of work at the Mary Nutter Collegiate Classic, Corbello made her one start last weekend count as she earned her fourth shutout of the year while scattering six hits against the Cyclones. Her team-low 1.07 earned run average is sixth in the conference, as her 59.0 innings pitched is fourth.

A.J. Andrews has taken hold of the top spots in hits for the Tigers, as her 28 total are fifth in the Southeastern Conference, while her 19 stolen bases is five clear of the next highest number in the conference. The centerfielder has nine multi-hit outings on the year, including piecing together a three-hit game against Jackson State and two-hit outing against Northwestern State for two in the last four contests.

“I think it’s important to keep our offense consistent,” Torina said. “I think the more our slappers and table-setters continue to do their job the better we are. We go as they go. If they can keep things going we are going to score a lot of runs that day.”

After LSU rallied to cut the deficit to just one run against the Lady Demons, the team got the big hit it needed from Kellsi Kloss who registered her fifth home run of the season to tie for the team lead with Bianka Bell at five. For the sophomore it was her second game-tying or go-ahead home run of the season and put the Tigers on top for good, as Kloss accounted for the final three LSU runs in the game.

With 22 RBI on the year, Sahvanna Jaquish has been able to give the Tigers a big boost when needed, as she’s earned three or more RBI in a game five times this season. The Highland, Calif., native is not shy about hitting one over the fence, with three bombs in her last seven, including smacking the second grand slam of the season in the win over JSU.

“If the middle of our lineup can continue to swing with some power we will have a good offensive showing this weekend,” Torina said.

LSU is 14-3 all-time in conference season openers, as the Tigers have won seven of their last ten dating back to the 2004 season. As the Purple and Gold Tigers take on Auburn, this will be the third time that the two will me to kick start the conference slate, with LSU holding a 2-0 advantage in those meetings.

The team leads the overall series history holding a 44-13 advantage in all-time meetings, winners of eight of the last ten over the Blue and Orange Tigers, while also claiming 17 of the last 20. In the last meeting against the two teams back in 2005, each side claimed a game as LSU has not dropped a series to Auburn since the 2005 season.

“The SEC is really intense, and you don’t get a break any weekend you take the field against an SEC opponent,” Torina said. “We have to be prepared and show up with our best no matter who we’re facing. I know they are going to be a quality softball team and we are going to have to show up with our “A” game.”

Auburn comes into the game 17-3-1, just dropping out of both Top 25 polls in the most recently released rankings. AU has won its last four games as well, as the Tigers are batting .300 on the season with a 2.17 earned run average. Kasey Cooper and Branndi Melero combine for eight home runs and 56 RBI for Auburn, while the team’s top two pitchers are a combined 8-3 in Lexi Davis and Marcy Harper, to go along with their 114 strikeouts.

“We haven’t seen Auburn much since I’ve been here, but we know they will be well coached and prepared,” Torina said. “They have a really solid middle of the lineup and doing a lot of good things offensively, so they will definitely be a challenge for our pitching staff.”