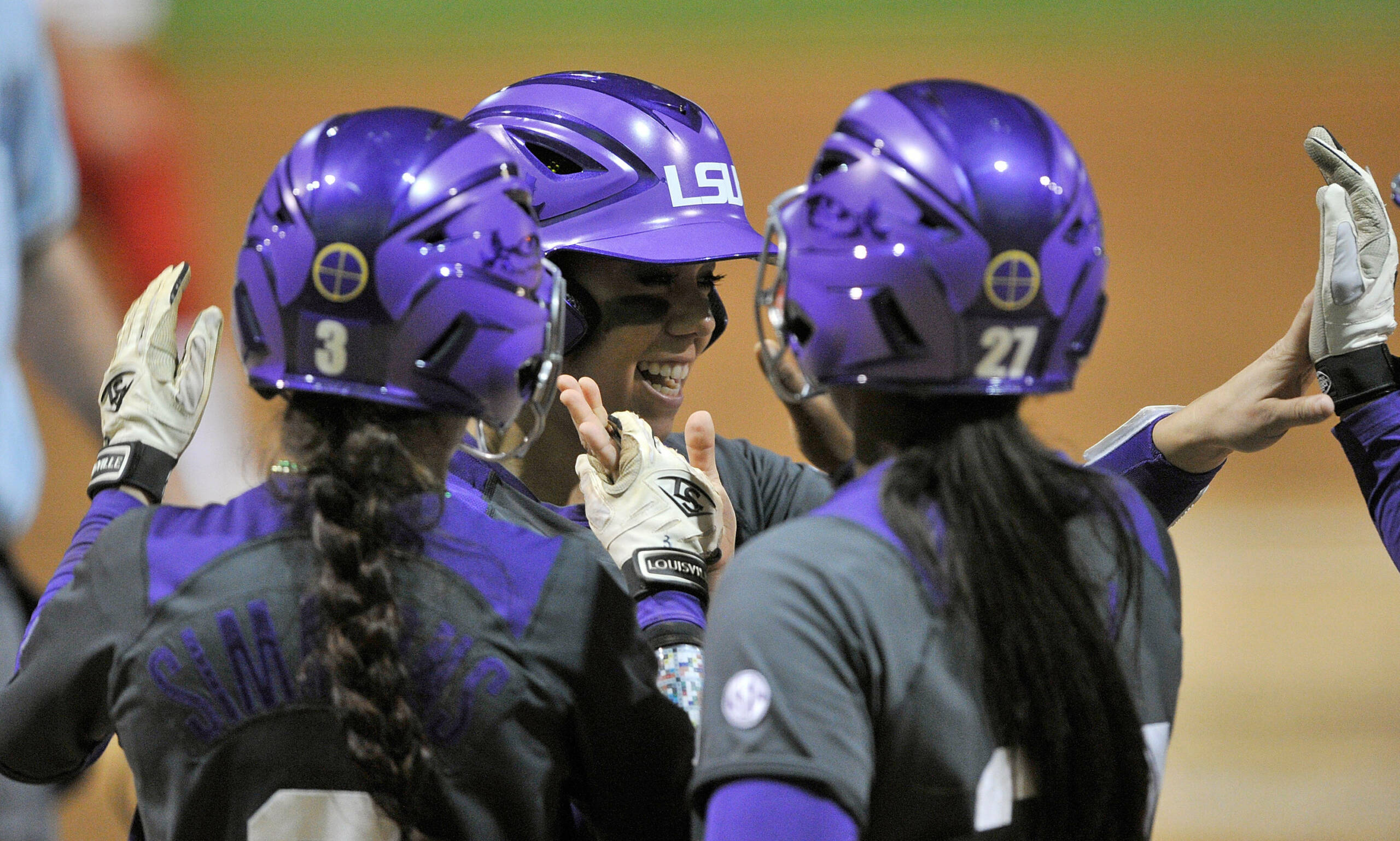 Nominee for SEC Offensive Player of the Week (3/3)

Sahvanna Jaquish, Fr., Highland, Calif.
LSU freshman catcher/infielder Sahvanna Jaquish batted .400 this week with two home runs and a Purple and Gold-leading seven RBI to power the Tiger softball team to a 3-1 weekend in the team’s final tournament of the regular season. The Highland, Calif., product had one of the top averages in the five-team tournament, as she slugged, 1.000 and produced a .500 on-base percentage in four games between Friday and Saturday. Jaquish has hit three of the last five LSU home runs, as she accounts for all four hit by freshmen on the team. After going 2-for-3 against Harvard, Jaquish crushed 1-2 pitch against Jackson State to give LSU a six-run advantage. And although she went hitless in the contest against the Cyclones, she took the second pitch of her first at-bat against Lamar and cleared the bases to earn the second Tiger grand slam of the year and put LSU up five after one inning.

Nominee for SEC Pitcher and Freshman of the Week

Nominee for SEC Pitcher and Freshman of the Week (3/3)

Kelsee Selman, Fr., Lufkin, Texas
LSU pitcher Kelsee Selman threw the first no-hitter of the season and 34th in program history to highlight a 2-0 weekend where she allowed only three hits in 11 innings while striking out 16 to move to 3-0 on the season. In the final three games of the Purple and Gold Challenge at Tiger Park over the weekend, the Lufkin, Texas native earned two of three straight complete-game shutouts to aid a Tiger pitching staff that has not given up an earned run in the last 32 innings of play, as opponents hit a paltry .086 against her. Against Jackson State on Friday in her first work since Feb. 15, Selman walked the third batter she faced in the first inning and then went on to retire the next 16 in order to become just the fourth pitcher to earn a no-hitter in six innings and first since 2001, using just 76 pitches. On the next day she made it three innings before allowing her first hit of the weekend, holding Lamar to just three while striking out seven. Between JSU and LU, Selman pitched 8.1 innings of hitless softball.

Notes on the Tigers
LSU is 16-6 on the season after going 3-1 at the Purple and Gold Challenge over the weekend at Tiger Park and defeating Northwestern State on the road 5-3. LSU opens SEC play on Friday against Auburn in a three-game series at Moore Field. The Tigers have won their last four in a row and eight of the last ten games overall. LSU has earned double-digit hits in three of the last six games and has nine games this season with 10 or more hits in a contest, as LSU is 10-1 when earning double figure base knocks. LSU upped its home run total to 22 after hitting four more over the weekend. The Tigers have hit a combined 12 in the last 11 games alone. Kellsi Kloss hit her team-high tying fifth home run of the season on a two-run shot, helping the Tigers earn their second comeback victory of the season over the Northwestern State Lady Demons. Bianka Bell led LSU at the plate in the four games of the Purple and Gold Challenge hitting .583 with seven hits and five runs scored. Bell had three doubles and a triple to go along with one RBI, slugging 1.000 with a .667 on-base percentage and only one strikeout in 12 at-bats. Bell raised her batting average 66 points as she is third on the team in hitting with a .352 average and has reach base in 16 straight games. Sahvanna Jaquish hit two home runs during the weekend and has hit three of LSU’s last six home runs. Jaquish alone has all four home runs among freshmen on the squad. Jaquish hit the second grand slam of the season against Lamar while hitting a three-run homerun against Jackson State to finish with four total hits and a .400 average. Sandra Simmons had the game-winning hit against Iowa State, as she was 5-for-13 with a .385 average against the field. Simmons produced a double and hit her third home run of the season, using a three-run bomb against Lamar to put the game way for LSU. Bell, Jaquish and Simmons were named to the All-Tournament Team. Jacee Blades had her hitting streak end at nine games over the weekend, which is a career long for the senior outfielder. Blades was named the LSWA Co-Hitter of the Month. A.J. Andrews finished tied for second on the team in hits with five, as she was a perfect 5-for-5 on stolen bases. Kelsee Selman pitched the 34th no-hitter, and first for the team this season, against Jackson State in just six innings. It was the fourth six-inning no hitter in team history and the first since 2001. Selman moved to 3-0 on the season, earning the second of three shutouts for the team against Lamar, as she held JSU and LU hitless for a combined eight innings. Selman was named the Purple and Gold Challenge MVP and was named the SEC Pitcher of the Week. Selman came on in relief and earned her fourth consecutive win over the Lady Demons on Tuesday. Baylee Corbello earned her fifth consecutive win to move to 7-2 on the year with her ninth complete game of the season in the 1-0 win over Iowa State. Corbello leads the team with a 1.07 earned run average, 59 innings pitched, four shutouts and in total strikeouts with 60. She was named the LSWA Pitcher of the Month. Ashley Czechner suffered her second consecutive defeat in her only outing of the weekend, as she threw over 170 pitches against Harvard in all 12 innings. The only run that crossed was unearned against the Crimson with the international tie-breaker scenario kicking in at the start of the tenth inning. Czechner was named to the All-Tournament Team as well.