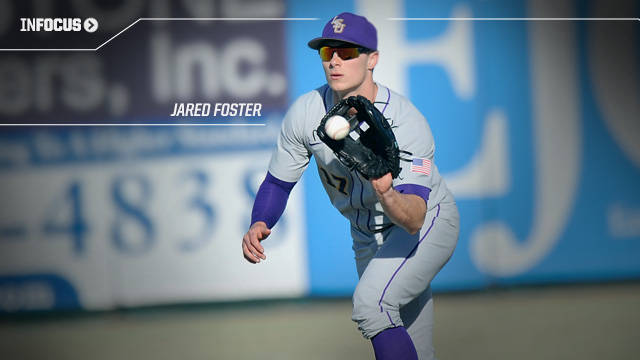 LSU outfielder Jared Foster is, without question, a one-of-a-kind athlete. The 6’0” junior is a fairly local product, coming from Barbe High School in Lake Charles, La.

While in high school, Foster earned all-district recognition in both baseball and football, at second base and quarterback, respectively. Other SEC schools saw the dual-sport athlete’s talent and extended offers in the hope Foster would choose their school.

However, Foster knew where his heart was. Turning down the other offers, he chose to attend LSU. Foster walked on to both the football and baseball teams his 2011-2012 freshman year.

“I grew up an LSU fan and once you get the opportunity, your eyes open big. It’s like, ‘Wow, I get to play at a university I’ve been a fan of my whole life.’ I just took advantage of it,” Foster explained.

Foster has certainly taken full advantage of his opportunities. In the fall of 2011, he competed on the SEC Championship football team as a back-up quarterback.

However, in spring of 2012, Foster made the hard decision that it was best for him to focus on baseball. Despite the agony of letting go one of his greatest passions, he has certainly thrived from being able to devote his time and athleticism solely to baseball.

During his 2012 freshman season Foster was given 27 starts, 14 in left field, eight in center field and five at DH, and he played in a total of 45 games. In 2013, he tallied another 15 games as a starter in right field, playing in a total of 42 games.

Foster has proven to be a key part of the historically successful LSU baseball team. In 2013, during the SEC Tournament, the depth of his talents and athleticism were certainly put on full display. Foster shined, batting for an average of .667 (4-for-6) in three games, with one RBI and four runs scored. It was during the tournament championship game against No. 1 Vanderbilt that he also made an incredible throw from right field to home plate to keep the game tied. LSU eventually posted a 5-4 win in 11 innings to claim the tournament title.

“It was a tight point in the game. The catch made two outs so if I gambled and threw it all the way home we would still be all right. It was a close game so I just tried to catch it and give my all to the plate. I tried to give an accurate throw and they lined up perfectly,” Foster explained.

The 2013 SEC Tournament is only a glimpse of what Foster is capable of. Coming into the new season, Foster, and his teammates and coaches, all expect nothing short of greatness for him. Everyone has now seen what he is capable of and he realizes that he must go onto the field each day with the mindset of getting better.

Foster took full advantage of his summer ball opportunities with the Battle Creek Bombers in the 2013 Northwoods Summer League. He knows consistency at the plate will be key for his career, and that is where he focused during his time in summer ball. Foster batted .373 in 16 games with two homers, 10 RBI and six stolen bases.

“Jared is one of the most athletic guys on the team. I think whenever he is hot he will be one of the best players in the SEC because he is that talented,” Sciambra said.

As the 2014 season begins to pick up steam, Foster hopes to bring in all of the hard work he put in during summer ball and the off-season.

Foster has the desire to produce for his team. After watching his past performances, it is easy to say he has the potential to do just that.

“I want to give it my all and try to help the team win games. You have to treat every game like it is your last. It is a cliché, but it’s true. You have to go out there and battle,” Foster said.