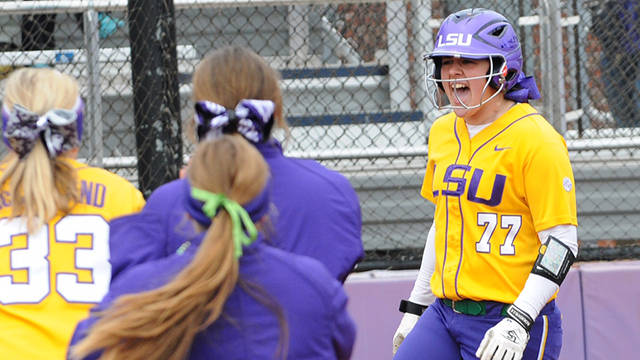 NATCHITOCHES, La. – In brutally cold conditions, the No. 24 LSU Tiger softball team’s icy bats and fielding led to a three-run deficit after just two innings against Northwestern State. However, the team used a four-run fifth powered by a Kellsi Kloss two-run home run to mount a furious comeback and eventually defeat the Lady Demons 5-3 Tuesday afternoon in Natchitoches.

With just two hits through the first four innings of play, LSU (16-6) would earn four base knocks over the next three to score five unanswered runs against the Lady Demons (8-9) to hold on for the victory. Northwestern State did not make it easy as the Lady Demons stranded 11 runners on base over the course of the game and included a bases-loaded situation in the bottom of the seventh.

The reigning SEC Pitcher of the Week in Kelsee Selman earned her fourth win of the season after coming on in relief of starter Ashley Czechner, by holding Northwestern State to just one hit in 4.2 innings of work with two walks and four strikeouts. Czechner struggled and didn’t have a lot of help early, as she lasted just 2.1 innings, allowing three runs, one earned, on five hits with four walks and two strikeouts.

Northwestern State’s Shelby Sells had the Tigers in check for a short while, but took the loss after allowing four runs, one earned, with four walks and three strikeouts. Kaylee Guidry pitched the final two innings, allowing a run on two hits with a walk.

All six Tiger hits came from the very top, middle and bottom of the order led by Kloss who went 2-for-4 with three RBI and a run scored, while A.J. Andrews went 2-for-4 with two runs scored and two stolen bases. Bailey Landry in the nine-hole went 2-for-3 with a run scored as she led off the fifth inning with a single and began the LSU comeback.

Andrews earned a leadoff single to open the game, and then promptly stole second to get into scoring position with no outs. Jacee Blades went deep into an at-bat and got on with a walk to put two on. A sacrifice bunt by Sandra Simmons advanced both to second and third in the hopes of striking early, but a strikeout and deep fly to left ended the inning.

The Lady Demons went up 1-0 after consecutive walks and a double to left field brought in the first run to give Northwestern State the lead in the bottom of the first. Although NWLA had two runners remain in scoring position, they still had two outs on the board and a fly out to Andrews in center was the third to end the threat.

Northwestern State came back in the very next inning and put the Tigers in a three-run hole after getting two runs in the frame on four hits, with an error that kept the inning going.

In the top of the fifth, Landry cranked her second single of the game to reach first to open the inning. A crazy play in left center resulted in an error as Andrews reached to put two on base, with a walk to Blades loading the bases. Simmons nearly pulled off a hit after chopper went off of the glove of the pitcher and to the shortstop for the out, but Landry scored cutting the deficit to two runs.

A scary play happened in the middle of the inning, as head coach Beth Torina was struck on the side of the face on a line-drive foul ball down the third base line, knocking her to the ground for a couple of minutes. After receiving medical attention on the field, Torina was able to walk off of the field under her own power and remained in the dugout for the rest of the game.

Bell grounded out to the second baseman, but Andrews scored to shrink the Lady Demon lead to just one, as Kloss connected on a 0-2 pitch and sent it over the fence in left center to put the Tigers up 4-3. Kloss came back in the top of the seventh and gave LSU an insurance run and scored Andrews who reached base on a single to open the inning to make it 5-3.