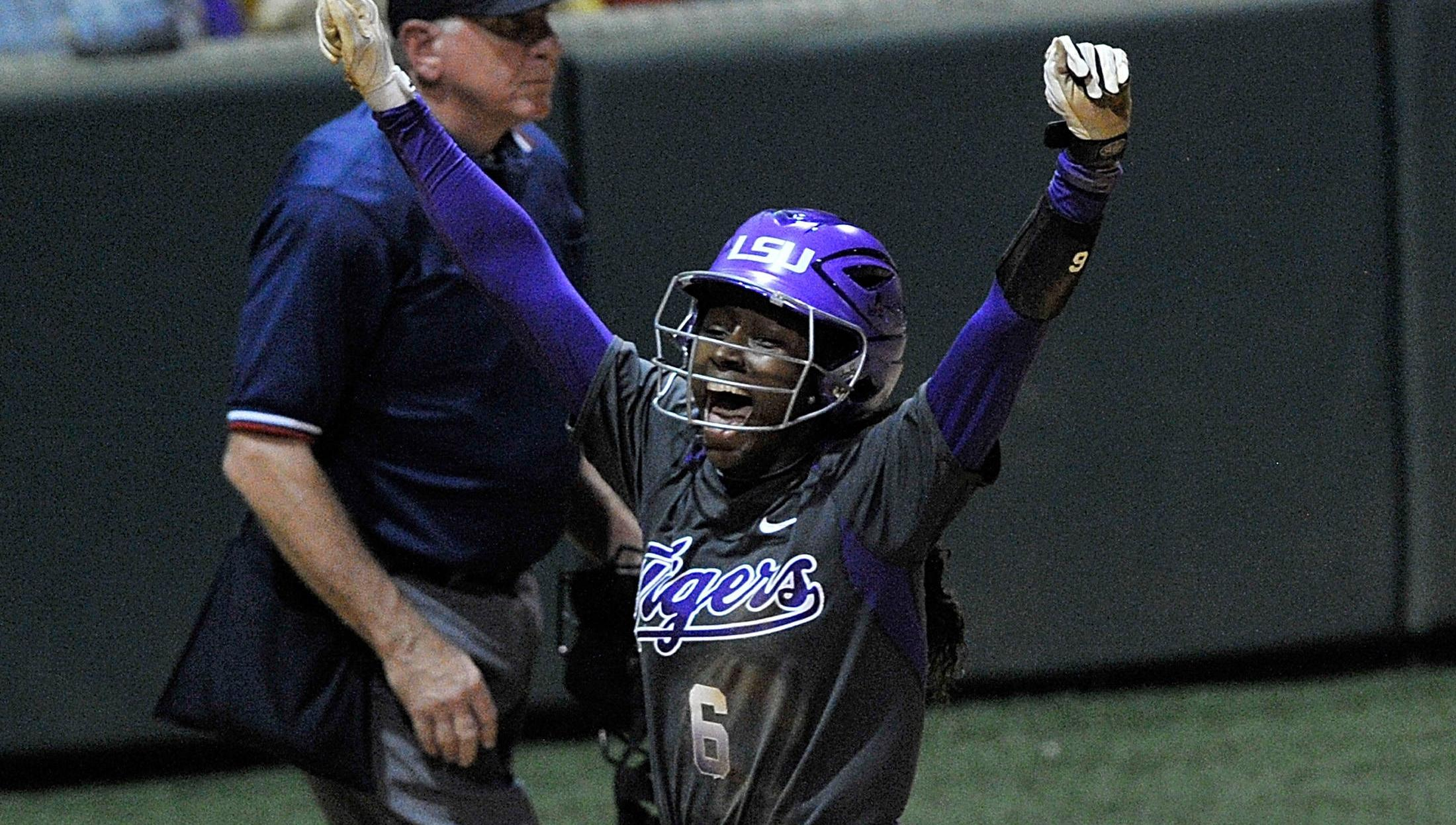 BATON ROUGE, La. – With just three hits through six innings and hoping to avoid a similar fate it fell prey to the previous night, the No. 22 LSU softball team took a scoreless draw into the seventh and got the only two hits that mattered in the game.

A.J. Andrews‘ single allowed the outfielder to advance all the way to third after a stolen base and error, culminating in the game-winning infield single from Sandra Simmons to propel the Tigers to the 1-0 walk-off win over Iowa State at Tiger Park on Saturday.

In a game that very closely resembled the one against Harvard Friday night, the Tigers (14-6) would not be denied a day later as the club was able to deliver the clutch hit and keep the game from going in to extra innings. Iowa State (14-4) outhit LSU 6-5 in the game, leaving 10 Cyclone runners on base as LSU has not given up a score in each of its last two outings up until that point.

Simmons connected on two of LSU’s five hits on the day, with an RBI, while Andrews went 1-for-4 with a run scored. Kellsi Kloss‘ one hit was her fifth double of the season, while Bailey Landry provided the other.

“I saw it off the bat and to her glove,” Simmons said. “For a second, I thought she had it. I didn’t want to go into extra innings. I saw it out, and I was happy.”

Baylee Corbello (7-2) continued her winning ways as she earned her fifth consecutive win and her fourth shutout of the season after scattering six hits with five strikeouts and four walks on 116 pitches. Katie Johnson (14-4) threw 115 pitches and walked three in 6.2 innings of work.

The Tigers had the first opportunity to strike the first blow, as Landry used a bunt single to reach first to open the LSU third. After a pop up and grounder back to the pitcher to push the right fielder to second base, Simmons reached on a catcher’s interference and was followed by a walk to Bell to load the bases. Unfortunately, a pop up in the infield ended the Tiger threat to keep the game scoreless.

With just two hits to their credit, LSU entered the sixth needing to put something together before heading to the final inning with no score between the two teams. With one out already, Bell reached first with a walk and was replaced by Alex Boulet in to pinch run. Kloss registered the third hit of the night for the team with a sharp double down the left field line to advance Boulet to third and put two in scoring position, but consecutive pop ups ended the inning.

In the seventh with the game on the line and two outs, Andrews put down a perfect bunt single to reach first base. The centerfielder stole second and advanced to third after an error to put the winning run 90 feet from home plate. A walk to Jacee Blades put runners at the corners, as Simmons connected for the hit to score Andrews and end the game.

With the chance to close out play at the 2014 Purple and Gold Challenge on a solid note, the No. 22 LSU softball team scored eight runs in the first two innings, thanks to a grand slam home run from Sahvanna Jaquish in the first and three-run home run from Sandra Simmons in the third to power the Tigers to a 10-0, five-inning win over the Lamar Lady Cardinals in the final game for the team in the tournament Saturday night.

LSU (15-6) tattooed both pitchers Lamar (3-8) used on the night as the Tigers exploded efficiently scoring the double-digit runs on 11 hits as eight of the 13 LSU batters on the night accounted for at least one.

Simmons, who had the game-winning hit against Iowa State in the first game of the day, came back to go 2-for-2 with four RBI and two runs scored, while Jaquish’s bases-clearing bomb was her only hit of the night as she plated four runs and scored once. Bianka Bell led all players with three hits, as she earned her fifth double and first triple of the year with an RBI and two runs scored, as she and Simmons were the only two players with multiple hits on the night.

Coming off of the first no-hitter for the group this season, Kelsee Selman (2-0) earned her second-straight shutout after holding the Lady Cardinals to just three hits with seven strikeouts to just four walks. The freshman went three innings before giving up her first hits of the night, allowing just one more in the LU fifth before getting the final batter to fly out to end the contest to run the squad’s scoreless streak to three games.

“I was happy with our pitching all weekend,” head softball coach Beth Torina said. “Hopefully this is a breakout week for Kelsee Selman. She did a great job and dominated. She did exactly what we needed her to do.”

The Tigers were aggressive from the start and it paid off as LSU began the game with a single by A.J. Andrews to put one on. After a sacrifice bunt, Andrews stole third and waited Simmons singled through the left side to give the Tigers a 1-0 advantage. Bell followed that up with a single through the left side as well to put runners at the corners with only one out. After Bell stole second, Kellsi Kloss walked to load the bases for Jaquish who took the 0-1 pitch over the fence in left to make it 5-0 LSU and give the Tigers their second grand slam of the season.

““They did a great job. A lot of them are playing really well,” Torina said. “Sahvanna (Jaquish) scored that ball up tonight. It was nice to see her do that a couple times this weekend.”

In the very next inning, Bailey Landry reached on a hit but was forced out at second after a fielder’s choice with Andrews up. LSU was still able to capitalize as she stole second and got some help as Jacee Blades reached on a throwing error by the Lamar shortstop. Simmons made the Lady Cardinals pay as she cranked the second pitch she saw in her at-bat to right field to clear the bases and put LSU up 8-0.

“We do a lot of hitting during practice, and a lot of us have been doing extra,” Simmons said. “It is helping us out a lot. We struggled this weekend, but we ended on a good note. That is all that matters.”

The Tiger fourth proved to be the icing on the cake as the final two runs came in on Bell’s triple to left center scoring Blades, as the shortstop scored on a wild pitch to put 10 runs on the board for the home side. In that same inning, LSU got hits from Alayna Falcon and Constance Quinn among the three in the inning to put the game out of reach for good.

LSU will be back in action on Monday and Tuesday, traveling to face the ULM Warhawks in Monroe and Northwestern State Lady Demons in Natchitoches.

On LSU’s pitching staff this weekend…
“I was happy with our pitching all weekend. Zero earned-runs for four games is impressive. The only run allowed was in INT. I thought all three were fantastic. Hopefully this is a breakout week for Kelsee Selman. She did a great job and dominated. She did exactly what we needed her to do.”

On LSU’s freshman class making an impact this weekend…
“They did a great job. A lot of them are playing really well. Sahvanna (Jaquish) scored that ball up tonight. It was nice to see her do that a couple times this weekend. Bailey Landry has been a huge contributor. Both freshmen pitchers are doing some nice things. (Bailee) Corbello continues to be dominate. I really like what I see from the whole freshman class.”

On her game winning hit against Iowa State in the seventh inning…
“I saw it off the bat and to her glove. For a second, I thought she had it. I didn’t want to go into extra innings. I saw it out, and I was happy.”

On LSU’s offensive performance this weekend…
“We do a lot of hitting during practice, and a lot of us have been doing extra. Just about everyone who hits is doing extra and spending time there. It is proven and it is showing. It is helping us out a lot. We struggled this weekend, but we ended on a good note. That is all that matters.”

On getting out of jams with bases loaded…
“That is something I’ve had to work through forever. Again, that is walks that I need to get rid of too and different kinds of hits. I trust our defense enough to get out of anything.”