Basketball to Finish Classic Against Butler 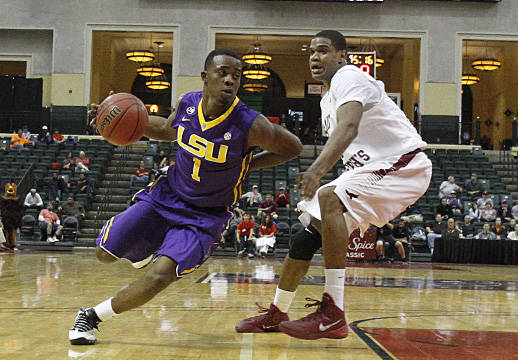 KISSIMMEE, Fla. – The LSU men’s basketball team will look to finish the Old Spice Classic on a high note Sunday when they take on Butler in the third-place game of the eight-team event at the HP Field House at ESPN’s Wide World of Sports.

The game will be televised on ESPNU as the second game of the tournament’s final day at approximately 2 p.m. EST (1 p.m. CST), following the Noon EST fifth-place game between Washington State and Saint Joseph’s. The game will be broadcast on the affiliates of the LSU Sports Radio Network (including Eagle 98.1 FM in Baton Rouge, 3WL 1350 AM in New Orleans) and in the Geaux Zone at LSUsports.net.

Friday, the Tigers came out sharp against No. 21 Memphis, answering ever challenge and opening up a four-point halftime advantage. But turnovers began to pile up on LSU and the turnovers, which finally totaled 24, resulted in a 33-10 advantage in points off turnovers for Memphis. LSU was up 57-49 with 12:32 to play, but Memphis went on a 17-7 run which gave them the lead for good at 66-64 with 3:42 to play.

Stringer was held completely in check by Memphis and was held to two points in the game. Anthony Hickey had the big scoring night with 20 points, while Johnny O’Bryant III had 14 points and Jordan Mickey became the last player on the LSU team to score double figures in every game with 10.

The Tigers gathered at the Josten’s Center at mid-morning on Saturday to try to put the disappointment of the Memphis game behind them and at the same time go over the scouting report for a Butler team that lost its first game (5-1) on Friday in the other semifinal to nationally-ranked Oklahoma State, 69-67,

“We’ve got to quickly put that game behind us,” Coach Johnny Jones said after Saturday’s practice. “You have to learn from the experience of it and start focusing on a very good, very solid team that we will have to play (Sunday) in Butler. We made some errors (Friday). We wanted to make sure that we played with desire, determination and discipline. We thought we did a great job of playing with two out of the three for the most part of the game, but we weren’t as disciplined as we needed to be late in the game to give ourselves a chance to get a victory.”

Butler will go with an older lineup that features two seniors and two juniors. Kellen Dunham, a sophomore, put up the big number for Butler in the opening win over Washington State. Dunham set a tournament record with 32 points, but it was also senior Khyle Marshall posted a career-high 30 in the game. Oklahoma State limited the two of 17 total points. Dunham averages 17.3 points per game, while Marshall is at 16.8 markers per game.

LSU is expected to go with the lineup it has used for three games with O’Bryant III, Martin and Mickey at forwards and Stringer and Hickey at the guard positions. LSU is still averaging 83.2 points per game and averages 47.2 rebounds a game with a rebound margin of +13.7 after out rebounding all six teams. So there are good things to build on, even in spite of Friday’s loss.

“I thought (LSU) challenged (Memphis) well,” said Jones. “From the start I thought we were very aggressive. I thought we did a great job of making plays early – executing out plays and we rebounded the ball well. That was one of the areas we want to make sure we won the war on the boards. We wanted to shoot a high field goal percentage we were able to do that. So there are a lot of good things that happened (Friday). We were just disappointed in some of the areas we weren’t as good in and that’s disciplined enough to take care of the ball late and get stops when we needed to.”

After Sunday’s game, LSU will return to Baton Rouge around noon on Monday and will step away from games for school dead week and final exam period. The final five games of the non-conference schedule will begin on Dec. 14 at 7 p.m. against ULM in a game regionally televised by Cox Sports TV. Tickets for all non-conference home games remain on sale at LSUtix.net.