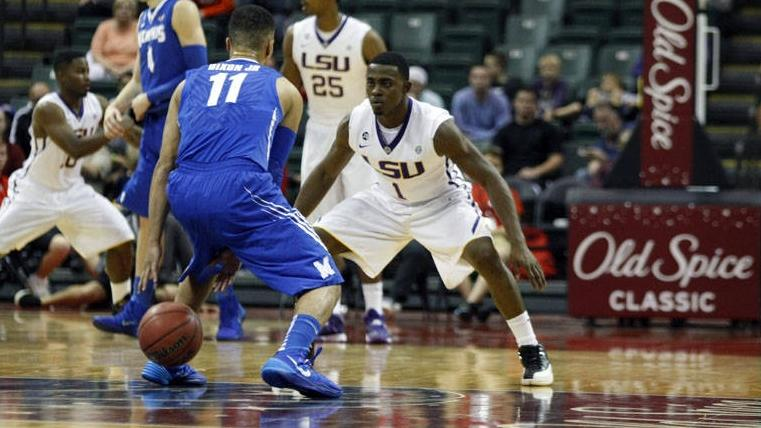 LAKE BUENA VISTA, Fla. – Anthony Hickey poured in 12 of his season’s best 20 points during the second half, but No. 21 Memphis rallied for a 76-69 victory over the LSU men’s basketball team Friday in the semifinal round of the Old Spice Classic at the HP Field House.

With the loss, LSU (4-2) will face Butler in Sunday’s third place game. Tip time is slated for 1 p.m. CT, and the game will be televised by ESPNU.

For Hickey, it marked the fourth time in his career that he has reached 20 points. He was 8-of-19 shooting which included four triples.

Johnny O’Bryant III garnered 14 points, nine rebounds and two assists.  He converted on 7-of-9 from the floor but committed 10 turnovers.

It was only LSU’s fourth loss in 17 non-conference games under head coach Johnny Jones. The 69 points for LSU also was a season-low after the Tigers racked up 80-plus points in each of its first five games.

LSU put together a 30-for-53 shooting effort (56.6 percent), but the Tigers converted on only 5-of-20 three-point attempts (20.0 percent) after they knocked down 10 triples during their quarterfinal win over Saint Joseph’s. LSU also was forced into a season-high 24 turnovers.

All square at 30-30 with 3:18 left in the first half, LSU ripped off eight quick points over the next 98 seconds to grab a 38-30 lead. Hickey nailed a three-pointer followed by a traditional three-point play from Martin and another Hickey jumper. LSU took a 38-34 edge into the locker room.

LSU matched its largest lead at eight points, 57-49 with 12:32 remaining in the second half, after a Malik Morgan driving lay-up.

After a timeout, Memphis fired back with 11 of the next 13 points over the next 3:02 to take a 60-59 edge at the 9:30 mark. Chris Crawford gave Memphis the lead with a transition lay-up off a Hickey missed three-pointer.

LSU would go back ahead by a 62-60 margin with 6:15 left after a Martin mid-range jumper and a Morgan free throw.

However, Memphis responded with an 8-2 spurt capped by consecutive Joe Jackson baskets to put the Tigers up 68-64 with 3:16 to go.

On the next possession, LSU pulled back to 68-66 after a pair of Coleman free throws. The Tigers registered a defensive stop and had a chance to tie, but Memphis forced O’Bryant III into a turnover.

Memphis’ Austin Nichols knocked down a 17-foot jumper with the shot clock expiring on the ensuing possession to make it 70-66 with 1:27 to go.

LSU would get back to within one possession at 72-69 on a Hickey three-ball with 16.8 seconds remaining.

Memphis closed out the 76-69 decision on two Jackson free throws followed by a Crawford dunk after a Hickey missed three-pointer as time expired.

LSU takes on Butler Sunday in the third place game of the Old Spice Classic. Tip time is on-tap for 1 p.m. CT, and the game will be televised by ESPNU.

The LSU Sports Radio Network will broadcast the game on Eagle 98.1 FM in the Baton Rouge and inside the Geaux Zone at LSUsports.net/live. Jordy Hultberg, Ricky Blanton and Kevin Ford will call the action.