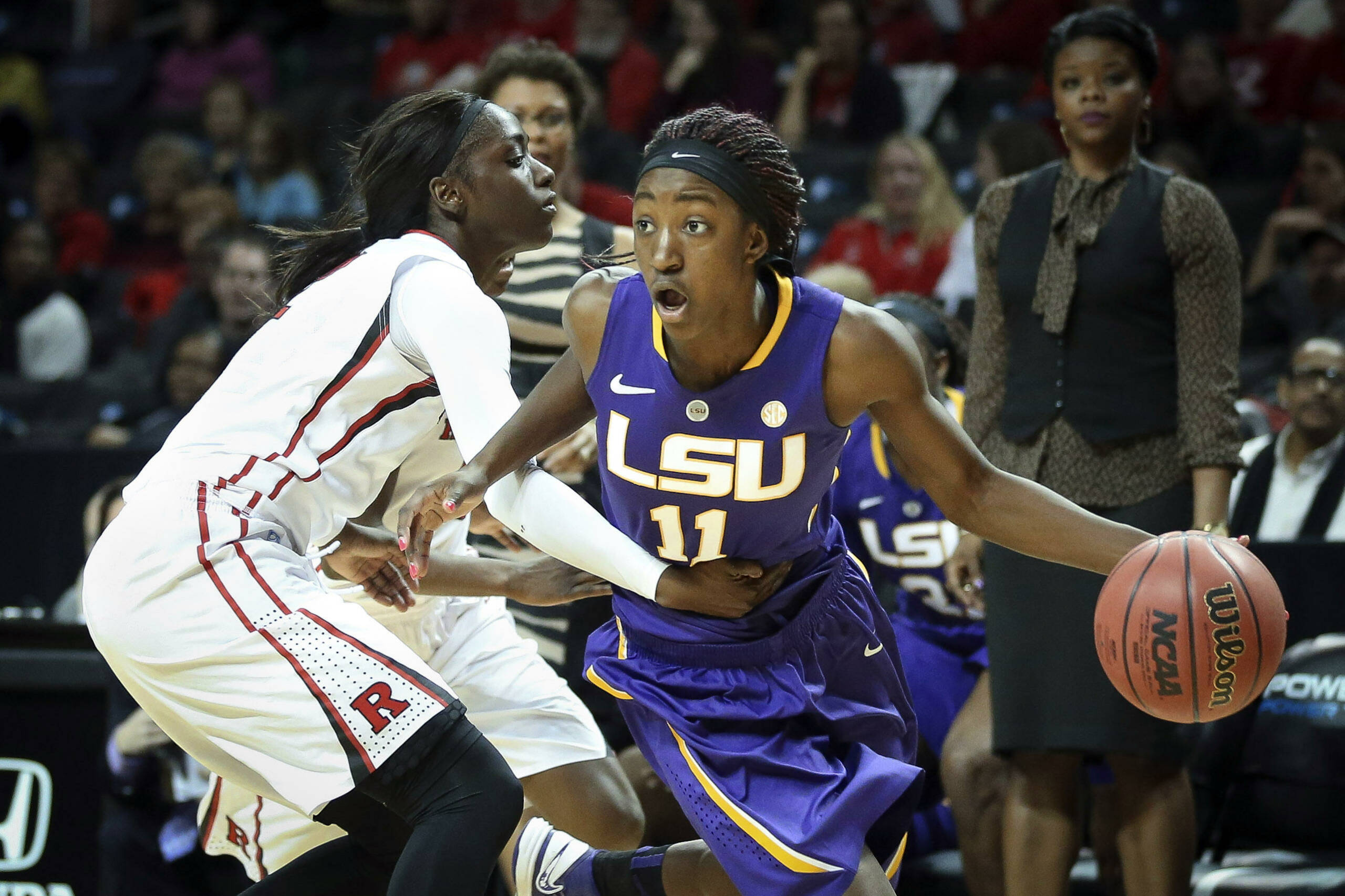 BROOKLYN, N.Y. – Freshman guard Raigyne Moncrief put on a show in Brooklyn, scoring a season-high 27 points with seven rebounds and seven steals as the 15th-ranked LSU women’s basketball team held off Rutgers by a score of 69-65 in the second game of the Barclays Invitational on Friday afternoon in the Barclays Center.

“Our game plan was to really try to play off the bounce and Raigyne did just that for us,” said LSU head coach Nikki Caldwell. “Down the stretch, we wanted the ball in her hands. That says a lot about her. She has done a lot for this team in the short period of time she’s been here. I feel like she’s grown since the Louisville game.”

The Lady Tigers (5-1) claimed their third straight win and will face Michigan in the championship game of the Barclays Invitational at approximately 9 p.m. CT Saturday. The Wolverines (5-2) were an 82-71 winner over Texas Tech in the first game. The Red Raiders will take on the Scarlet Knights (4-2) in the consolation game at 6:30 p.m. CT Saturday.

LSU-Michigan follows 25 minutes after the completion of that contest and it will be carried on the LSU Sports Radio Network on Talk 107.3 FM in Baton Rouge. Members of the Geaux Zone can listen to it at www.LSUsports.net/live. The game will not be televised.

The Lady Tigers, down two players, persevered on Friday and did it with exceptional aggressive defense that forced Rutgers into 29 turnovers which led to 31 points. LSU was without two of its top four scorers in sophomore guard Danielle Ballard and junior guard DaShawn Harden. Both were serving one-game suspensions following an ejection at Louisiana Tech. The two will be back for the Michigan game.

Moncrief was the most athletic player on the floor, going 6-of-16 from the floor and draining 15-of-20 free throws. The 15 free throws finished second in LSU single-game history and the most since Pokey Chatman made a school-record 18 against Georgia on Feb. 10, 1991. Her 20 attempts also finished one shy of Chatman’s school attempts record.

Meanwhile, Moncrief’s seven steals tied for fifth in LSU single-game history. On at least three occasions, the star freshman had at least three steals with to coast-to-coast layups. She poured in 18 points in the second half and that proved to be the difference.

Despite shooting 34.9 percent to Rutgers’ 48.1 percent, LSU’s defense set the tone and led to a 29-25 halftime advantage. That lead grew to as many as 10 points in the second half. Rutgers was plagued by foul trouble, including three quick ones on center Rachel Hollivay, who finished with only six points and four boards.

LSU shot 23-of-33 from the line for the game, but the Scarlet Knights were able to draw within a point following Briyona Canty’s layup that made it 50-49 with 6:29 remaining in the game. After an LSU miss, Moncrief made an incredible steal at the top of the key and went the length of the floor for the score. Jeanne Kenney followed with her second three of the game from the left corner. Plaisance then gathered an offensive rebound and converted a three-point play to culminate a 7-1 run.

“We were tested by their defensive pressure,” said Caldwell. “Jeanne Kenney, Raigyne Moncrief and Rina Hill did a great job of getting us into our action. Once we got the ball into our high post, we had some great looks. I am proud of our team for battling against a very good Rutgers team. We did some good things.”

Caldwell put the ball in the hands of Moncrief for the remainder of the game with the teams in foul trouble. Her aggressive play led to nine made free throws in the final 2:20. Still Rutgers had a chance as LSU got careless with the basketball.

Moncrief turned it over and missed a pair of free throws but Canty’s potential game-tying three from the top of the key clanged off the rim with 0:08 left. Moncrief secured the win and made it a two-possession game with a free throw with 0:02 remaining.