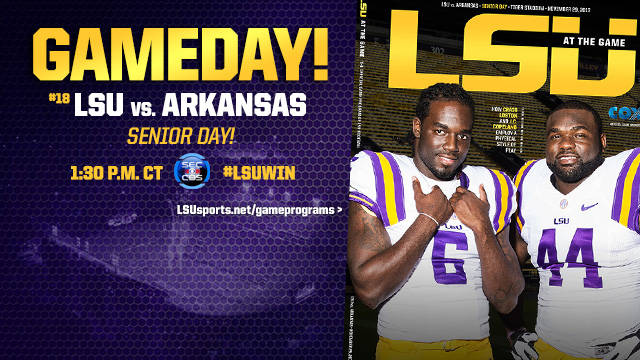 BATON ROUGE – LSU will look to send off its 14 seniors with a win on Friday and enhance its bowl prospects, as the 15th-ranked Tigers host Arkansas in the annual “Battle for the Boot” here in Tiger Stadium.

Kickoff between the Tigers and the Razorbacks is slated for 1:39 p.m. CT. LSU will honor its 14-member senior class with a pregame presentation beginning at 1:15.

“I can tell that you every time that I go to a final home contest, and I turn to say good bye to seniors that have been involved in the style of seasons that we’ve had, the hard work that they have put in, it’s sometimes very tough to say goodbye,” LSU coach Les Miles said. “This group has been part of some outstanding accomplishments. I’m very proud of this group. They continue to raise the bar for future classes at LSU to play to. We are going to miss them.”

Friday’s game will be televised nationally on CBS with Tim Brando, Aaron Taylor and Kristina Akra on the call. The game can also be heard on the LSU Sports Radio Network with Jim Hawthorne, Doug Moreau and Gordy Rush calling the action starting at 11:30 a.m.

LSU, which is coming off its most complete game of the season in a 34-10 win over Texas A&M, is 8-3 overall and 4-3 in conference action.

The Tigers are also 6-0 at home and are one victory shy of recording the 15th undefeated season in Tiger Stadium history. A win will also keep alive LSU’s chances for a fourth-straight 10-plus win season, which would be a first in school history. LSU is 30-1 in its last 31 games in Tiger Stadium, a streak that dates back to the 2009 season.

Arkansas, under first-year coach Bret Bielema, has dropped eight straight games after opening the year with three consecutive victories. The Hogs are 3-8 overall and winless in league play at 0-7.

“It’s a rivalry game and the importance of winning this game is that it counts nine wins and it’s the backend of a season,” Miles said. “You always remember how you played in the last one as the regular season ends. It’s important that we play well for a lot of reasons. We want to make sure we send out seniors off the right way.”

LSU will also send to the field an offense that features two 1,000-yard receivers in Odell Beckham Jr. and Jarvis Landry along with a 1,000-yard rusher in Jeremy Hill, which is a first in SEC history. LSU quarterback Zach Mettenberger is just 74 yards shy of becoming only the third Tiger in school history to throw for 3,000 yards.

Landry ranks second in the SEC in receiving touchdowns (10) and receptions (67) and he’s fourth in the conference in receiving yards with 1,059. Beckham Jr. has caught 56 passes for 1,101 yards and eight touchdowns, all in the top five in the league. Beckham Jr. also leads the SEC and ranks second in the nation in all-purpose yards with a school-record 2,175 to his credit.

The Tigers will hope to take advantage of their explosive offense against Arkansas as the Razorbacks rate towards the bottom of the SEC in points allowed (30.7 per game), total defense (408.3 yards), and passing defense (235.3 yards).

Defensively, LSU is coming off its best outing of the year, holding Texas A&M and Heisman Trophy quarterback Johnny Manziel to a season-low 10 points and just 299 total yards, nearly 300 below its season average.

Barrow leads the Tigers with 80 tackles, while junior linebacker D.J. Welter has 65 tackles and sophomore linebacker Kwon Alexander 57 tackles. Defensive end Danielle Hunter has been the most productive of LSU’s defensive linemen with 50 tackles, 5.0 tackles for loss and a pair of sacks.

The Tigers will face an Arkansas offense that will rely on its running game as the Hogs are averaging 211.1 yards on the ground per game. Freshman Alex Collins ranks sixth in the SEC in rushing with a total of 998 yards and four touchdowns.

As a unit, he Hogs are scoring just 20.1 points a game, which ranks 13th in the league.

“They play hard every week and they will come in here ready to play,” Miles said of the Razorbacks. “They are a very specific challenge.  Our football team will go no further than watching their film to figure out that they are very capable and that we are going to have to play well.”