In Focus: Keeping the Faith 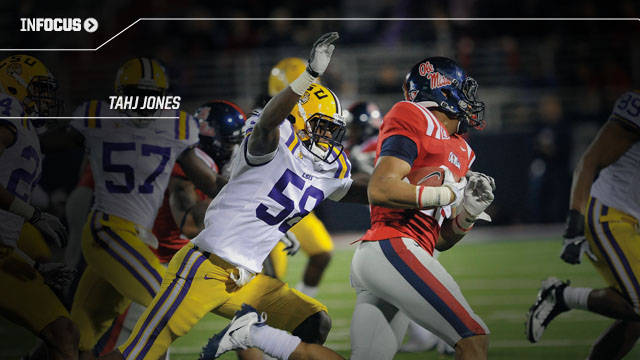 Despite his ups and downs, senior linebacker Tahj Jones never gives up in a battle. His faith is too strong to quit.  Jones has a nagging hamstring injury that has been keeping him out of Southeastern Conference play this season, but he still keeps his positive attitude.

“If I’m out like this, God has a plan,” Jones said. “He has a plan for everything. That’s why I just stay on my faith and ride it out and get my degree.”

Jones grew up in Sulphur, La., which is 15 minutes west of Lake Charles. Any time he could, he was outside playing any sport imaginable whether it was football, basketball or baseball.

“Saturday mornings I was always the first kid outside trying to play something.” Jones said. “I was always outside. If we found a stick on the ground we’d just start playing with that.”

While in Sulphur, Jones lived with his mother until she passed away in 2005, shortly before he started his freshman year of high school. Jones’ brother dropped out of school at 18-years-old to take care of Jones and his sister.

Jones said playing football helped deal with the passing of his mother. Once he was done with practice at school, he would walk home and start playing football in the neighborhood with his friends. Jones also said constantly playing helped him get better at football.

The family of Jones’ best friend, Isaiah Ryan, embraced Jones as if he was their own son. They took him on family vacations, included him in Christmas celebrations and even gave him Christmas gifts.

“I stayed over there at least four times a week.” Jones said. “If I wouldn’t stay there, early in the morning I’d go over there. They’d be the first people to I’d go to.”

They also went to church, choir rehearsal and Bible study together. Jones learned his faith from the Ryan family.

Because of his faith, Jones never gives up when facing conflict. In high school, he dealt with the death of his mother. In college, he dealt with academic ineligibility and an injury. But through it all, his faith helped him get through it.

During his sophomore season (2011), Jones had what some call a “breakout season.” He played in all 14 games, including one start, and recorded 27 tackles and an interception.

In his junior season, he was ruled academically ineligible. He only played in the Chick-fil-A Bowl game where he recorded four tackles, one sack for a seven-yard loss and a fumble recovery.

He said talking to LSU coaches John Chavis and Brick Haley, who are his father figures, has helped him a great deal. Throughout the past two seasons, they’ve helped him through the tough situations and encouraged him when he needed it the most.

“Coach Chavis and Coach Brick are so wise,” Jones said. “I’m always trying to listen to what they’re saying because you never know when you’re going to need it.”

Before graduating high school, Jones began a friendship with current LSU linebacker Lamin Barrow. Barrow commends Jones’ strength during his struggles, saying others wouldn’t have handled it the same way.

“A lot of guys in his situation would have gone belly-up and quit,” Barrow said. “Tahj just kept pushing. He was always upbeat and uplifting.”

Barrow said when Jones’ injury caused him to lose his starting spot to the younger Kwon Alexander, Jones didn’t sulk or become angry. Instead, Jones showed Alexander the ropes.

“Every step of the way he has been on Kwon and showed him how to do different things,” Barrow said. “He showed him how to make his game better. If it weren’t for Tahj, I don’t know where Kwon would be right now.”

When Jones graduates, he wants to be remembered as a hard worker who was always grateful for his opportunities. He’ll be the first in his family to earn a college degree.

“I come out and work every day,” Jones said. “I don’t complain about anything because I’m just happy to be breathing. I want to be remembered for working hard at everything on the field, on the practice field, in the classroom and leading the little kids.”