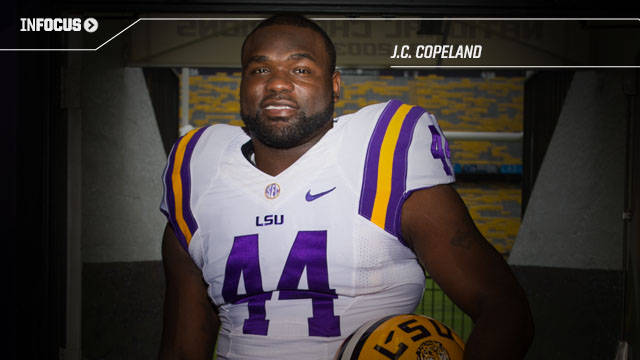 Bruising Fullback J.C. Copeland is an Inspiration to Young People

Senior fullback J.C. Copeland is leaving it all on the line in his last season at LSU.  The LaGrange, Ga., native is playing for much more than the fame and glory of the game.

Copeland strives to be the best he can be every day for his family, team and community.

The 6-1, 270-pound wrecking ball was recruited by LSU as the No. 17 defensive tackle in the country and one of the top defensive prospects in Georgia as a senior in 2009.  It wasn’t until preseason camp in 2010 that LSU offensive line coach Greg Studrawa noticed Copeland’s potential at the fullback position.

“He asked me if I’d ever played fullback,” Copeland said. “Lucky thing somebody didn’t ask me if I played quarterback.  The next day I was in the running backs room. I wondered what I had gotten myself into. I said if I was going to do it I might as well be the best at it.”

Since the drastic change from defensive tackle to fullback, Copeland has become a punishing blocker and offensive threat to opposing teams. He stepped in as the starting fullback his junior season and accounted for 21 carries with four touchdowns. This season he has only played in eight games due to injuries, but has accumulated 13 carries and three touchdowns.

When Copeland is asked about his individual game and success he humbly answers, “I’m still trying to achieve a couple of my goals. I just want to be the best fullback and teammate I can be. I am still working at it.”

Copeland’s drive and ambition comes from the support he receives from his family. Growing up with three younger sisters, Copeland’s mother struggled to make ends meet. To find work, she and her three daughters moved from LaGrange, but Copeland, thinking he would be less of a financial burden, stayed behind.

With no place to stay, Copeland received help from his high school football coach, Bubba Jeter. The Jeter family opened their home to Copeland, and the fullback gained love and support from his new family.

Throughout his four years at LSU, Copeland has found another family support – his teammates. “We are pretty much brothers,” Copeland described. “We spend most our time together. You really have to build a relationship in order to be a team.”

The bonds and support that Copeland receives from his coaches and teammates drive him to work hard each and every day.

“I really want to be the best player I can possibly be for my team,” Copeland said. “My goal is to be a player on this team that can help us win.”

With his size and power, Copeland is a promising short-yardage and goal line option for LSU’s offense. Copeland also creates havoc for opposing defenses by making catches in the flat. Last season, he recorded a 42-yard reception against Alabama.

“He puts his body on the line for us every day, so it’s great when he gets a chance to do something with the ball in his hands,” LSU running back Kenny Hilliard said. “He’s got size on him, and he’s strong. He’s a big bruiser. That’s the type of fullbacks we like here. He gets the job done. It’s great to have J.C. in front of us.”

If Copeland isn’t working hard to be the best he can be on the football field, he is taking time out of his schedule encouraging and helping children. The senior fullback is heavily involved with the Big Buddy Program at Dufroq Elementary School.

“I go every Tuesday and Thursday morning,” Copeland explained. “I work with the preschool program. I try to entertain the kids, but they are more of an entertainment to me. I really enjoy hanging out with them and getting to know the little kids.”

Community service is an important aspect of Copeland’s life.

“I feel like it is always good to give back to the community because there is always someone looking up to you,” Copeland said.

When Copeland returns home to Georgia during his time off, he makes sure to take time to reach out to his former elementary school, middle school and high school as well.

“I love going back to my school and visiting with the kids,” Copeland said. “I just want to show them I was here once, and I know what you’re going through. I always try to explain to them that there is always a way out – a positive way out.”

Behind the intimidating force, the big hits and powerful runs, Copeland’s motivation is simply the people around him. The fullback is playing for his family who showed him love when he needed it the most, his team who has supported him from his very first practice and the community who motivates J.C. to be a positive example.

As the 2013 football season winds down, Copeland will continue to work hard toward his future plans. Copeland is graduating in May 2014 with a degree in sports administration. He plans to continue his football career at the next level in the NFL, and later become an athletic director and high school football coach for his former high school, Troup County High School.

Copeland is the person, regardless of the circumstances, determined to make something out of himself. For Copeland each day is an opportunity to be the best, not just for himself, but also for the people around him.