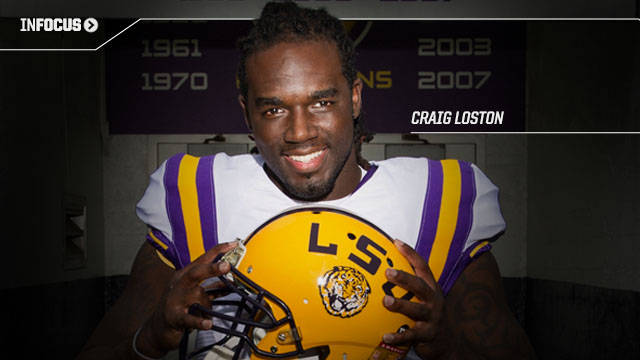 After what has been called a “mass exodus” of 10 football players who left LSU for the 2013 NFL draft, Craig Loston chose to remain on campus for his senior season. The 6-2, 209-pound LSU safety’s decision proves not only his dedication to football, but also to his college education.

“I was just not ready yet, I love LSU,” said Loston, a product of Aldine, Texas. “I wanted to experience my senior year and really not regret anything when my time was up here.”

He is a fifth-year senior who was given a redshirt season after a hand injury his freshman year.

“I love that commitment. It’s special, and when you see it in an older guy like Craig, it means a lot to you as a coach,” said John Chavis, LSU’s defensive coordinator.

The commitment of Loston is a testament to who he truly is. Many of his seasons have been plagued by ongoing injuries that seem to creep back shortly after returning to health. Loston has never stopped fighting through the adversity in his attempt to leave a legacy at LSU.

Loston has used his fifth year to his full advantage and is on track to graduate in December with a degree in theater.  Many are perplexed by the idea of a Division I football player being so involved in drama and plays. However, this is undoubtedly a passion for Loston, who started his acting role during high school.

Loston nonchalantly explained his high school career. “When I would get done with football practice, I would just go over to acting,” he said.

A college degree can certainly be considered invaluable, and Loston seems to have realized its importance.

“I was three classes from graduating and that was another big reason I came back; it is an improvement for my future,” Loston said.

As well as striving for greatness for himself, Loston finds drive in the ability to be able to provide for his two-year old daughter, Cy’Lyn Loston.

“It is a blessing. When you have a child, you want to be there for them through thick and thin,” said Loston.

Knowing that he must be there for his daughter has only contributed to his drive to fully dedicate himself to every aspect of his life. Not only does Loston strive to provide for his own daughter, he is persistent in his attempt to make a difference in the lives of others.

“Coming from the place I came from, you do not have many role models to look up to,” he said. “So, whenever I get a chance, I always want to give back.”

He has spent his time volunteering for many different organizations and finding ways to become involved within the community.  He visits St. Luke’s School and speaks with the children when he can.  He has also participated with the Big Buddy Football game and the Young Hero Program. Loston has even built a lasting relationship with a young member of the Young Hero Program, calling her his “little sister.”

Loston has also formed great relationships with his fellow teammates, particularly Lamin Barrow. Barrow is a linebacker at LSU who also chose to return for his senior season.  The two have formed an instantaneous bond, one that began the day they “stepped on campus together.” This bond only reveals more of Loston’s true character. Lamin describes the relationship as that of “brothers,” saying that “sometimes my own mother mixes us up.”

Knowing the value of returning to finish his college degree also proves the perspective Loston has about the future. He is aware that no one is promised anything. The only way to achieve one’s goals is to work hard and fight through all adversities.

And adversities have not missed him. After completing high school, Loston was a five-star recruit with a promising football career ahead of him. Although he has had a successful career at LSU, the path has not been easy. Injuries plagued him along the way. Nearly each time he returned to health, a new injury would sideline Loston. Fortunately none of the injuries have been career-ending. His most serious ailments include a hand injury in 2009 which resulted in a redshirt season, and a concussion during the 2011 West Virginia matchup.

Despite the difficulties, Loston never gave up and continued to fight for his college football career.

“If God continues to bless me, I will play football,” Loston said. “But, I also have another option.”

Acting will be the first career pursuit for him if football is not in his future. Acting is undoubtedly another passion in his life. It is clear he will find great fulfillment in being able to chase his dream when his football career is over. However, if acting should fall through, he once again looks to finding a way to help others.

“If acting does not work, I would like to be able to go back and coach; I just want to be able to give back in whatever I do,” were the resounding words from Loston.

Even in his career goals, Loston returns to wanting to help others. The humility he displays is an incredibly admirable trait; a trait that will take him far in life, helping him to find happiness in nearly any goal he may chase.