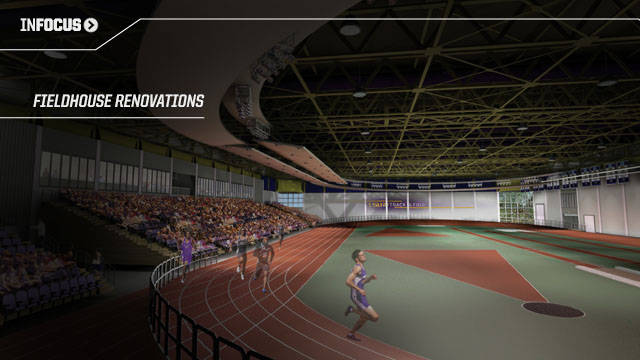 In an effort to continue the growth of LSU Athletics and rival top Southeastern Conference programs, the LSU Track & Field program is the beneficiary of an extensive renovation project to the Carl Maddox Field House that will benefit both the men’s and women’s squads.

Highlighting the updates is the addition of locker rooms for both the Tigers and Lady Tigers, featuring 52 lockers per team, so every student-athlete will receive his or her own locker. The complex will also feature a newly-built team meeting room equipped with multimedia capabilities.

“To my knowledge from the 19 years that I’ve been here, we’ve never had locker rooms,” said LSU coach Dennis Shaver. “We’re excited about being able to have the convenience of having a locker room right at the facility as well as a place to have team meetings. Our team meetings have normally been taking place in our weight room.”

In his 10th season as head coach of the Tigers, following nine years as assistant coach, Shaver sees a bright future for the program, especially in recruiting.

“When you bring prospective student-athletes here for official visits, they have the opportunity to look at all of our facilities,” he said. “Then they visit other competitors’ venues, and many schools we recruit against have had these types of facilities for many, many years. Certainly, I think it’s going to have a positive impact upon the general needs and accommodations that all the athletes are experiencing on other campuses. Now they’ll be able to experience it here, too, during their recruiting visit.”

Other changes to the complex are taking place in the competition arena, particularly the track and infield. Meets will be streamlined with the addition of a second runway for the long jump and triple jump events, as well as a new runway for pole vault competitions and new throwing circles.

“Almost all indoor venues that you compete at have two long jump/triple jump runways to expedite the length of the track meet,” Shaver said. “When we host competitions, we’re hosting long jump and triple jump for both men and women. So it’s really four different competitions on what used to be all one runway. That would be the first event that we’d start and would be the last event to end at most of our competitions, so it was really not fair to the athletes to have to experience this.”

“It’s the same surface in international competitions, particularly in the Olympic Games,” Shaver explained. “Most of the venues that we go and compete in, both indoors and outdoors, have that running surface. It’s good to have the opportunity to train on that same surface, and that’s probably the main benefit of adding that surface for our athletes. It’s the same surface that their championship meets, for the most part, are contested on.”

These highly-anticipated updates to the facility will continue the progress of both the Tiger and Lady Tiger teams.

“I certainly would expect that when (the Field House is) done, and (the student-athletes) have an opportunity to move into it, that there’s going to be a lot of excitement,” Shaver said. “It’s good to see the building getting a good facelift for the first time. I think the building is about 40 years old. This is really the first thing that’s been done to it in all this time. The running surface is the same surface that’s been down there all these years, so you can only imagine.”

LSU Track & Field kicks off the 2014 indoor season in Birmingham, Ala., on January 18 as the teams compete at the Auburn Indoor Invitational. They will make their debut at the renovated facility at the Carl Maddox Field House on February 21 when they host the LSU Twilight meet.