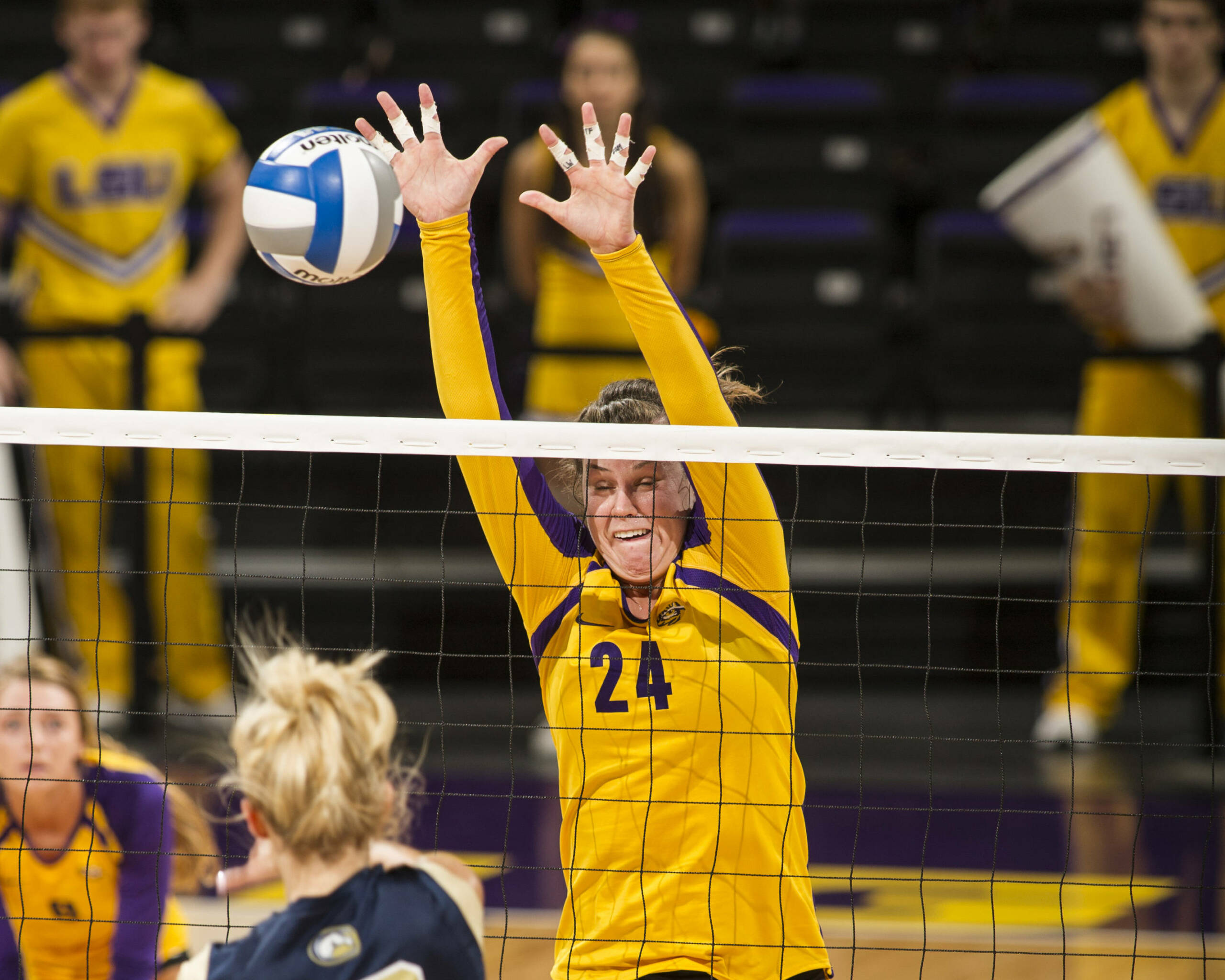 Malorie Pardo fueled a balanced attack with a solid all-around performance of 32 assists, four digs, three kills, two aces and two blocks. She ignited the Tigers to 45 kills on an efficient .305 team hitting percentage, LSU’s highest mark since a .317 output against Mississippi State on Oct. 13.

The Tigers connected for seven service aces which were LSU’s second-highest total of 2013. USC was limited to 35 kills and a .198 hitting clip.

“As a coach, you can tell how focused a team is by how efficient and effective they’re hitting their serving zones,” head coach Fran Flory said. “We were head on, stayed within our gameplan and didn’t try to do too much. I appreciate the effort and focus the players showed. They responded very well, the best performance we’ve had all season in the serving game. If we are able to keep this type of focus, we’ll be able to be successful in our final two matches and beyond.”

Leak’s .478 attack percentage was a season’s best, and the second-highest ratio of her career only behind a .484 mark during LSU’s five-set win at Georgia last season. She also added seven digs and a pair of aces.

“The game plan was to set the middles as many balls as we could,” Flory said. “I think our passing tempo affected that and changed our offensive rhythm. Malorie was able to make that adjustment, and I thought Cati had some great swings and hit some smart shots.

Desiree Elliott belted 11 kills and recorded four blocks off the bench. The Tigers have won five of their six matches when Elliott reaches double digit kills this season.

“Desiree has been a great team player all season,” Flory said. “She’s done a lot of positive things behind the scenes that people don’t get to see. I’m proud of her and appreciate her effort. She will play this last stretch of her career in a LSU uniform with a point to prove. We changed the lineups based on matchups, and it’s nice to have someone like Desi step into that. We needed a faster pace, and that’s what she provided to us.”

Briana Holman tacked on seven kills and three solo stuffs, while Helen Boyle chipped in five kills and eight digs. It marked only the fifth time that Holman was unable to collect 10-plus kills.

LSU’s back row sprawled out for 43 digs led by Katie Lindelow‘s 11 scoops followed by Haley Smith‘s 10 scoops. It marked the 22nd time for Lindelow and 21st time that Smith garnered 10-plus digs.

“We wanted to focus on going out on the court and having fun,” Elliott said. “As a team, I thought we played well together. We made a point that no matter what happened; we knew someone was going to step up for us. We stayed calm, we stayed relaxed and everyone had each other’s backs. That’s what made it easy and allowed us to be successful.”

The two teams split the first 18 points of the opening set before LSU ripped off four straight points to build a 13-9 advantage. The Tigers received kills from Lindelow, Holman, Boyle and Leak to ignite the charge. South Carolina used three blocks to fire back with seven of the next nine points to grab a 16-15 edge. However, LSU put together a 9-3 finishing kick to claim the 25-19 victory. Boyle and Elliott popped two kills apiece to aid the spurt.

The Tigers fell behind by a 12-8 margin to begin set two, but Leak cranked back-to-back kills coupled with consecutive Pardo aces to knot the score at 12-12. With the Gamecocks up 17-16, LSU put together another four-point flurry aided by a Leak kill, a Boyle kill and an Elliott-Pardo block to snatch a 20-17 lead. The Tigers tucked away the 25-21 win on Leak’s seventh spike of the frame.

“We approached the match with a carefree attitude, and I thought that was a key for us,” Leak said. “Even though we’ve had some struggles in the past, that doesn’t change us because we know we are a good team. We believe in each other. Everyone stepped up and took care of their job.”

LSU wiped away a 13-10 deficit during the third set and caught fire with six straight points to seize the momentum. Elliott nailed two kills and registered two solo stuffs to put the Tigers ahead 16-13. She blasted three more kills and added another block as LSU finished strong with 15 of the last 19 points to capture the 25-17 victory.

“The best thing that happened through this match is that South Carolina put some pressure on us,” Flory said. “We could have hit the panic button and bailed out. Overall, our team mentality was we were not going to be broken. Even when we were down in sets two and three, there wasn’t a panic. The players did a good job of figuring things out on their own out there on the floor. If they’ll understand that they control the outcome on every touch, this team will continue to get better.”

LSU wraps up its run of six of eight matches on the road Wednesday at Ole Miss. First serve is on-tap for 7 p.m. with free live audio and live stats available inside the Geaux Zone at www.LSUsports.net/live.