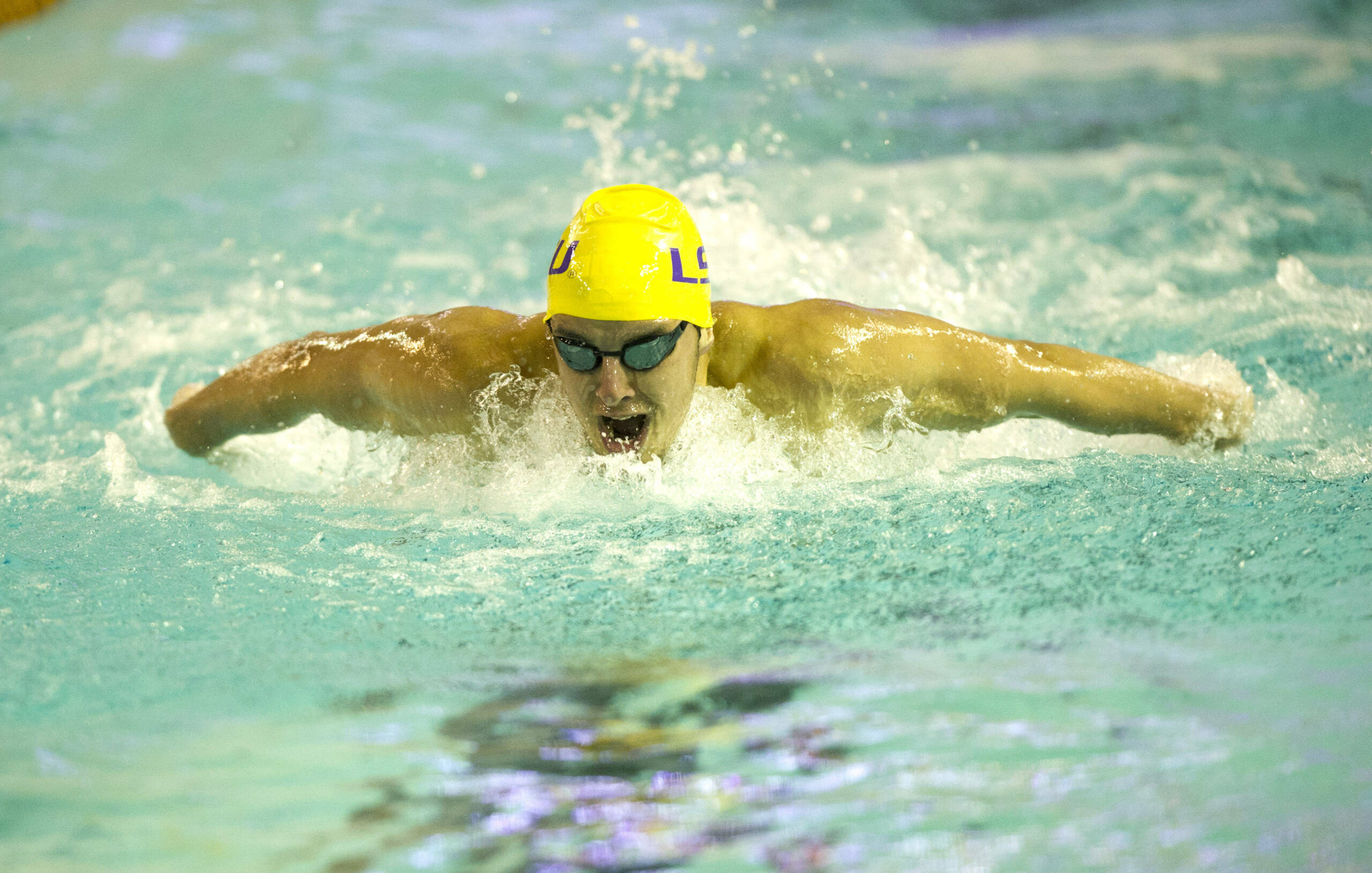 COLLEGE STATION, Texas – LSU Swimming and Diving wrapped up the Art Adamson with another successful day in the pool including a win by Frank Greeff in the 200 butterfly with a mark of 1:44.77. That time was almost four seconds faster than the second place finisher.

“Frank is such a tough competitor. To knock out that fly as his twelfth race of the weekend shows how disciplined his training has been,” LSU swimming coach Dave Geyer said.

For the first time this season LSU Divers took to the platform in a competition setting. Cassie Weil, the LSU record holder in that event, won the women’s platform with 270 points. Alex Bettridge placed third with 236.10 points.

For the men, Sean McKinney finished in third with 349.30 points and Kevin Leong tallied 321.20 points for fourth place.

“We can expect some really good results going into the championship season,” LSU diving coach Doug Shaffer said. “We did some remarkable things throughout the weekend, which is a testament to the hard work and dedication that our divers have put forth so far this season.”

In championship finals, Danielle Stirrat finished eighth in the 200 backstroke with a mark of 1:56.10. Sophie Weber touched the wall last with a mark of 1:58.83 but it’s the sixth fastest time in LSU Swimming history.

Sophomore Alex Linge finished fourth in the men’s 100 freestyle with a mark of 44.53.

Ricardo Alvarado Jimenez touched the wall second in the 200 breaststroke with a time of 2:0.74. Gabe Rooker followed him in fourth place with a mark of 2:02.32.

Kara Kopcso continued her phenomenal freshman campaign with a time of 1:59.08 in the 200 butterfly. Kopcso’s time is enough for fourth in LSU Swimming history.

To finish off the invitational, LSU’s “A” men’s team consisting of Alex Linge, Marco Gonzalez, Michael Saco and Frank Greeff finished second in the 400 relay with a time of 2:57.25.

LSU’s “A” women’s team finished fifth in the 400 relay with a mark of 3:25.35. The women’s team consisted of Leah Troskot, Megan Cox, Sophie Weber and Amber Carter.

In the consolation final of the men’s 200 backstroke, Daniel Swietlicki finished third with a time of 1:48.37.

“This was a really great weekend for our program,” Geyer said. “It was exciting to see some development from our freshmen classes. Our upperclassmen also did a terrific job. We are certainly ahead of where we were a year ago”

The LSU Divers return to competition when they travel to Austin, Texas for USA Diving Winter Nationals, Dec. 17-22.