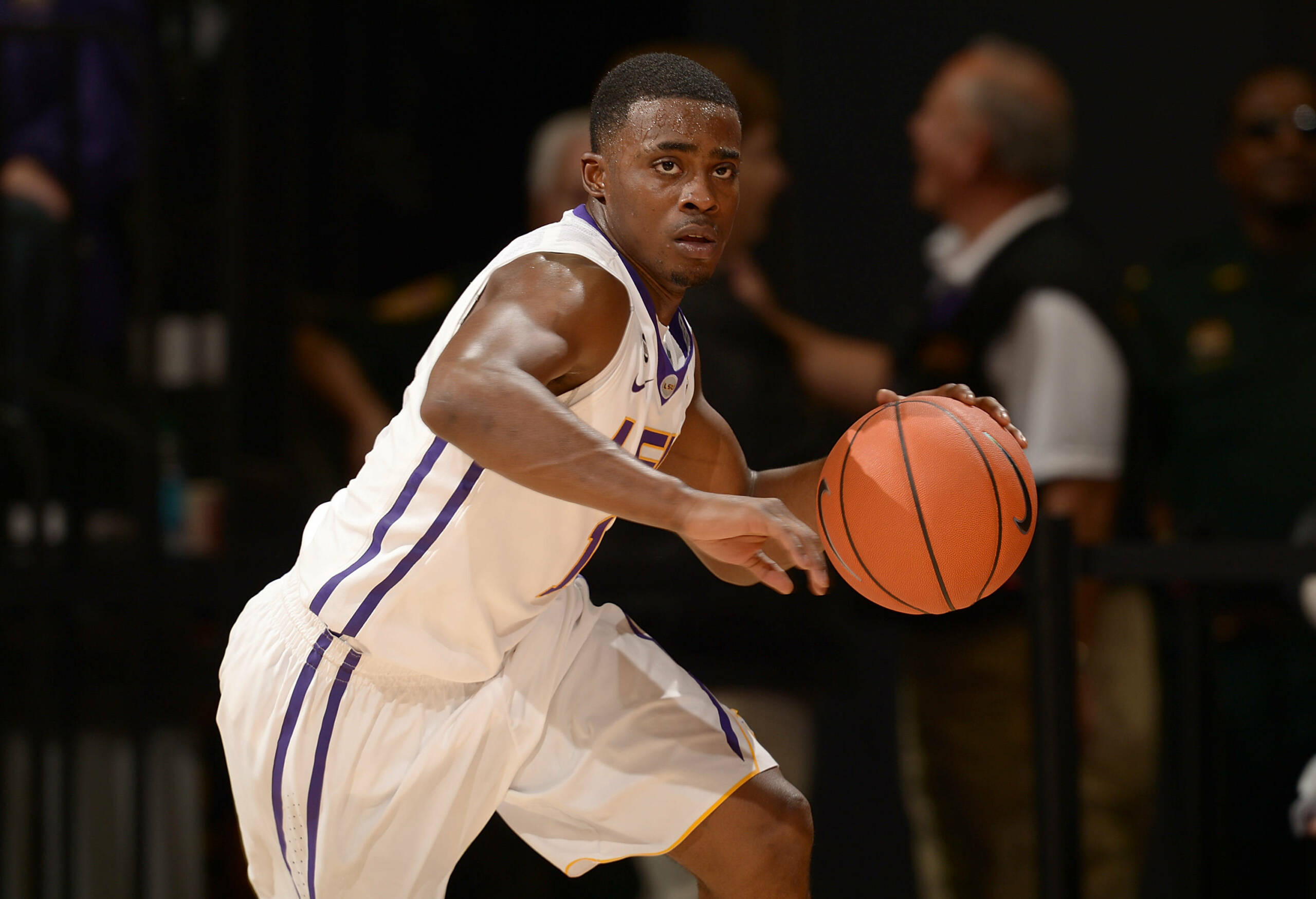 Eleven Tigers scored in the contest including Jordan Mickey with 17, Andre Stringer with 12 and both Anthony Hickey and Shavon Coleman with 10.

Along with 4-of-8 field goals, O’Bryant made 10-of-12 free throws in 30 minutes of action. Stinger and Hickey were also 4-for-8 from the field, while Hickey dished six assists and had seven steals. Mickey made 8-of-10 shots with five rebounds, five blocks and two steals.

The Tigers shot 52.5 percent (32 of 61), while SLU improved upon its 26-percent effort in the first half to finish 25-of-65 (38.5 percent). The Lions made their first six three pointers in the second half to cut a 26 point LSU lead to eight but cooled off in the final eight minutes.

LSU (3-1) departs for Orlando, Fla., on Wednesday and will play three games in the Old Spice Classic starting Thanksgiving night at 7:30 CT against St. Joseph’s. The Tigers will then face either No. 11 Memphis or Siena on Friday and complete bracket play on Sunday. All games will be broadcast on the LSU Sports Radio Network and televised by the ESPN family of networks.

Onochie Ochie was 6-of-10 to lead Southeastern Louisiana with 17 points. Julian Chiera made 3-of-5 from long range to add 13 points. SLU’s bench accounted for 32 of its 66 points.

The Lions were outrebounded by the Tigers, 45-29. Each team committed 17 turnovers.

Early on, LSU used an 8-0 run to jump out to a 10-2 lead and extended the advantage to 20-4 with a Hickey three pointer that capped another 10-0 Tigers run. While SLU managed only 2-of-16 field goals in the first eight minutes, LSU was 9-of-15 shooting.

Martin, who injured his ankle 30 seconds into the Tigers’ season opener at UMass, scored his first basket on a mid-range jumper from the left wing that pushed LSU’s lead to 35-15 with 7:23 left in the half.

Southeastern Louisiana turned around its shooting in the second half to give the Tigers scare. The Lions made their first five three pointers and hit 11 of 16 shots to start the half, cutting the LSU advantage from 26 to eight, 62-54, with 9:29 to play.

SLU’s sixth three pointer in as many second-half attempts came too late. A 17-LSU 5 run was highlighted by an alley oop dunk by Mickey from Hickey. As SLU began missing threes, Coleman scored the last five points and as LSU’s lead ballooned back above 20, 79-59, with less than five minutes to play.

Opening Statement…
“I thought our guys did a great job – a much better job tonight – of getting off to a really good start. We had a much more productive first half of basketball tonight. I thought defensively, they were able to help each other rotating, very aggressive getting to the ball, containing the basketball, contesting shots, rebounding and getting out on the break. At the same time, I thought our execution on the other end of the floor was really good for us. We settled for 50 percent [shooting] in the first half, sharing the basketball [and] were making the right plays. I thought we did the things we needed to do. I thought in the second half we came back out the first five minutes, really established ourselves and played well. I thought that was really important for us, but I wanted to make sure that we put two good, solid halves together. But in the middle, I thought Southeastern did a great job of not going away, continued to compete, played well [and] I think came down to hit five or six threes. We didn’t respond well – one, defensively getting to their shooters and putting more pressure on them. On the offensive end, we went through a stretch of not scoring because I thought we just got caught up in the game, lost concentration for a few minutes and allowed them to make a run at us. But overall, I’m pleased with the game and I know that we have to continue to grow. I thought we made a much better effort tonight than the last game versus New Orleans.”

On Jarell Martin’s performance…
“I was going to call Coach Miles initially and tell him I was going to send him over there because he made two real aggressive plays and picked up two quick fouls. That’s a part of it, and that’s why we’re glad that he was able to get his feet back under him tonight. It was important for us to have him back out on the floor prior to next week. We knew something like that could happen because he hadn’t been playing. This is his first time getting back in action since the beginning of the season. He was excited about it, and I think being overaggressive early, but he was able to settle in because I put him back in with two fouls in the first half. I thought he settled in and played well afterwards.”

On the balance and depth of this team …
“I think we’ve got really good balance and depth on this team. I thought Shavon Coleman came in and gave us some positive minutes tonight. When (Tim) Quarterman got in, although it may not have been a basket, I thought he made good feeds to Darcy (Malone), and Darcy was able to finish there in the first half. I thought they were able to spread it around. (John) Odo came in, was fouled and knocked down his two foul shots. So, what you want is productivity from those guys, and I thought they were able to deliver when they came in tonight. You don’t want any slippage, and you didn’t get that. They allowed us to be a more confident basketball team when they were in as well.”

On handling a run from the opposition …
“I think one of the things is that you want to respond the right way when teams make a run at you. I thought we were able to do that. After the timeout (Southeastern) came out a little bit more focused. They were able to dig in and play better with more attention to detail. That’s something that you really look for. You certainly don’t want a team to make the run that they did. I forgot exactly what the score was, but they cut it to ten or eight at one point. You want to respond a lot quicker than that. You know that basketball is a game of runs, and it’s going to happen. You have to make sure that your cognizant and conscious when those things happen. Offense is where you’ve got to get better, making plays and making sure that the next possession is cherished as well. You can’t get caught up in the score of the game, and I thought that was kind of where we lost our focus and concentration.”

On the success of the press tonight …
“It wasn’t so much them. It’s more us. We’ve continued to work on it and trying to build it. I thought our guys did a great job of rotating at it tonight. We had the bodies there, the long arms forcing them to throw it over the top. We wanted to see if we could execute it properly, and we were able to. When we didn’t get steals, (Southeastern) quick shot it at times. We were able to get it and get off to the races. I thought that allowed us to get a little break out there early on to where we were able to execute defensively and get easy scoring opportunities after getting steals.”

On what worked for LSU against Southeastern’s zone…
“We have to get the ball to the middle of the floor in the weak part of the zone, and make plays from there. That is the weak area of the zone. We have to continue to keep getting the ball there.”

On LSU’s full court press…
“That is something we work on everyday in practice. Coach (Johnny Jones) decided to run with it tonight for a little while. It worked, and we stayed with it.”

On Southeastern cutting the score to ten points in the second half…
“We just didn’t know where our guy was, and we allowed a lot of open threes to get by.”

On Southeastern cutting the score to ten points in the second half…
“We didn’t really take our foot off the gas. Teams are going to make shots. They made five in a row. We looked up at the score, and they were down by ten. They were punching, and we just had to respond.”

On LSU’s turnovers during the second half…
“It was on us. We made a couple bad reads. We have to make that open pass early instead of late. I believe I had a turnover or two, and that is something I have to get better at. We will get better at that as a team.”

Opening statement…
“I think we’ve got a team that if we can find a way to become self-starters, we have a chance to get better. We’re still a long way away and we’re inconsistent right now. But the team I saw in the second half is the team I was hoping to bring here from the beginning. Clearly, they are a team that can wear you down with their great size. But I’m very pleased with the second half performance. I was not pleased at all with the first half. I don’t know if it’s a confidence issue or if it’s playing together. We’re trying to do some things to try and simplify what we’re doing offensively so we can get into a flow. It may be personnel. There’s nothing better to help a player focus in on things and to work a little harder and focus a little harder than sitting on the bench. We have a lot of depth. In real simple terms, our turnovers went down, we started to shoot the ball and loosen up, we got looks and we took advantage of them, we started to be a little effective around the basket, and defensively we kind of got away from some of the, I wont say gimmicks, but we were trying to do some things like doubling to take away their great size and then other guys got into a great rhythm. And I hated that. So I said we’re going to go toe-to-toe, we’re going to guard the best we can, and that’s how we’re going to approach the second half. It was a formula that worked for us, and the guys at least responded like they did against Rice. We weren’t able to come all the way back and hang in there as the game went away, but it was a better showing. Much more respectable than the direction it was going in the first half.”