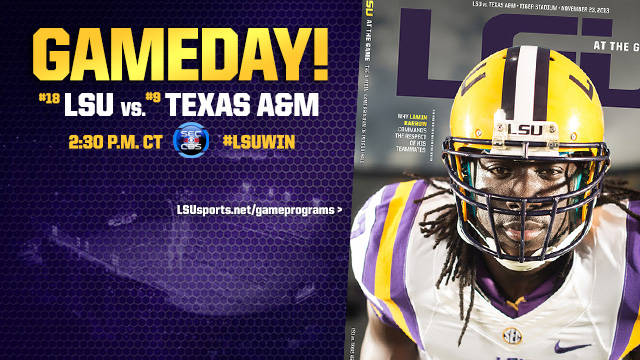 Saturday’s game between the Tigers and Aggies will mark the first between the teams in Tiger Stadium since 1994. Last year, LSU beat the Aggies, 24-19, in College Station in what was the first contest between the two schools as conference opponents. LSU leads the overall series 28-20-3.

Kickoff between the Tigers and the Aggies is set for 2:30 p.m. from a sold out Tiger Stadium. The game will be televised nationally on CBS with Verne Lundquist, Gary Danielson and Tracy Wolfson on the call. The contest will also be broadcast on the LSU Sports Radio Network and in the Geaux Zone on LSUsports.net with Jim Hawthorne, Doug Moreau and Gordy Rush calling the action.

LSU, which goes into the Texas A&M game having won seven straight and 29 of its last 30 contests in Tiger Stadium, hasn’t played at home in nearly a month. LSU’s last home game came against Furman when the Tigers beat the Paladins, 48-16, on Oct. 26.

“We’re looking forward to getting back into Tiger Stadium,” LSU coach Les Miles said this week. “This is a big game against a very talented Texas A&M team. They have a tremendous quarterback in Johnny Manziel, who I see as being bigger, faster, and stronger and a more complete quarterback than he was a year ago.”

Last year, the Tiger defense forced Manziel into the worst offensive output of his record-setting season, limiting the quarterback to just 27 rushing yards and forcing him to throw three interceptions. LSU remains the only team to hold Manziel without a rushing or passing touchdown in a game during his collegiate career.

This year, Manziel and the Aggies are leading the SEC in scoring with 49.2 points per game and total offense (578.0 yards) despite ranking last in the conference in time of possession with 27:26 minutes a contest. Manziel has thrown for 3,313 yards and 31 scores, while rushing for 611 yards and eight touchdowns.

”I think a year ago he was a runner,” Miles said of Manziel. “I think this year he’s a much more capable quarterback.  I think he steps back in there, understands what to expect, and seems to be stronger in the ability to throw it. I think they’re better (offensively).  I think conceptually they challenge you with spread, and they have a quality running back and a quarterback that can really throw it and receivers that can catch it.”

While the Tiger defense will have to play well against the Aggies, it may the LSU offense and its performance that could go a long way in determining the outcome of Saturday’s game. The Aggie defense is rated last in the SEC in total defense as they are allowing 454.4 yards (210.7 rushing, 243.7 passing) and they are 12th in the conference in scoring with 30.9 points a contest.

LSU will look to take advantage of A&M’s defense with a passing attack that has thrived under senior quarterback Zach Mettenberger, who ranks No. 2 in the SEC in pass efficiency (176.6 rating) and No. 3 in yards per game (273.3). In 10 games, Mettenberger has completed 167-of-254 passes for 2,733 yards and 20 touchdowns. Mettenberger is the only quarterback in LSU history to throw for 2,500 yards in back-to-back seasons.

The LSU running game is led by sophomore Jeremy Hill, who has rushed for 964 yards and 13 touchdowns. Last year, Hill enjoyed one of his best games as rookie, rushing for 127 yards and a TD in the LSU victory.

Beckham Jr. has helped give the Tiger defense a glimpse of what it may be like trying to defend Manziel on Saturday as he’s worked as the scout team quarterback in practices leading up to the game.

“I think speed of the game is tremendously important, and I think that’s something that we recognized in the first quarter at their place (last year),” Miles said. “ It took a very fast LSU team to get with the speed of the game.  The good thing is that we’ve worked with Odell [Beckham Jr.] and some guys who have real speed at that spot, so they’ll see guys that can move their feet very fast.”

“This is the kind of game that you come to LSU to play in,” Miles said. “You look forward to playing nationally ranked teams and the opportunity to play best in front of your friends and family in Tiger Stadium.”