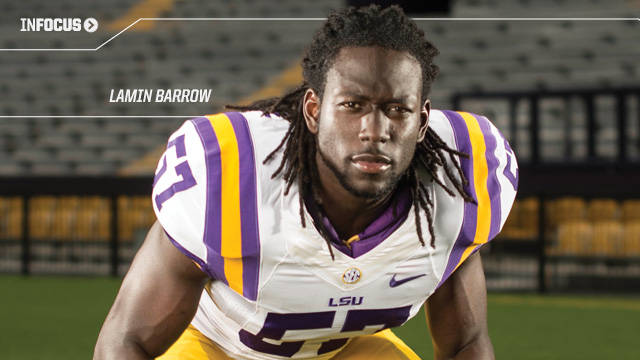 No. 18 is more than just a number on a jersey to the LSU football team. The jersey calls for success on and off the field with a selfless attitude. The tradition of No. 18 is 10 years old, seeing two national champions in Matt Mauck and Jacob Hester; the most productive tight end in school history in Richard Dickson; a great comeback player who battled two torn ACL injuries in Richard Murphy and two third-round draft picks in Brandon Taylor and Bennie Logan.

No. 18 found a new home this August in senior linebacker Lamin Barrow. The versatile Marrero, La., native found his way to football through an unlikely path, overcoming the challenge of diverting his social paths from his friends and embracing his artistic abilities.

Before coming to college, Barrow always loved to play football, but he never saw it as an opportunity to get an education and a once in a lifetime experience at the flagship school of Louisiana.

“I come from a situation where a lot of my friends were going in other directions and doing things that my parents didn’t want to see me get into, and they did a great job of raising me and getting me out there and playing football,” Barrow said. “I never thought I would get a scholarship to come to my favorite university and play football.”

Barrow was accepted into a gifted program in third grade for his excellent artistic ability, a skill that was triggered by a member of his family.

“My third grade teacher noticed that I was drawing some real in-depth drawings, so she thought I should apply for the gifted program,” Barrow said. “You had to go to the state board and take the test to see if you were gifted. I went to take the test, and they determined that I was [gifted]. Through middle school and high school, I was in an arts program where I would go two to three times a week and do things such as pottery and charcoal painting. I think one of the main factors with that was my older brother. He was a guy who kind of did the same thing, but he was better than me. He could draw you standing up anywhere on the spot. I think me wanting to be like him is what began my drawing.”

During his freshman year at LSU, the talent and depth at linebacker that Barrow witnessed was nothing short of spectacular.

“As a young guy, of course you want to be on that field more, but you have guys – coming into my freshman year – like Perry Riley, Kelvin Sheppard, Jacob Cutrera and Harry Coleman,” Barrow said. “Ryan Baker then emerged as a star on this defense, and I just kind of had to wait my turn. There was never a situation where I felt like I would give up.”

Barrow understood that he had to remain patient in order to rightfully earn a leadership and starting position on the football team. But in the offseason entering his sophomore year, a severe illness in Barrow’s family helped him grasp the concept of what fighting was about. This situation was more serious than football; this was Barrow’s three-year-old daughter, Laila, fighting for her life.

“My daughter is my world,” Barrow said. “There was a time where she was sick. I used to drive home to New Orleans every day after practice during the summer and sit in the hospital with her, and her mother did a great job doing everything she needed to do to take care of her while I was in Baton Rouge. Just to see her come out of that situation – there was a point where she was on life support. Being so strong at such a young age, she let me know that anything is possible.”

Through the process of seeing his daughter fight through a severe illness, Barrow’s decision to come to LSU was solidified by the support of his teammates and coaches.

“I think that’s when it turned around for me as far as for being at this university,” Barrow said. “Just bonding with my coaches – I can remember calling Chief [Defensive Coordinator John Chavis] the day she got sick. Even though he was out of town, at any moment he was ready to fly out to New Orleans and be there by my side. I just knew this coaching staff and this team were behind my back 100 percent. That little girl – she changed my life.”

The year following his daughter’s severe illness, Barrow got his chance to shine and came through for the Tigers in an impactful way, finishing second on the team in 2012 in total tackles.

In the offseason following his junior year, Barrow was rewarded with the true testament of a leader on the LSU football team – the No. 18 jersey.

Shortly after receiving the meritorious honor of the heralded jersey, Barrow expressed his gratitude to his teammates and coaches, and even his followers on Twitter.

After his senior season is complete and his LSU campaign comes to a close, Barrow will get a vote on who becomes the next No. 18, another tradition held in high standards at LSU. Until that day comes, the Butkus Award semifinalist will humbly accept his position as a leader, both on and off the field.