In Focus: You Are Not Alone 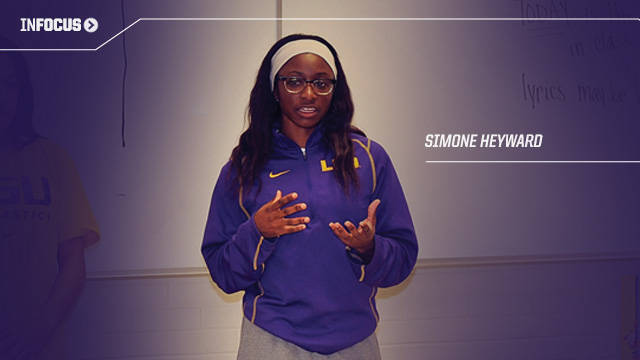 Friends, family, God and giving back to the community.  These are the things Simone Heyward focuses on as she faces the challenges of life.

As Heyward looked at colleges, LSU was not her first choice.  The California native’s childhood dream was to play softball at UCLA.  Then another school appeared interested, a school with Purple and Gold as its colors.  Former LSU softball head coach Yvette Girouard and former assistant coach James DeFeo began recruiting Heyward, who fell in love with the school.

“I went to a football game and saw that LSU supports academics and athletics almost equally.  They stress both of them,” Heyward said.  “That’s what really got me.”

Heyward’s athleticism is not unfamiliar to her male-dominant family.  Her cousin, Jason Heyward, is an outfielder for the Atlanta Braves.  The two Heywards have a healthy competition that has existed since childhood.

“It’s kind of a fight between us because he’s an outfielder too,” Heyward said.  “But it’s always positive.  When I saw that his arm was getting stronger, I had to go throw long tosses too.”

Heyward uses that competitive spirit to improve not only herself, but her teammates as well.  Although Heyward will pull teammates aside to give advice and share tips, she prefers to lead by example.

“I try to work hard during practices,” she said.  “When people see that, it can motivate them.  I don’t try to give my teammates a pep talk to get them going.  They see how I play, and they want to give the same effort.”

The senior starting outfielder for the Tigers has many memorable moments on the field.  With LSU trailing 1-0 to No. 9 national seed Missouri in the rubber game of the 2012 NCAA Columbia Super Regional, Heyward blasted a three-run double for her first extra-base hit of the season off Mizzou All-American Chelsea Thomas. The Tigers won 3-1 and punched their ticket to the Women’s College World Series.

But Heyward is more than just an athlete.  Last year, she started the You Are Not Alone (YANA) program. This program aims at talking to children about dealing with the loss of a loved one, a topic Heyward knows well after losing her mother, Mavis, the spring before she began school at LSU.

The idea for the YANA program came after many discussions with former LSU football player Sam Montgomery, who lost his brother in 2007.  Although Heyward leads by example on the field, she soon realized that sharing her story could change lives.

“We said we should start a program talking to kids because he loves talking to kids,” Heyward said.  “At first, I didn’t want to speak.  But at a YANA session, I ended up talking about my mother and saw the impact it had on the school.  There were kids that came up to us afterward and said that they were inspired.”

Like anyone dealing with the loss of a loved one, Heyward deals with challenges on a daily basis and still struggles with the death of her mother.

“I’m on a team where girls like to talk to their moms, and I don’t get that privilege,” Heyward said.  “That’s kind of been one of the hardest things.  I can’t just call her up and start talking.”

An active member of LSU’s Fellowship of Christian Athletes (FCA), Heyward says there are two things in her life that have helped her get through the difficult times.

“My relationship with God is always getting stronger, and my groups of friends have helped me and supported me in a lot of what I do,” Heyward stated.  “Those are the biggest things.”

The YANA project has taught Heyward that talking and asking for help is important in difficult situations.  During her freshman year, Heyward did not talk about her circumstances or her emotions, and she realizes that was a problem.

“I think it’s important to share with people, especially younger kids, about grief and loss and the fact that you can cry, you can show emotion and you will get through it eventually,” Heyward said. “You can open up and still be OK because you will eventually need someone near you to help you.  Without that, life gets a lot harder.”

Heyward wants to leave more than an impressive athletic resume’ when she graduates from LSU.  She wants to leave a legacy.  She is trying to spread the YANA program, not only to SEC schools, but also to other parts of the country.

“I’m really trying to see if we can keep that going,” Heyward said.  “It’s really up to different people if they want to visit.”

When on the field, many athletes look to the stands for familiar faces, but Heyward does not have that luxury.  Her family has never seen her play at Tiger Park, but there is a purple sign with a white ribbon on the berm that brings Heyward comfort.  The letters MH adorn the top of the ribbon, celebrating the memory of Mavis Heyward.

“One of the biggest things about the sign is that it’s on the berm,” Heyward said.  “Without a doubt, I know that’s where my mom would be sitting during the game.  She would not be in the stands.  I know that I can look back and that sign is always going to be there.”

For Heyward, telling her story becomes easier each time it is shared, and she is happy to see people’s reactions as they start to understand her experience.

“It’s rewarding to me to know that my mom’s loss wasn’t for nothing,” Heyward said.  “I’m using it for a positive reason, and just to see the impact that it has on kids is awesome.”