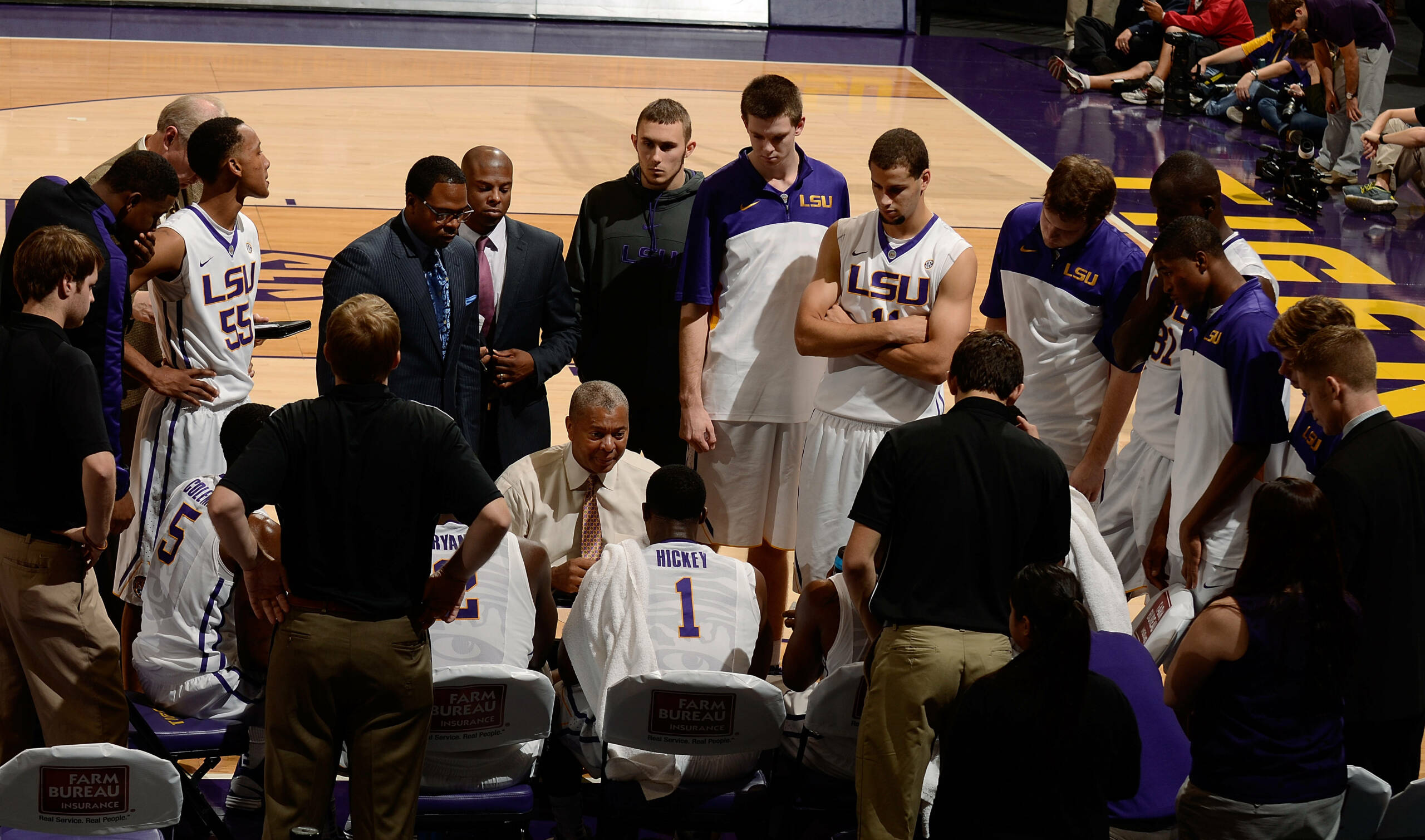 BATON ROUGE – LSU’s first homestand of the young 2013-14 college basketball season comes to an end Friday night at the Pete Maravich Assembly Center as the 2-1 Tigers host the 2-1 Lions of Southeastern Louisiana University.

The game will be broadcast on the affiliates of the LSU Sports Radio Network (Eagle 98.1 FM in Baton Rouge) and in the Geaux Zone at LSUSports.net. There is no television broadcast, the final game of the regular season that will not be broadcast either regionally or nationally. Tickets for the game are available at LSUsports.net and beginning at 5:30 p.m. at the ticket windows on the upper concourse of the Maravich Center.

The first 1,500 fans will receive LSU Men’s Basketball Tumblers and there will be $5 tickets for sale at the Maravich Center box office for those fans that bring either a donation to the Baton Rouge Area Food Bank or show their tickets for Saturday’s LSU-Texas A&M football game. This will also be a Student Priority Point game and all LSU Students are admitted free of charge to all LSU Basketball Games.

In the final tune up before the team travels to Florida for the Old Spice Classic over Thanksgiving, Coach Johnny Jones will be looking for a more rounded effort than the Tigers gave against UNO on Tuesday night in an 81-54 win. Although the final margin of victory was good, it took the Tigers nearly 30 minutes to separate themselves from the Privateers after a very sluggish start that saw LSU up just four at the half.

Jordan Mickey made it three straight double doubles as he had 16 points and 11 rebounds, while Andre Stringer led the team with 19 points. Shavon Coleman off the bench added 14 points and Johnny O’Bryant III had his third straight game with double figure boards with 11 (7 offense).

It is expected that if all goes well at practice Thursday and walk through on Friday that LSU freshman Jarell Martin will return to action in some form on Friday night. Martin, a prep All-American, played just 33 seconds in the Nov. 12 game at UMass before having to leave the game with a sprained right ankle.

Southeastern is coming off a 108-54 win over Champion Baptist on Nov. 14, two nights after a 63-62 road win at Rice. The Lions lost, 89-53, in their opener at Missouri. JaMichael Hawkins leads the Lions in scoring at 18.3 points per game, while center Devonte Upson comes in averaging 10.0 points a contest.

Coach Johnny Jones met with the media on Thursday prior to Friday’s game and here are some of his comments:

Opening Statement…
“We look forward to getting back out on the floor tomorrow night against Southeastern. We look forward to improvement since our last outing in some areas that we certainly had to work on and get better. Southeastern will present some challenges to us because they’ve got guys that are very capable on the perimeter of making plays off the dribble. They are a good shooting basketball. They got a good win at Rice, and we have to make sure we come out at the beginning of that game and try to establish ourselves early on; making sure that we hit on all the cylinders that we need to. We’re looking forward to our preparation prior to leaving next week for games in the Thanksgiving Classic in Orlando. We’re hopeful that Jarell [Martin] will be available for us and give us some positive minutes on Friday. We look forward to him working out with us today. He worked out with us yesterday. Hopefully, he’ll continue to work out with us today and be available on Friday for us. Malik Morgan will probably be out tomorrow from an injury that he sustained in the UNO game. He will probably not be available for us at that time. We’re also excited for Johnny [O’Bryant III] being named to the 50 Naismith players to watch. I think that’s really important. The time and energy that he’s put in to be put on a list like that means a great deal, and he’s done a tremendous job of representing our program and our university in the right way. It’s great to see guys recognized for those types of things and the effort that he’s put on the floor as well.”

On Shavon Coleman‘s impact coming off the bench…
“I think Shavon is just one of those guys – he’s a basketball player, and regardless of the role that you put him in, you’re going to get great effort from him. He’s shown us that time and time again. Last year, he started for us in some instances, and I think he led our team during our preseason non-conference games around about 17 points a game and played extremely hard. He played the point of our press and then we put him on the bench. He came in and gave us some positive energy and minutes as well. He’s one of those guys – he’s very mature – he doesn’t get caught up in starting or not starting. He gets caught up into the game, and he’s focused coming in. It’s great to have guys like that because he’s certainly an impact player for us. He’s really unselfish and just comes in and plays the game.”

On Jarell’s status Friday affecting the rotation next week for the Old Spice Classic…
“He’ll play tomorrow provided things go smoothly today. He was able to practice yesterday. So we’re looking forward to him being back [and] a part of what we’re doing tomorrow. We just want to make sure that he’s able to do it at the pace as well, and we just have to be mindful that his condition probably won’t be at the same level that it was at the beginning of the season when he went down 10 seconds into the game versus UMass. It’s going to be a little bit different for him, and we haven’t had the opportunity to see him in this type of action yet. So, it’ll be interesting for him as well as for us. Hopefully he’ll go hard early on, and we’re able to get him out, rest him [and] see how he feels. Then get him back in again and just play him in some spurts. Hopefully he can give us some positive minutes during that time.”

On what he hopes Jarell can contribute…
“Jarell is such a multi-dimensional player. I would say he’s capable of creating opportunities for other people; he’s a really good passer, a good rebounder, very capable of slashing to the basket and scoring. If you’re just playing inside, he has mid-range game, and he’s capable of knocking down the three. I’m not sure which of those we’ll have an opportunity to see tomorrow and at what rate because he really hadn’t been practicing with us. The speed of the game may have an opportunity to affect him a little bit. I’m hoping he’s hitting on all cylinders, and he’ll give us an opportunity to see those things by him putting the ball on the floor and making passes. He’s a good passer from the perimeter, and I think our post guys are really going to have an opportunity to benefit from him being on the floor because of his ability to get the ball inside. … I’m hopeful [his biggest impact] comes from rebounding. That he can help us inside – although we’re rebounding the ball well, I think that’s going to help us. I think at the same time the matchups that we generally get from the three [forward] spot because of Jarell’s size. Going up against whoever is guarding him, can we take advantage of him and maybe post him at times. I think we can have an opportunity to look at different sets while he’s in the game.”

On Shavon’s perimeter shooting this season…
“I thought he was a little hesitant on a couple of shots. I thought he was looking for Stringer to get open. I don’t know if it was last game or the game before, but Shavon is a very capable shooter. I just think this early part of the season helps us because we’re looking for that balance. Those guys are going to be open on the perimeter because of the impact that Johnny has inside and Jordan Mickey. They’re going to be open. We just have to make sure that we’re conscious that we’re not always taking the first available shot. We need to look inside and get that high-percentage shot when we can and take advantage of those opportunities because they don’t come around a lot in games. People are not going to leave Johnny open, and they are not going to leave Mickey open. If those guys are open, we need to get it to them, and that’s why you see so many perimeter shots because they’re honoring the toughness of our guys inside and giving us looks from outside.”

On Anthony Hickey helping Tim Quarterman‘s progression…
“Hickey is so good and talented. I think his ability on the floor and his maturity on the basketball court – it shows out there, and he’s certainly a very confident basketball player. I think you can possibly see the confidence of our guys when he’s on the floor as well. He’s really good in terms of helping along with Tim Quarterman as well. He’s trying to make sure that he stays encouraged and keep him going. They actually had an opportunity to be on the floor together for a short span the other night due to injury, and that was one of the first times we had an opportunity to look at that lineup. We moved Hickey over to the two [guard] momentarily while they were in the game together. Hickey is special. He’s really, really good and talented, and I think he’s shown that over the years in the way that he loves to compete on the floor. I think Tim has the ability and is talented. But at the same time, he’s a freshman [and] these things are new to him. He still has a learning curve that he will certainly have to go through.”

On starting stronger in the first half…
“I think unfortunately we are not like the NBA where they have so many exhibition games prior to the season starting. They can work out all the kinks and play a lot of combinations where we have to certainly do ours in game situations. The way that we’ve played early on, we’ve been able to because of some scores – get some guys in and look at some combinations we would like to experiment with. That has helped us, and I think that is one of the things your preseason prior to your conference play helps to have a couple of home games and have a couple of opponents where you can look at some combinations to prepare yourself for conference play.”

On Jarell’s injury stunting his progression…
“It’s college basketball, it’s Division I. It’s different than high school and the speed of the game and all of those things will come into play. It’s something that he will certainly have to adjust to. As talented as he is, it’s an adjustment that he will have to make. That setback 10 seconds into the game, I thought we were about to see some highlights. Unfortunately, there’s an injury, and now he’s back to square one in terms of playing in Division I basketball. We know that he’s capable, but I certainly don’t think it helps coming off of an injury because you don’t know how much that is going to play into him being about to go 100 percent. Is he at 80-85 percent out there trying to play at that level, and his condition will take a hit as well because he hadn’t been able to condition the way that he’d like to.”