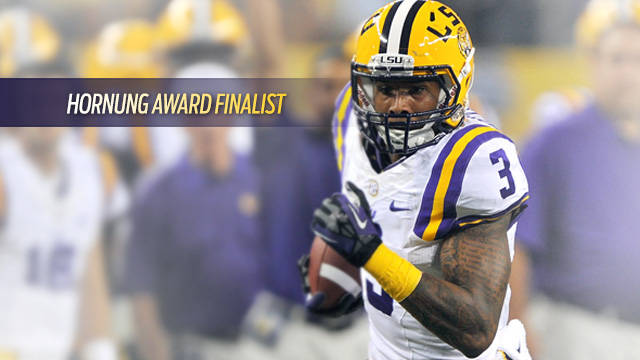 LOUISVILLE, Ky. – LSU junior wide receiver and return specialist Odell Beckham Jr. has been named one of five finalists for the Paul Hornung Award that is presented annually to the nation’s most versatile player, the Louisville Sports Commission announced Thursday.

One of the most dynamic players in college football, Beckham Jr. leads the Southeastern Conference and ranks second nationally in all-purpose yards with an average of 209.0 per game.

Beckham has accounted for 2,090 all-purpose yards this season, including a 100-yard missed field goal returned for a touchdown against UAB on Sept. 7.

Beckham is up to fourth place in all-purpose yards in LSU single-season history, and he is only 31 yards shy of breaking the school record of 2,120 yards set by Domanick Davis in 2002.

Beckham is also closing in on the SEC single-season record of 2,396 all-purpose yards held by Randall Cobb of Kentucky (2010), and he needs 307 yards to shatter the mark.

Fans can vote for Beckham Jr. online at www.votepaulhornung.com.

The winner will be announced Dec. 13, and the winner and his family will be honored Jan. 28 at the annual Paul Hornung Award banquet presented by KentuckyOne Health at the Galt House Hotel in downtown Louisville.

The announcement for the fourth Paul Hornung Award was made by the Louisville Sports Commission and football legend Paul Hornung, a Heisman Trophy-winning quarterback at Notre Dame and an NFL Most Valuable Player with the Green Bay Packers whose versatility earned his enshrinement in both the college and professional football Halls of Fame.