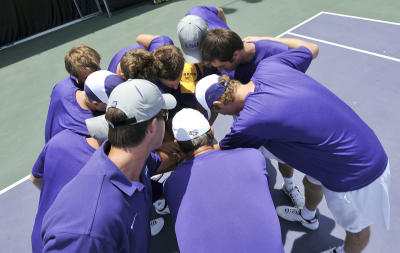 “We added two great athletes that are excited to come to LSU and develop to their full potential,” Brown said. “Will Adkisson has one of the bigger serves coming out of juniors and has excellent doubles results. Simon Freund is a natural talent who uses his athleticism and instincts to win at a high percentage rate. He is currently No. 164 in the world junior rankings with another year to compete.”

Adkisson attended the Brookhaven Tennis Academy in Dallas, Texas, and he reached the doubles semifinals at the USTA Spring National Championships earlier this year in March. He currently has an overall record of 34-28.

Freund is from Stockholm, Sweden, and still has another full year before coming to LSU. He currently sports a 29-10 record this year for singles and has notched a 19-8 doubles record.

Their athletic achievements are not the only thing that makes them stand out. According to Brown, “They both are high achievers in the classroom to go along with their athletic potential.”

The Tigers will be back in action at the Key Biscayne Collegiate Invitational from Jan. 5-7 at the Tennis Center at Crandon Park in Key Biscayne, Fla.

LSU is set to kick off the 2014 dual-match season on Jan. 19 in Houston, Texas, against Rice at noon CT at the George R. Brown Tennis Complex.