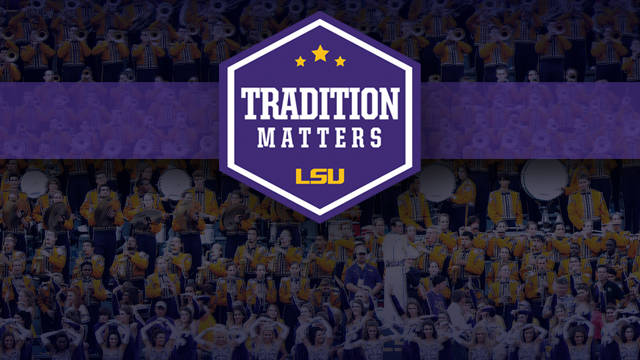 BATON ROUGE – LSU has launched the “Tradition Matters” campaign in an attempt to bring back some of the fan favorite songs that traditionally have been played by the Golden Band From TigerLand at football games in Tiger Stadium.

In recent years, songs such as “Neck” and “Tiger Rag” have been shelved by the band due to distasteful lyrics chanted in chorus with the band.

Starting Saturday, LSU officials, along with the football team and coaching staff, are asking the student section to refrain from using profanity and distasteful lyrics when these songs are played.

“Our student section and the atmosphere they create make Tiger Stadium the best place for a college football game and gives us a tremendous home field advantage,” LSU vice chancellor and director of athletics Joe Alleva said. “We need our students to be loud when the Aggies have the football but to also keep it clean when cheering for the Tigers.

“We want the band to be able to play all of their songs and in order to do so we need a commitment from our students to refrain from using profanity and distasteful lyrics when the band plays.”

Some of the ways that LSU is bringing awareness to the campaign include a video from wide receivers Jarvis Landry and Odell Beckham Jr. showing their support of the initiative; 5,000 stickers and 10,000 “Tradition Matters” flyers that will be distributed at the student gates on Saturday; and 150 mini-posters that will be displayed in and around Tiger Stadium.

The video from Landry and Beckham Jr. can be seen on LSUsports.net as well as LSU’s social media platforms on Facebook (facebook.com/LSUfootball) and Twitter (@LSUfball) beginning Thursday. The video will also be shown pre-game on Saturday afternoon in Tiger Stadium.

“We have tremendous fans and their support has been outstanding,” Alleva said. “These last two games are very important for our program. We need to pack Tiger Stadium for these next two games and give our seniors a sendoff that they deserve.”

Kickoff on Saturday between the 18th-ranked Tigers and the ninth-ranked Aggies is set for 2:30 p.m. CST in Tiger Stadium.