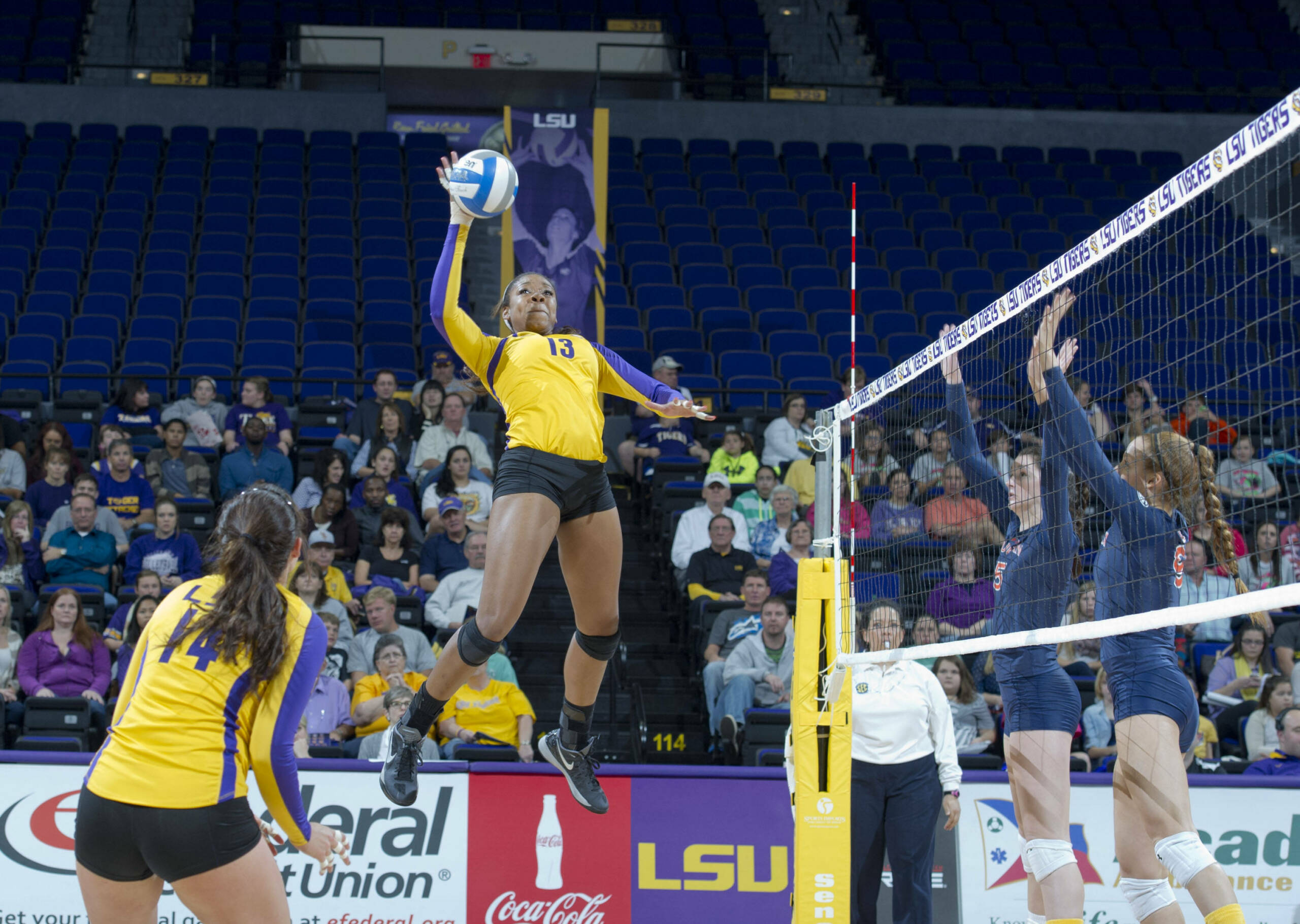 Nominee for SEC Defensive Player & Freshman of the Week

Briana Holman, MB, 6-1, Fr., DeSoto, Texas
Briana Holman continued her dominance as the SEC’s top blocker and racked up 2.08 stuffs per set during LSU’s three matches last week. She amassed 10-plus blocks on two occasions which enabled her to notch her third and fourth double-doubles of the season. Holman equaled her career-high 14 blocks against Tennessee. Previous to Holman this season, the last LSU player to notch 14 blocks in a match was former All-American Ivana Kuzmic in 2004. The 27 total blocks for Holman over the week vaulted her to LSU’s single season mark for a freshman breaking then SEC Freshman of the Year Julie Stempel (1988).

Notes on the Tigers
LSU ended its stretch of five matches over a 10-day span with a five-set victory over Tennessee after the Tigers started the week with setbacks to Texas A&M and Auburn. The last three victories for LSU have come in five sets, and the Tigers have won eight of their 12 five-set decisions this season. LSU’s eight five-set victories are second-most for a single season in program history only behind the 2007 squad who turned in a 9-3 mark. The Tigers sit at 16-10, 6-8 in SEC play and are rated No. 34 in the latest edition of the RPI. Briana Holman posted 2.62 kills and 2.08 blocks per set last week. She secured two double-doubles and matched her career-high with 14 stuffs versus Tennessee. For the season, Holman has 169 total blocks which is a new record for a freshman in a single season. The previous mark was held by Julie Stempel, the 1988 SEC Freshman of the Year. Holman’s 1.58 blocks per set average not only pace the SEC but are fifth nationally, second among freshmen. Malorie Pardo garnered a balanced 10.15 assists, 3.15 digs and 0.70 blocks per set last week. She has collected a double-double in seven of her last eight outings en route to a SEC-leading 17 double dips on the season. Pardo nearly compiled her first career triple-double with 50 assists, 20 digs and a career-best eight blocks during the Auburn match. Emily Ehrle was inserted into the starting lineup and responded with a career-high 18 kills on a .341 hitting percentage to spark the Tigers during their five-set win over Tennessee. Her previous career-high was 10 kills set during the season opener versus Texas-San Antonio. Cati Leak registered 2.77 kills, 2.69 digs and 0.92 blocks per set over her six rotations last week. She has powered home 10-plus kills in eight of her last 13 outings highlighted by 17 spikes at Tennessee, an SEC season’s best for Leak. Helen Boyle tacked on 2.50 kills and 3.30 digs per set last week. She has chipped in double-doubles in three of her last five outings. With her 20 kills last week, Desiree Elliott moved past Tess Sulatycki [1989-92] for 14th place on LSU’s all-time list. She has ripped 1,141 career kills which is fifth among SEC active players. Katie Lindelow reeled in 4.64 digs per set sparked by a career-high 32-scoop effort against Auburn. The 32 digs also were tied for ninth-most in program history for a single match. Haley Smith continues to handle LSU’s libero duties and corralled 4.23 digs per set last week. She sprawled out for a career-high 26 digs during the Tennessee match, her sixth career outing of 20-plus scoops. Smith has tallied 10-plus digs in 21 of her 22 starts at libero. After missing a five-match stretch, Laura Whalen provided 11 digs and two aces against Tennessee. LSU continues a run of six of eight matches on the road as the Tigers square off with No. 7 Florida [Friday – 6 p.m. CT] and South Carolina [Sunday – 12:30 p.m. CT] over the weekend. The Florida match will be televised by SUN Sports and carried by FSN regionally.