What They're Saying About Joe Dean 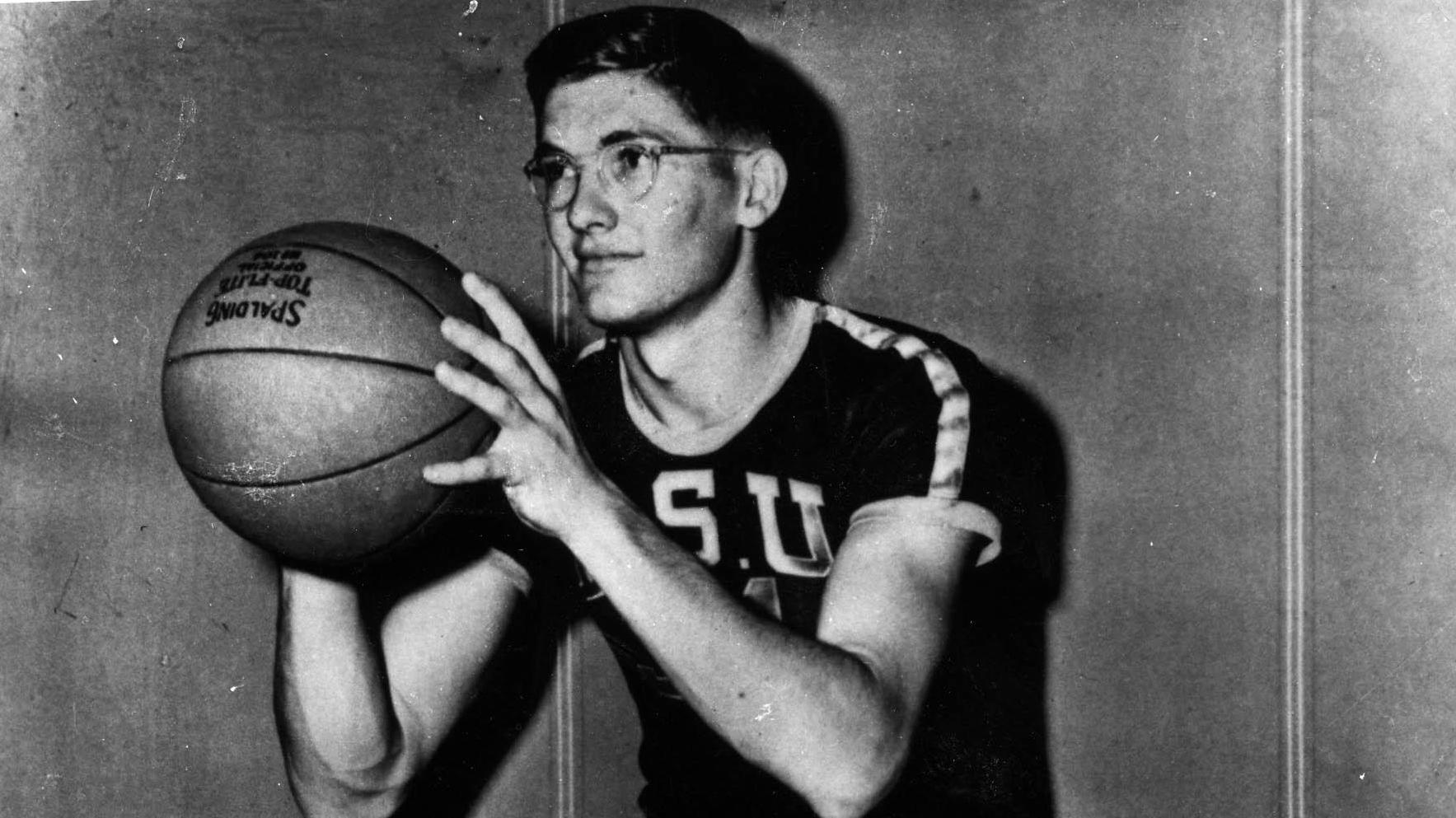 Visitation will be held from 6-8 p.m. on Tuesday at Rabenhorst Funeral Home (825 Government St. in Baton Rouge) and from 10-11 a.m. on Wednesday prior to the funeral service at 11 a.m. at First United Methodist Church (930 North Blvd.). Burial will follow the service at Resthaven Gardens of Memory (11817 Jefferson Hwy.).

The family requests that, in lieu of flowers or gifts, donations be made to First United Methodist Church.

What They’re Saying About Joe Dean:

The dean of college basketball in the South
by Matthew Harris, The Advocate

Joe Dean was sold on LSU
by Ross Dellenger, The Advocate

Joe Dean Sr.’s death hits home for a man who saw him as a second father figure
by Ron Higgins, The Times-Picayune

“Joe loved LSU and the impact that he had during his career as athletic director is a big reason why LSU sits in the position that it’s in today. From a basketball standpoint, he was a pioneer and a visionary, and he was constantly promoting the game. As an athletic director, he was a great businessman who had the ability to hire great coaches and gave them everything they needed to win and graduate their student-athletes. Personally, Joe was always great to me. He was always very supportive and willing to assist in any way. Joe Dean is a true LSU legend and I will miss seeing him in his usual seats just behind the LSU bench during basketball season.”
– LSU Vice Chancellor and Director of Athletics Joe Alleva on Joe Dean

“The summation of anyone’s life is a most difficult task. Now I hope I do justice to a man I loved very much, Joe Dean.

“He was a man filled with energy, ideas, business ethics, motivation, candor, a tireless spirit and a deep quest to live life fully. His love of LSU was immense and he was so proud to be its Athletics Director. Behind his gruff voice, and impatience there was a very sensitive man that reached out and helped so many young coaches fulfill their dreams. I personally am eternally grateful to him for giving my name to LSU Athletics Director Carl Maddox as a possible candidate for the LSU Basketball position and for standing by my side during the highs and lows.

“James Naismith invented the game, but Joe promoted this game better than anyone in the history of the SEC and was highly respected by tons of people in the world of sports.  Now, ‘Mr. String Music’ is gone, but anyone that knew him intimately will never forget his spirit and tenacity.”
– former LSU Men’s Basketball Coach Dale Brown

“My sympathies and condolences go out to the Dean family. Joe Dean – the impact that he’s made on not only LSU, but college basketball in general – I’m very happy that I had an opportunity to spend a lot of time with him during my time here as an assistant. Over the years even when I left here, I had an opportunity to engage in conversations and just learn more about the impact that he had. I would pick his brain quite often. He will certainly be missed in the college basketball profession. But at the same time, the footprint that he left behind will live on forever.”
– LSU Basketball head coach Johnny Jones while meeting with the media Monday

“Recognizing the fact that Joe Dean has passed, former AD, visionary, if you will.  I think the path that we’re on here in the athletic department is based on certainly in part his vision and what he saw a major college athletics department consists of. I can tell you that everybody knows his famous line when calling basketball games:  String music.  We want to say thanks and remember him.”
– LSU Football head coach Les Miles at Monday’s press conference

“The years I spent with Joe were magical. Broadcasting the games was special, but traveling the back roads of the South together created lasting memories. Joe would share stories from his colorful past in the way that only he could spin a yarn and our discussions would eventually wind up on two of our shared passions: basketball and Thoroughbred racing. We bonded into great friends. From his playing days, to his Converse years, broadcasting and athletic administration, he was one of the legendary characters in Southeastern Conference history. I’ll miss him….and it won’t be the same without seeing him in his spot at the Kentucky Derby every year.”
–  longtime broadcast partner Tom Hammond

“There are people that you meet in your life that have a profound effect on the direction that you take in your own life. Joe Dean was one of those individuals that sent me on a path that I never would have experienced. He had the ability to influence others in a positive way and to provide help when those less fortunate needed a helping hand. He loved life and lived it to its fullest.”
– Larry Conley, who worked with Dean on SEC broadcasts and succeeded him as lead SEC analyst when Joe became LSU’s AD

“Joe Dean’s influence on the SEC has been profound on many levels because of his involvement as a student-athlete, alumnus, athletic director and broadcaster. His signature ‘String Music’ is synonymous with SEC basketball and he has been a fixture at our basketball tournament for many years. His presence will be missed, but his impact will live on for many of us in the SEC for years to come.”
– SEC Commissioner Mike Slive

“The popularity of SEC basketball exploded in the early-80s due to many factors. Coaches like Dale Brown, Wimp Sanderson, Hugh Durham, Sonny Smith and Norm Sloan tirelessly promoted the game and were blessed with unique personalities that the fans loved and, sometimes, opponents hated. The league’s schools started putting money into the sport, building new facilities and arenas second to none. An equal factor in the growth of SEC basketball was television, and, by extension, SEC basketball television’s main face, Joe Dean. Beginning with the 1983-84 season, SEC basketball went from having 1-2 telecasts per week to 4-5 per week. I was lucky enough to be the executive producer of the regional SEC basketball television package during this time and saw firsthand the impact Joe had on our product. He was much more than the primary color analyst on the package. He was a showman, an entertainer, who promoted the league endlessly, both on the air and off. Fans gravitated to him and his signature phrase, “String Music” — radio stations had Joe Dean sound alike contests. An era ended in 1987 when Joe gave up TV to become athletics director at LSU. Joe has been a mentor and professional father figure to me for 30 years. I will miss him greatly.”
– Jimmy Rayburn, Chief Operating Officer for Raycom Sports, broadcaster of SEC basketball packages

“It’s rare that you have one person in your life who was a boss, mentor and close friend. That’s what Joe Dean was to me. He always had time for me regardless of the situation. He was truly a great man whom I loved very much. I’m sure I join many people when I say he will be greatly missed.”
– Former LSU Football coach Gerry DiNardo

“I can’t think of anyone that impacted intercollegiate sports on more platforms than Joe Dean. A great player, teacher, entrepreneur, broadcaster, and administrator. He taught me that the business of sports was more than just understanding the game. Joe inspired many in the business world, as well as sports broadcasting. The greatest ambassador for college basketball the SEC ever had. God Bless Mr. Dean and his family. It was an honor working with his son Joe on SEC Basketball simply because I knew his Dad would be watching. Joe Jr., will keep the memory of his father alive for many years to come. Sounds like, walks like and lives as his father did. Proud to say I was touched early on in my career by advice given from one of the all-time greats, Joe Dean Sr.”
– Tim Brando, CBS Sports

RIP TO A LSU LEGEND JOE DEAN BE SURE AND GIVE MY FATHER PHILIP A HARRISON A HUG. BOTH OF U WERE A GREAT IMPACT ON ME THANK YOU

Our condolences to the family of Joe Dean (Class of 2012) & the @LSUsports family. Great contributor at all levels. pic.twitter.com/dxxrplkOE4

LA & the sports world lost a legend in Joe Dean. He was an inspiration to many young bballers & gave us the iconic phrase “string music”.

Prayers & thoughts for the dean family in the passing of joe dean the legendary former lsu AD. A great man that helped & influenced many.