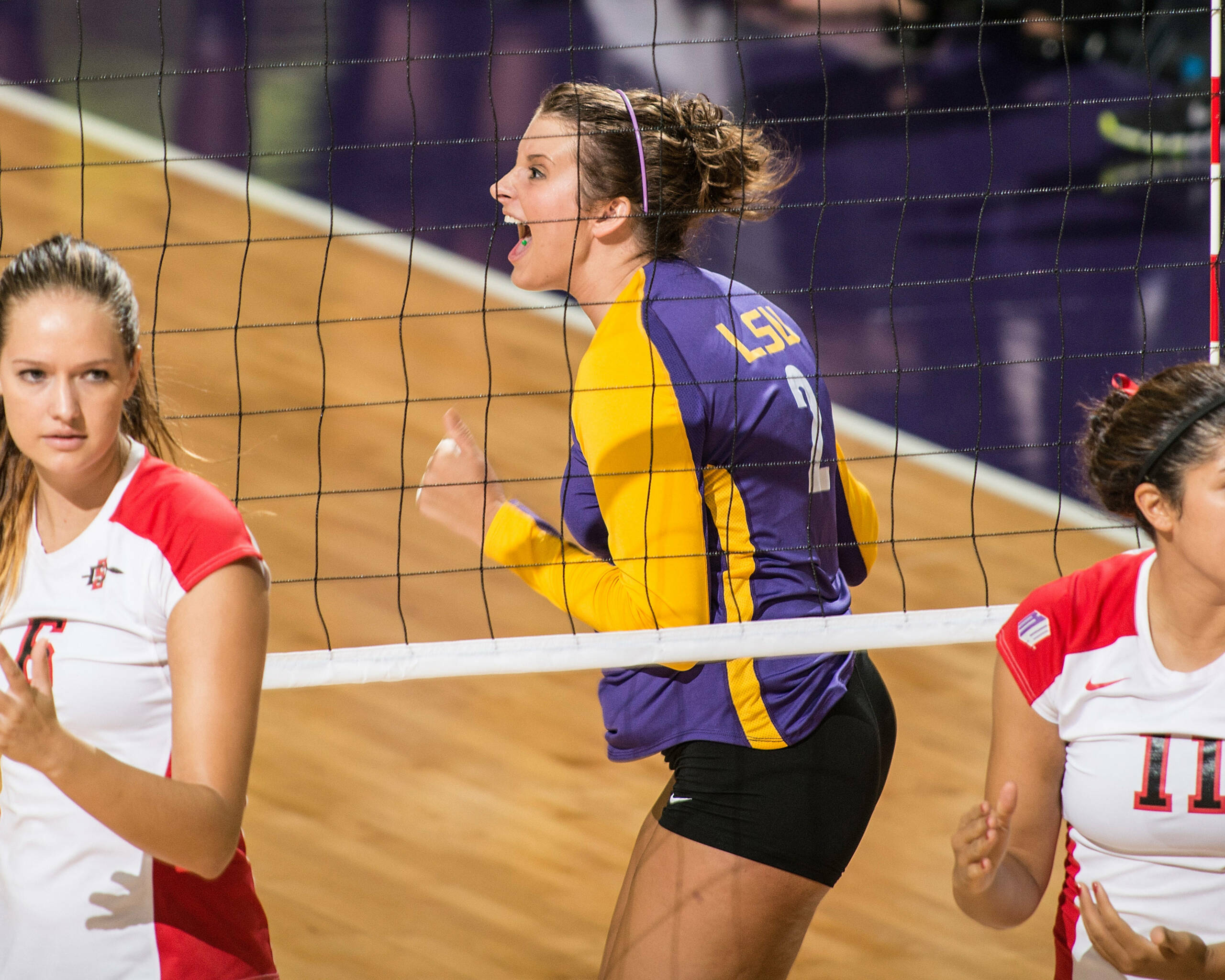 In the process, LSU (16-10, 6-8 SEC) put a season’s long three-match losing streak in the rearview mirror and earned its eighth five-set victory of the season. The eight five-set wins are the second-most in program history for a single season only behind nine wins by the 2007 team. The Tigers also ended a four-match skid to Tennessee (9-19, 1-13 SEC) which dated back to the 2011 season.

Ehrle, a sophomore transfer from Texas Tech, got her 18 kills on an efficient 41 swings with only four errors. Her previous season-high was 10 kills during LSU’s opener versus Texas-San Antonio on Aug. 30.

“Emily did a phenomenal job and certainly is the MVP of today’s match,” head coach Fran Flory said. “I thought Malorie was able to find a great rhythm with her and found the right tempo for Emily to be successful. Emily also did a great job of seizing the opportunity. She added beyond the number of kills she provided with her mentality and trust with the fact that we were going to win the match.”

LSU’s offense grinded out 56 kills and overcame 33 hitting miscues en route to a .117 hitting clip compared to 53 kills and .110 hitting ratio for the Lady Vols.

Malorie Pardo handed out 47 assists to go along with 15 digs to give the junior setter her seventh double-double in her last eight outings since Oct. 25.

A key for the Tigers was an 18-11 blocking edge. Briana Holman equaled her career-best and was involved in 14 stuffs. The 14 blocks also enabled Holman to move past Julie Stempel (1988) and set a new program single-season mark for a freshman. The Texas native popped 10 kills for her fourth double dip of the season.

LSU’s back row was sparked by Haley’s Smith career-high 26 digs. It marked the sixth time in her career that Smith has collected 20-plus digs. She also converted on 20 of her 21 reception attempts. Lauren Whalen tacked on 11 digs, two aces and was flawless on her 22 receptions en route to her fourth perfect passer mark of the season.

“Laura served extremely tough,” Flory said. “Aces are one thing, but she was able to able to get Tennessee out of system with her serve and create blocking opportunities for us. You have to credit our serving and our back row defense in our blocking stats. Haley had a strong effort. She did a great job of responding to what was in front of her and fought through plays by making key touches when we needed them most.”

Tennessee was led by Jamie Lea’s 16 kills and five blocks. She had to work for her 16 spikes coupled with 13 hitting errors on 51 swings and was bottled up for a .059 attacking percentage. Whitney Heeres and Ashley Mariana came away with 13 kills each. The Lady Vols also received a double-double from Lexi Dempsey (43 assists, 15 digs) whereas Ellen Mullins sprawled out for a match-leading 27 digs.

Trailing two sets to one and down 10-9 in the fourth set, LSU ripped off six straight points aided by two Leak kills, an Ehrle kill and a Holman solo block to go up 15-10. The Lady Vols trimmed the margin down to 16-14 before Leak slapped back-to-back kills to push the Tigers back ahead by four points. Tennessee used another fully and pulled back to 21-20 capped by a Lea kill. The Tigers answered the bell with the final four points of the frame highlighted by an Ehrle sideout spike and a Holman-Mahaffey block to tuck away the 25-20 victory.

The two teams shared the first 18 points of set five after both teams wiped away multiple two-point deficits early in the frame. LSU took an 11-9 edge after a Dempsey double contact and a Holman-Pardo double stuff. The Lady Vols crept back to within a single point at 11-10, 13-12 and 14-13. However, the Tigers worked their way to the 15-13 triumph behind two Ehrle kills, and a Leak kill which ended a long rally to provide the match-clincher.

“I challenged Emily when we changed sides during the fifth set,” Flory said. “I told her the next time she went back into the match, you have to make Malorie set you the ball. You have to let her know that you want it, and you are going to be the one that is going to come through for the team. We haven’t had many players step into those shoes this season. I’m proud of Emily for stepping up and claiming her opportunity.”

“At first, I was just trying to work my way into the match,” Ehrle said. “Luckily, I was able to rely on a variety of shots to keep their defense off-balanced. Even though I made an error during a crucial time in the fifth set, I knew that I needed to regroup right away to help our team win the match. I told Malorie that I wanted the next ball. Going in, I had the confidence that I was going to put the ball away and wasn’t going to let anyone stop me.”

LSU was unable to find its offensive rhythm during the opening set. The Tigers were limited to six kills and forced into a negative hitting percentage. Tennessee led wire-to-wire and ran off 12 of the final 16 points to claim a 25-13 decision. Lea and Mariani combined for nine of UT’s 15 kills in the frame, while Mullins sprawled out for 13 digs.

“We came out shaky, and I thought we were all trying a little too hard to the start of the match,” Smith said. “We came out with a purpose, and we came out with effort. However, effort and execution are two different things. The execution wasn’t there in the first set. I think we all noticed that, and I’m happy that we were able to come together.”

LSU regrouped in the early stages of set two and three Holman-Mahaffey blocks ignited the Tigers to a 5-2 advantage. The Lady Vols got as close as 10-9, but Ehrle slapped two kills teamed with a Holman-Pardo stuff to place LSU up 14-10. Ahead 17-15, Fears delivered the knockout punch with two kills and two solo blocks as LSU notched eight of the last 11 points to pick up a 25-18 win and even the match at a set apiece.

The third set featured 10 ties and six lead changes. LSU fired out to an 8-3 lead, but Tennessee responded with 12 of the next 16 points to turn the tables in its favor at 15-12. The Tigers used two Holman kills and Fears block to knot the ledger at 15-15. All square at 22-22, the Lady Vols arrived at set point after two straight Lea kills. LSU countered with two blocks involving Holman to deadlock the score at 24-24. However, Tennessee had the final answer and forced the Tigers into consecutive hitting errors to complete the 26-24 victory.

“We have to be ready for the next match and can’t look forward to December when the NCAA’s start,” Ehrle said. “This is going to be a big week of practice for us. I think every day we need to continue to work on different things and key in on those few points we really need to focus in on.”

LSU travels to take on No. 5 Florida, the fifth ranked opponent the Tigers will face during the 2013 season. Friday’s first serve is scheduled for 6 p.m. CT with live audio and live stats available for free inside the Geaux Zone at www.LSUsports.net/live.