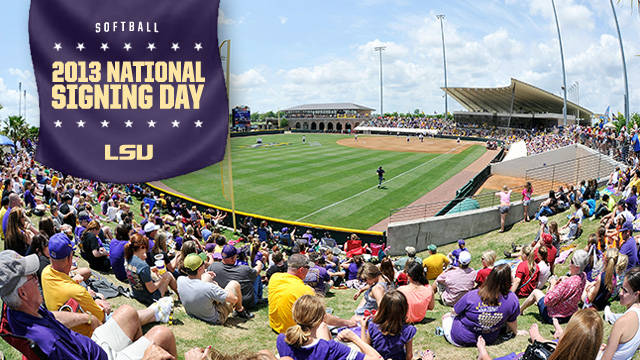 BATON ROUGE – The LSU softball program and head coach Beth Torina has announced the signing of Sydney Bourg, Emily Griggs, Taylor Lockwood and Allison Walljasper to National Letter of Intent to continue their softball career with the Tigers.

The quartet represents the states of California, Kansas and Louisiana. All four players will enter the program as freshmen for the 2015 season.

“We are very excited about the level of talent that Sydney, Emily, Taylor and Allison will bring to the LSU softball program,” Torina said. “This class brings a lot of speed and athleticism to our team as well as a standout pitcher that will make an immediate impact in the SEC. I’m confident that these four players will continue to build the great tradition of LSU softball.”

Bourg [Slidell, La.] is an infielder from Northshore High School in Louisiana. She has secured a pair of All-District selections and an All-Metro pick during her prep career, while her team has tied for two district championships. She batted .649 with 14 triples, 12 doubles and three homers as a junior after missing her sophomore season due to injury.

Bourg plays travel ball for the Louisiana Patriots. She connected for the game-winning grand slam in extra innings that vaulted her team into the 2013 Amateur Softball Association 18-under championships.

“Sydney is a versatile player that can do many things at the plate and defensively,” Torina said. “She will mainly see time in the middle infield for us. She is a fabulous young woman, and I am very proud to have her as a part of this program.”

Griggs [Wichita, Kan.] is an outfielder from Maize High School in Kansas. Her team has won three league championships and tallied three state championship appearances. She racked up a .688 batting average, scored 40 runs and totaled 55 hits en route to league MVP accolades in only 23 games as a junior.

Griggs is a two-time NFCA All-South Central Region honoree and was named to the 2013 MaxPreps Underclass All-American Team. She plays travel ball for the Wichita Mustangs coached by her father, Mark Griggs.

“Emily comes to us from one of the premier travel ball programs in the country,” Torina said. “There’s no doubt she will be ready to take the field as soon as she arrives in Baton Rouge.  She is a highly recruited and extremely talented player that will be a mainstay in the top of our lineup for years to come.”

Lockwood [Walker, La.] is an outfielder from Walker High School in Louisiana. She is a two-time All-District and All-Parish pick. She has come away with over a .400 career batting average and notched 45 stolen bases over her first three seasons.

Lockwood has earned multiple academic awards during her prep career. She is travel ball teammates with Griggs and plays for the Wichita Mustangs.

“It is so important to me that we bring the best local talent to our program, and I know we are upholding that tradition with Taylor,” Torina said. “It will be very exciting to watch this speedy slapper wear the Purple and Gold and take the field for LSU in her hometown.”

Walljasper [Manteca, Calif.] is a pitcher and infielder for Sierra High School in California. She was named the 2013 Valley Oak League Player of the Year and led her team to the Sac Joaquin Section crown. As a junior, she was 18-2 with a 0.47 ERA and struck out 227 batters over her 120 innings of work. Walljasper was just as impressive at the plate where she batted .482 with 20 RBIs and a .815 slugging percentage. She has collected 2012 and 2013 MaxPreps Underclass All-American status.

Walljasper plays travel ball for the San Jose Sting and played a major role in the club capturing the Amateur Softball Association 14-U and 18-U national titles.

“Allie has been a standout at every level she has played at,” Torina said. “She has won championships in virtually every age group. She will be a force in the SEC not just on the mound but in our lineup. She will be an immediate difference maker for our program.”

LSU finished its second season under head coach Beth Torina with the program’s 15th 40-win season since softball was reinstated in 1997. The Tigers are slated to return 14 letterwinners sparked by A.J. Andrews, an NFCA All-America Third-Team and All-SEC First-Team selection, along with Bianka Bell and Jacee Blades, a pair of 2013 All-SEC Second-Team picks.

For all of the latest news and information on Tiger softball, visit www.lsusports.net/softball. Fans can also follow the program on its social media outlets at www.Facebook.com/lsusoftball along with @lsu_softball and @bethtorina on Twitter and @lsusb on Instagram.