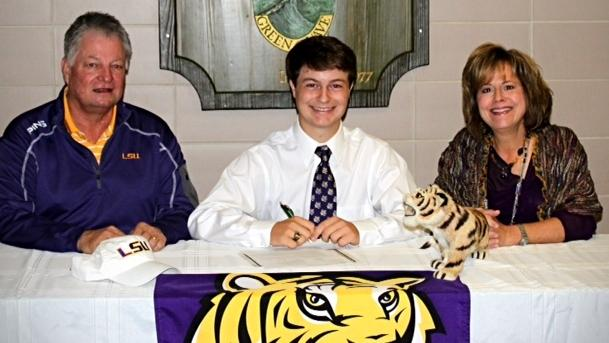 BATON ROUGE – Head coach Chuck Winstead announced Friday afternoon the signing of Louisiana’s No. 1-ranked recruit for the Class of 2014 as Ponchatoula native Blake Caldwell has inked a National Letter of Intent to continue his athletic and academic pursuits as a member of the LSU Men’s Golf team beginning in the 2014-15 season.

A product of Ponchatoula High School, Caldwell signs with the Tigers during the November signing period in the wake of an outstanding junior season as one of the state’s rising young stars.

“We couldn’t be happier to have Blake join our program at LSU,” Winstead said. “He is exactly the kind of young man we would all want representing the Tigers. He is a quality person from a great family, a family that’s been a fixture in golf in Louisiana for quite some time and a family that bleeds purple and gold. Blake has learned how to win tournaments over the last year, and I am quite certain his best golf is in front of him. We all believe he will have a great career at LSU.”

Among his victories in the spring was a five-shot win at the 2013 AJGT Masters Championship held at Santa Maria Golf Club in Baton Rouge, where he fired a 36-hole score of 5-under par  139 to win the crown. Caldwell posted rounds of 3-under 69 and 2-under 70 to finish five shots clear of the field in the event held at the par-70 layout back in March.

Caldwell wrapped up his junior season at Ponchatoula High School by earning a sixth-place individual finish at the Louisiana Division I State Championships in May.

He then tied for second place on the leaderboard at the 2013 Louisiana Golf Association Junior Amateur Championship held at TPC Louisiana in Avondale in July. That’s where he recorded rounds of 1-over 73, even-par 72 and 2-under 70 to finish two strokes off the pace with a final 54-hole score of 1-under par 215.

Caldwell has also been impressive while competing as a member of the American Junior Golf Association in recent years, which includes a runner-up second-place finish at the AJGA Arrowhead Junior Championship at The Bluffs in St. Francisville, La., with a three-round total of 4-over par 220, including an impressive even-par 72 in the second round of the championship.

Caldwell’s sophomore season in 2012 was highlighted by a runner-up finish at the prestigious Gulf States Junior PGA Championship while posting a 36-hole score of 2-over 147 at Lakewood Golf Club in New Orleans.

Caldwell is no stranger to LSU as both of his parents, Bill and Andre’ Caldwell, are LSU Golf alumni. His father, Bill, lettered with the Tigers during the 1972 season, while his mother, the former Andre’ Marchand, earned four letters with the Lady Tigers from 1981-84.