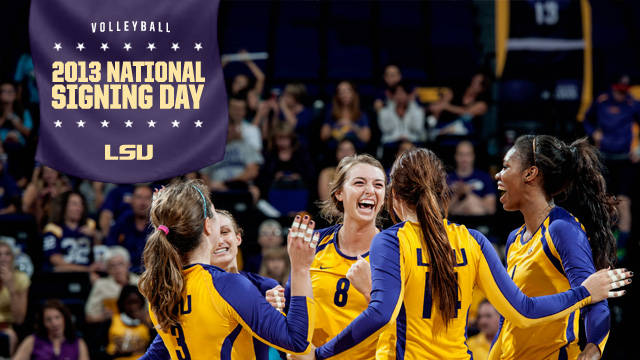 All three players will enter as freshmen for the 2014 season and were among PrepVolleyball.com’s Top 50 Juniors for the Class of 2014.

“We’re extremely pleased to welcome Mylan, Elly and Regina into our LSU volleyball family,” Flory said. “All three players are committed student-athletes that have a passion for LSU and are difference makers for our program. There’s no doubt they will represent our flagship University with pride and in a first-class manner. They will pursue excellence in everything they do, and we are excited about the impact all three will have our program both on and off the court.”

Eugene, a 6-0 outside hitter from Cypress Falls High School in Texas, garnered 2013-14 Under Armour Girls High School All-America Second-Team selection from the American Volleyball Coaches Association [AVCA] last week. She also is up for Gatorade and Under Armour Player of the Year awards and is ranked No. 62 on PrepVolleyball.com’s Senior Aces.

Eugene [Houston, Texas] has extensive experience with USA volleyball and earned a gold medal at the 2010 NORCECA Girls Youth Continental Championships.  She also was the youngest member of the USA Youth National team as an 8th grader in 2008 when she named “Best Attacker” in the Youth International 15-year division. Eugene plays club volleyball for Houston Juniors and will enroll in January at LSU.

“Mylan is a dynamic and versatile outside hitter who moves so easily on the floor in every skill,” Flory said. “Her USA volleyball and club experiences have enabled her to have a vast understanding of the game. Mylan has the ability to terminate physically, but also has great court awareness and understanding of how to be a scorer. Her ball control and defensive skills are outstanding as well. She is a very balanced player and has every offensive shot.”

Ogle, a 5-11 setter from Notre Dame Academy in Kentucky, set her school’s single-season and career assists record in her 2012 junior campaign. She has collected multiple All-District, All-Region and All-State accolades during her career.

Ogle [Fort Mitchell, Ky.] has played a major role in three district and regional championship teams. She has picked up multiple Academic All-State awards and played club volleyball for Team 2 before moving to Tri-State Elite this season.

“Elly is a very athletic and physical setter,” Flory said. “She also is an extremely tough player who is a fierce competitor and fights in every aspect of the game. Elly is a winner who has experienced success on every team in every sport she has played on. Her speed and jumping ability allow her to be a great defender and blocker.”

Tillis, a 5-11 outside hitter from Rockwell Heath High School in Texas, secured 2013-14 Under Armour Girls High School All-America Honorable Mention status from the American Volleyball Coaches Association [AVCA] last week. She also has been nominated for the Gatorade Player of the Year honor and is tabbed No. 73 on PrepVolleyball.com’s Senior Aces.

“Regina is an explosive athlete and will be a six-rotation outside who possesses great terminating skills, solid ball control and excellent defensive ability,” Flory said. “She plays with a great passion and fire. Her speed and jumping ability fit right into our offensive system. Regina’s quickness off the floor is like a middle blocker and will truly be a point scorer from the front and back rows.”

LSU continues its stretch of five matches over a 10-day span Friday as Auburn visits the Maravich Center for the second meeting of 2013 between the two teams. First serve is on-tap for 7 p.m. with live video and live stats available for Geaux Zone subscribers at www.LSUsports.net/live. Admission to all 2013 home matches is free compliments of the Advocate’s “Geaux Free” program.