Louisville Pulls Away from Women's Basketball 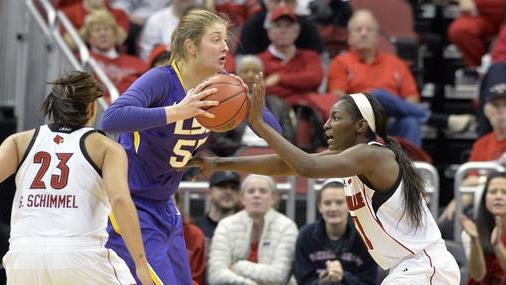 LOUISVILLE, Ky. – Senior forward Asia Taylor scored a game-high 23 points and fourth-ranked Louisville pulled away with a 20-0 second-half run to defeat the 14th-ranked LSU women’s basketball team, 88-67, in the semifinals of the preseason WNIT on Thursday night in the KFC Yum Center.

Louisville (3-0) advances to Sunday’s WNIT championship game and will face the winner of Oklahoma-Gonzaga. There will not be a WNIT third place consolation game. The Lady Tigers (2-1) will continue their regular season with their next game at 7 p.m. Wednesday against Hampton in the Maravich Center. Season ticket holders are asked to discard the remaining “if necessary” WNIT tickets.

A crowd of 8,009, including 2,500 who received a free beer from Louisville head coach Jeff Walz upon entrance, saw a back-and-forth contest for 26 minutes until the Cardinals capitalized on LSU turnovers and got into the up-tempo pace of play they wanted.

“The game is a 40-minute game and we only played about 30,” said LSU head coach Nikki Caldwell. “We can’t take possessions off because against a team like Louisville, they will tear you apart. (Asia) Taylor really set the tone for tonight, coming after our post game. The two areas of concern for us were their transition game and their offensive rebounding. They capitalized on both.”

Taylor, who missed all of last season with a hip injury, was dominant on both ends of the floor. She was 10-of-16 shooting while grabbing 10 rebounds and two steals. Five Cardinals finished with double-digit scoring, including 15 points from All-America guard Shoni Schimmel.

The Lady Tigers hung tough in the first half as Plaisance established herself inside with nine points. LSU trailed 40-36 into the locker room and then 49-46 following a Danielle Ballard offensive rebound tip-in with 16:04 to play.

Schimmel then showed her athleticism when she found Taylor on a behind-the-back pass for a lay-up that drew the crowd to its feet. DaShawn Harden followed with an errant pass that was stolen by Taylor who scored on another lay-up. Four straight possessions with turnovers by LSU pushed the lead to double-digits for the first time following a tough fadeaway jumper from Schimmel.

Plaisance ended the drought with a bucket and the team’s traded threes with 10:53 to go. With LSU trailing 60-54, the Cardinals went on the back-breaking 20-0 run with most of the scoring coming in the paint and on offensive rebounds. The Lady Tigers went cold from the floor for over five minutes. Taylor scored six straight points. Louisville, who was 1-of-7 from three in the first half, drained two threes during the spurt.

“I thought we started jump shooting the ball too much,” said Caldwell. “We should have gotten the ball inside and been more patient. The second thing was we didn’t take care of the basketball.”