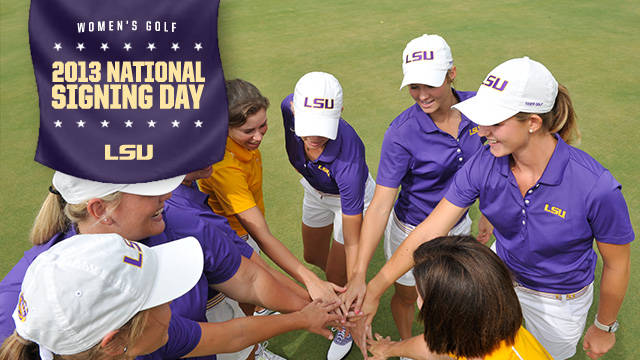 The signees are Sydney Cavin of The Dunham School in Baton Rouge; and, Claudia De Antonio of Weston, Fla., who attends American Heritage High School in Plantation, Fla.

“I would like to welcome both Sydney Cavin and Claudia De Antonio to our team starting in the fall of 2014,” said Bahnsen. “Sydney brings a passion for LSU. She is an outstanding young lady that I know will contribute to our team. Claudia brings with her a lot of experience competing on the international level. She comes from a devoted family that will support her and our LSU team in our efforts to win Championships. I can’t wait for them to have the opportunity to compete wearing Purple and Gold.”

Cavin has a tie for third in the American Junior Golf Association event at The Bluffs in St. Francisville on her resume’ and played for Team Louisiana in the 2013 Tri-State event vs. Mississippi and Arkansas. Cavin also captured the girls’ 15-18 division in the Arrowhead Junior Masters tournament this past March at Santa Maria in Baton Rouge.  Her Dunham team took home third in this year’s state championships in Shreveport and she finished in 6th place in the individual competition.

De Antonio won the 2012 AJGA Florida junior championship and was 5th at the 2012 prestigious Doral Publix Junior event. She also captured the 2012 South Florida PGA Junior Tour stop in Bonita Springs with a second round of 6-under 65 to finish with a two-day score of 2-under 140. That was one of three wins on the year on the tour that eventually led to her being named South Florida PGA Player of the Year. In January, she was named by the Miami Herald to the All-Broward County Golf team.