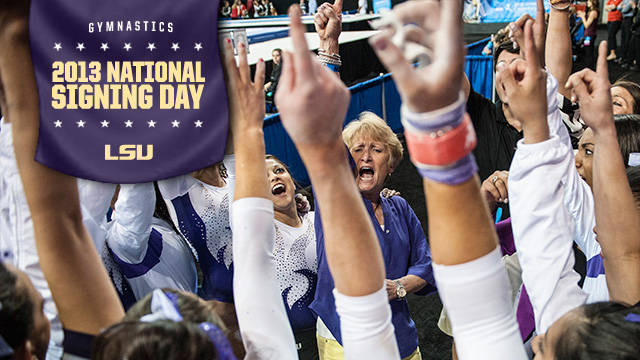 A native of Carrollton, Ga., Hambrick is a level 10 gymnast who competes for West Georgia Gymnastics where she is coached by her mother Laurie.

Macadaeg hails from San Mateo, Calif., and she competes as a senior international elite gymnast for coaches Armen Astoian and Oksana Bystrova at San Mateo Gymnastics.

“Both of these young ladies are high-impact athletes that are going to help us on every single event,” Breaux said. “By adding Erin and Myia, this is kind of a reloading of our team especially when you look at the strength of what we are losing with Kaleigh Dickson, Sarie Morrison and Maliah Mathis who are All-Americans and great athletes. Plus we are graduating walk-ons who are great contributors and have performed extremely well academically.”

Hambrick is a five-time Junior Olympics (J.O.) National Championships qualifier. She captured the floor exercise title, finished second on beam, fifth on vault and placed third in the all-around at the 2013 J.O. Championships.

She earned top-five finishes on every event and the all-around at the 2013 regional championships, and she nearly swept the titles at the 2013 Georgia Level 10 State Championship when she won the vault, beam, floor and all-around titles and placed second on bars.

“We are excited about Myia because her development has been so consistent, especially over the last two years, and she is getting tremendous coaching from her mother,” Breaux said. “She is such a powerful gymnast and a solid all-arounder who always leads this region and is a national qualifier every year.”

“With Myia, a year ago, her bars would have been a concern,” Clark said. “Everyone knew she was a powerfully strong athlete and very good on beam, but this past year she’s addressed that concern and is continuing to get much better. With the development Myia has made, she can come in and contribute on four events for us.”

As a level 10 gymnast in 2012, Macadaeg qualified to J.O. Nationals where she won the beam title, finished sixth on vault and placed 10th in the all-around.

“Erin has very strong Louisiana ties because she has a lot of family here, so we are happy that she can feel like she is coming home,” Breaux said. “She is an elite-level athlete, and we are just really excited about her consistency and her skill level. We feel like she will give us four great events.”

Clark added that Macadaeg has the potential to make an immediate impact for the Tigers when she steps on campus.

“Erin brings a very artistic style and quality combined with a good bit of power, and she’s a very clean gymnast,” Clark said. “There aren’t any holes in her gymnastics.”

“Both of these young women possess the character, attitude, and desire needed to help us win a championship,” Breaux said. “They are future leaders in our program, and we are thrilled to have them both!”

Hambrick and Macadaeg will enroll at LSU in summer 2014 and will compete as freshmen in the 2015 season.