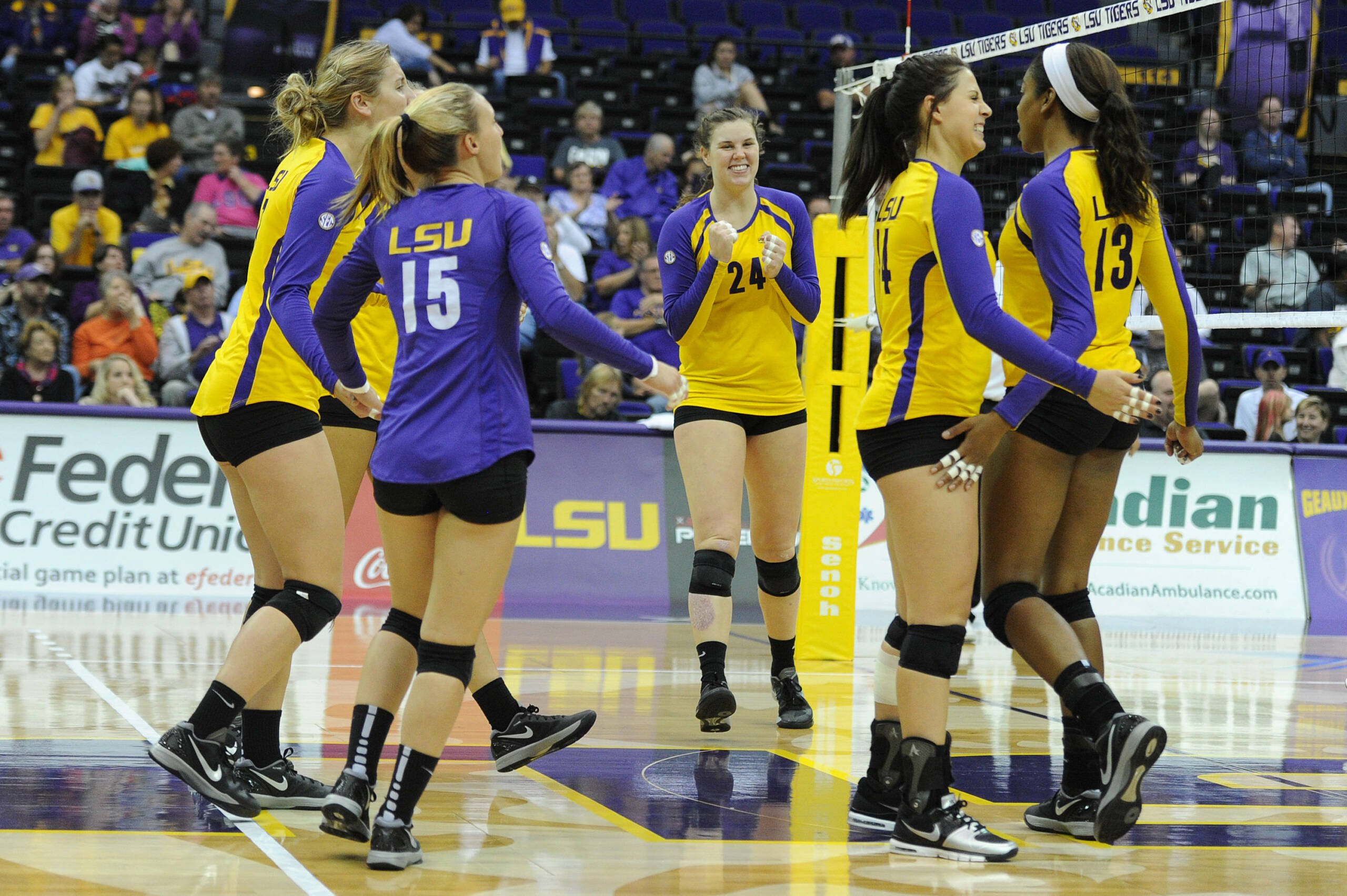 BATON ROUGE – The LSU volleyball team continues its stretch of five matches over a 10-day span with a mid-week tilt versus Texas A&M Wednesday at the Maravich Center.

Wednesday’s first serve is slated for 6 p.m., and the match will be carried by Cox Sports Television. Live stats also will be available inside the Geaux Zone at www.LSUsports.net/live. Admission to all 2013 home matches is free compliments of The Advocate’s “Geaux Free” program. The first 500 fans will receive a flat water bottle.

Last weekend, LSU (15-8, 5-6 SEC) split a pair of five-set road decisions and remain in eighth place in the SEC standings. The Tigers defeated Georgia before falling to No. 20 Kentucky. LSU has posted a 7-3 mark in five sets, and the seven five-set victories this season are tied for second-most in program history with the 1985 and 1986 teams.

Texas A&M (13-10, 5-7 SEC) is coming off consecutive road victories over Mississippi State and Ole Miss. The Aggies are led by Sierra Patrick and Angela Lowak, who have posted over 3.00 kills per set. Allie Sawatzky has averaged a balanced 9.99 assists, 2.13 kills and 2.29 digs per set. She also has compiled a SEC-leading six triple-doubles. On the back row, Kelsey Kinley has reeled in 3.41 digs per set.

The two teams have had five of its last eight meetings since 2002 go five sets, including a LSU 3-2 comeback victory that gave head coach Fran Flory her 400th career win earlier this season in College Station. The Tigers wiped away a two-set hole fueled by Briana Holman‘s 18 kills and seven blocks. Over the final three sets, LSU’s offense connected for 39 of its 59 kills and a .356 hitting percentage. Conversely, the Aggies were limited to 33 kills and a .103 hitting clip.

“The mentality of this match is really important,” Flory said. “It’s going to be won on our side of the net, or on Texas A&M’s side of the net. The team that manages their side best is probably going to be the one that ends up with the ‘W’ at the end of the night. They are a very similar team to us. They’re building, they’ve tweaked their lineups, they’ve made some changes and they’ve got a lot of young players. In many ways, our season has paralleled theirs. I think they’re a team that has continued to improve, and I know we’re a team that is continuing to improve. We say it every week: the best is yet to come. We got another step closer, but there are still a couple of pieces that we can put in there.”

Holman, the three-time SEC Freshman of the Week, put together a banner weekend where she blasted 3.70 kills per set on a .378 hitting percentage. She racked up a career-best 20 kills against then No. 20 Kentucky. The Texas native continues to pace with 1.51 blocks per set which also rank seventh nationally. Her 142 total blocks are the fourth-highest total for a freshman in program history.

LSU’s pin hitters of Helen Boyle, Cati Leak and Katie Lindelow each recorded over 2.40 kills and 2.40 digs per set in addition to accounting for five double-doubles last weekend. Leak’s 3.10 kills per set are among the SEC’s Top 20, while Lindelow has garnered a double dip in seven of her last 10 outings. The 14 kills for Boyle during the Georgia match was her second-highest output of the season.

“I think their mentality (Boyle, Leak and Lindelow) is the biggest change,” Flory said. “We talked early in the season about scoring deep and hitting certain shots. Unfortunately, that kind of forced them into a limited mentality. Then, we talked about being more creative. That caused them to forget about having any pop on the ball. Part of their success last weekend was a maturation of them and an understanding the game. We’re young, and we’ve got a lot of players at positions that they haven’t played before. However, I think we continue to grow and continue to get better. Those three specifically, and you have to throw Emily Ehrle in there who is doing a great job and beginning to get some nice reps in practice. You put those four in there, and you have a pretty balanced offense.”

Malorie Pardo was the catalyst for LSU’s offense putting up 13.20 kills per set on a .241 hitting ratio last weekend. She added two double-doubles to bring her season total to 15 which are tied for the top spot on the SEC leaderboard. During the Kentucky match, Pardo became the first setter since former All-American and LSU Hall of Fame inductee Dani Reis to put together three straight seasons of 1,000 career assists.

Haley Smith has corralled 3.70 digs per set and reeled in 10-plus scoops during 18 of her 19 starts at the libero position. Her 23 digs against No. 20 Kentucky was her third-highest career output.

“We’ve talked all year about focusing on the process and not the outcome,” Flory said. “We’ve also talked about taking care of your job and responsibilities – playing within yourself and your realm of abilities. If we understand that and our team continues to buy into that, I think that’s a portion for why we’re starting to elevate as a team and perform at a higher level. We’ve got a lot of respect for our opponents, and we know there are no easy matches in the SEC. We’ve got to be ready every time we step on the court.”

It’s “Student Point Night,” and the Texas A&M match marks the fifth of six “Attend & Win” matches where one student will take home a 32-inch television. To be eligible for the “Attend & Win” prizes, fans must stay through the entire match.