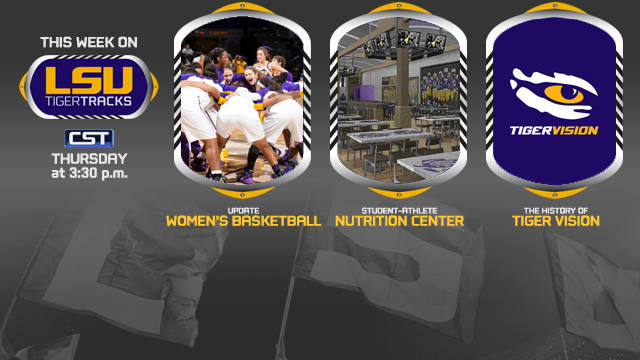 BATON ROUGE, La. – This week’s edition of LSU Tiger Tracks, a program highlighting various aspects of the university and its athletic department, can be seen at 3:30 p.m. Thursday on Cox Sports Television.

LSU Tiger Tracks begins with an update from correspondent Garrett Walvoord on the Lady Tiger basketball team, which plays at Louisville Thursday night in the Preseason WNIT.

The show continues with a visit to the studio from Tiger Athletic Foundation vice-president Rick Perry, who discusses the planning of new athletic facilities, including a nutrition center for all student-athletes, a gymnastics practice facility and an indoor tennis center.

LSU Tiger Tracks also includes a feature on the unique history of TigerVision, LSU’s ground-breaking pay-per-view network that produced its final telecast earlier this season when the Tigers faced Furman in Death Valley.