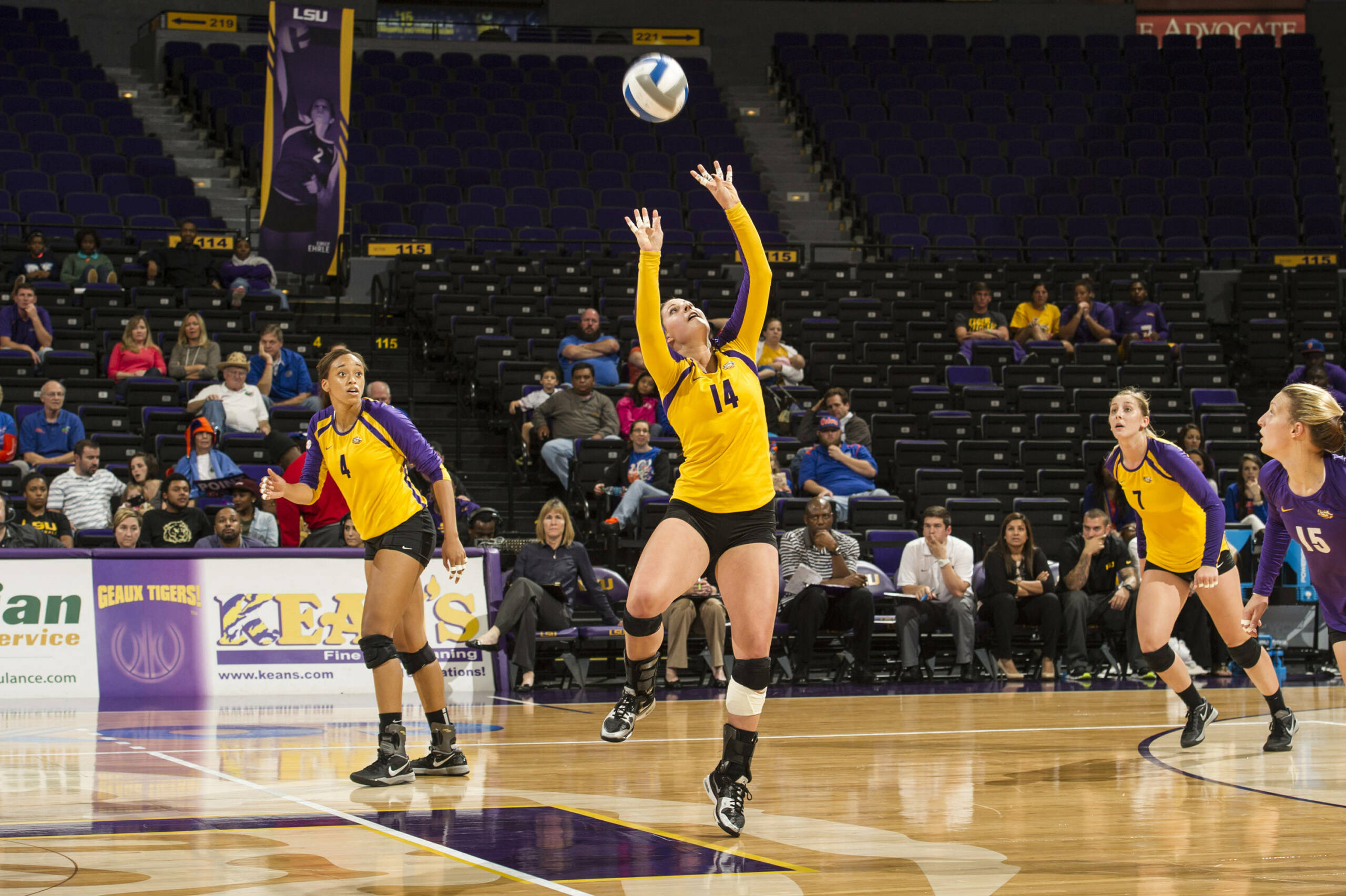 Briana Holman, MB, 6-1, Fr., DeSoto, Texas
Briana Holman nearly led the Tigers to an undefeated road weekend against Georgia and No. 20 Kentucky, who entered the weekend with a combined 20-2 home record. She powered home 3.70 kills per set on a .378 hitting clip over her three rotations. Her 1.20 blocks per set enabled Holman to keep the top spot in the SEC rankings. The Texas native cranked 17 kills and added seven blocks versus Georgia to lead LSU to its seventh five-set victory of the season. Holman saved her best effort for the fifth set and ripped five kills on seven errorless swings to go along with two blocks. During the Kentucky match, Holman connected for a career-best 20 kills on .421 hitting percentage. Her previous career-best was 19 kills in LSU’s victory over Baylor.

Notes on the Tigers
LSU split a pair of five-set road decisions defeating Georgia before falling to No. 20 Kentucky over the weekend. The Tigers are now 15-8, 5-6 in SEC play and hold eighth place in the SEC standings. For the season, LSU is 7-3 in five-set matches. The seven five-set victories are tied for second-most in program history for a single season with the 1985 and 1986 teams. The 2007 Tigers won nine five-set decisions. Briana Holman cranked 3.70 kills per set on a .378 hitting percentage en route to SEC Freshman of the Week honors. During the UGA match, Holman buried five of her 17 kills and added two of her seven blocks in the fifth set. Holman followed that performance up with a career-best 20 kills on a .421 hitting clip at No. 20 Kentucky. Her previous career-high was 19 kills in LSU’s five-set win over Baylor. Malorie Pardo was the catalyst for LSU’s offense putting up 13.20 kills per set on a .241 hitting ratio. She added two double-doubles to bring her season total to 15 which are tied for the top spot on the SEC leaderboard. The Texas native became the first setter since former All-American and LSU Hall of Fame inductee Dani Reis to put together three straight seasons of 1,000 career assists. The trio of Helen Boyle, Cati Leak and Katie Lindelow each posted over 2.40 kills and 2.40 digs per set to combine for five double-doubles between them over the weekend. Desiree Elliott continued her climb up the program’s all-time kills list. She surpassed former All-American Brittnee Cooper (2006-09) and former teammate Madie Jones (2009-12) for 15th place. Her 1,121 career kills also are fifth among active SEC players. On the back row, Haley Smith tacked on 3.70 digs per set. She registered 23 scoops at No. 20 Kentucky, her third-highest career output. Smith has collected 10-plus digs in 18 of her 19 starts at the libero position. LSU concludes a stretch of five matches over a 10-day span with home matches versus Texas A&M [Wednesday – 6 p.m. CT] and Auburn [Friday – 7 p.m. CT] before traveling to face Tennessee [Sunday – 12 p.m. CT]. The A&M match will be carried by Cox Sports Television.