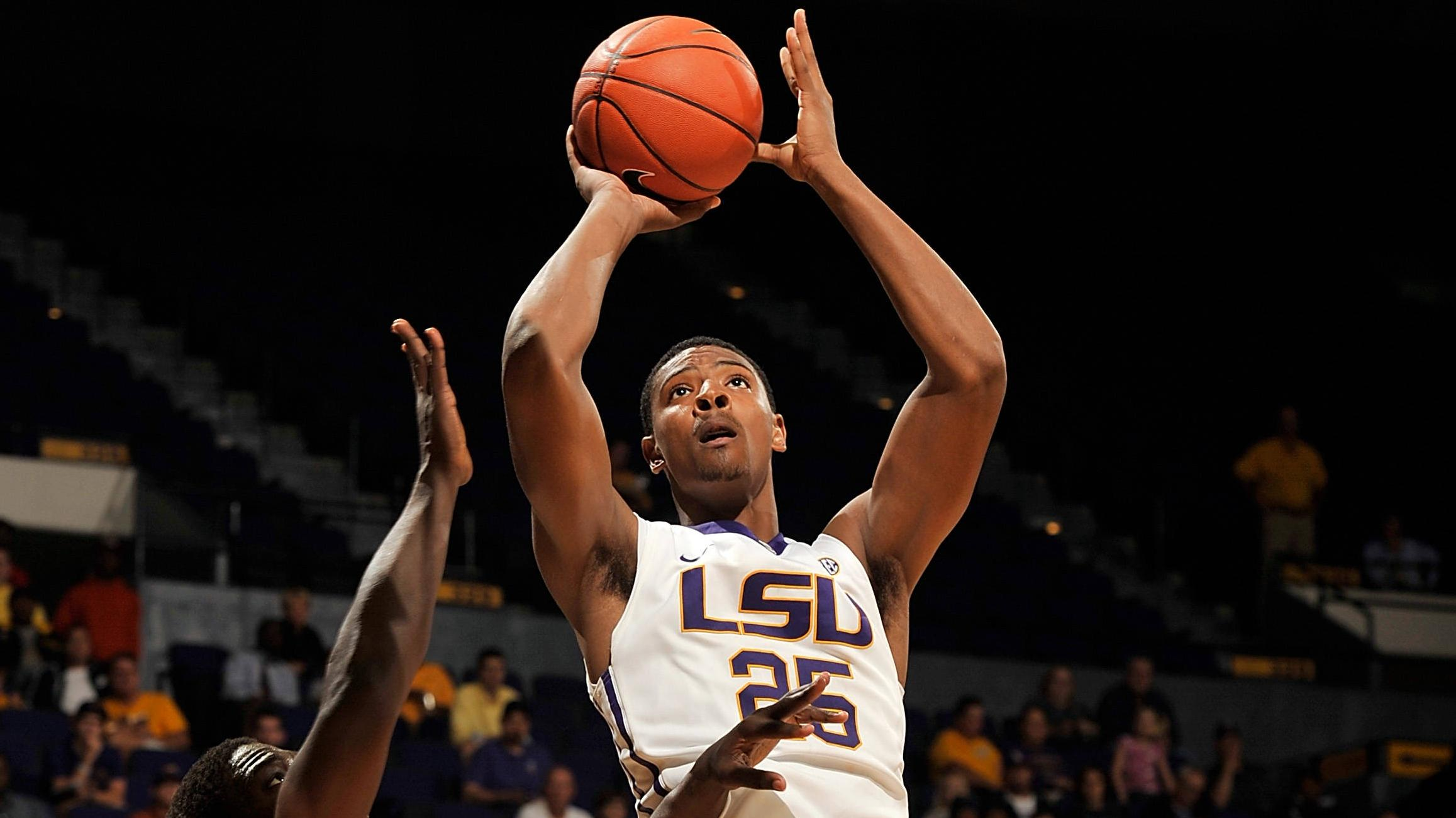 AMHERST, Mass. – The LSU Tigers will make their first appearance on the ESPN Tip-Off Marathon here Tuesday at an early time when they open the 2013-14 men’s basketball season against UMass at the Mullins Center.

The game will tip at 11 a.m. EST (10 a.m. Baton Rouge time) and will be seen on ESPN2. Bram Weinstein and Kara Lawson will have the television call while Jim Hawthorne will begin his 34th season calling LSU Basketball and he will again be joined by former Tiger Ricky Blanton on the LSU Sports Radio Network broadcast (98.1 FM in Baton Rouge; WWWL-1350 AM in New Orleans) and in the Geaux Zone at LSUsports.net. Longtime broadcaster Kevin Ford will return as studio host of the broadcasts.

The game is part of over 24 hours of college basketball games on the ESPN family of networks and LSU under second-year head coach Johnny Jones is getting its first chance to participate. For UMass, it will be their third time in the Marathon, defeating Harvard last year (77-74) in almost the same time slot. UMass also played in the inaugural marathon in 2008, in an 11 p.m. CST game at Memphis.

LSU will be the 12th Southeastern Conference team to open play (Tennessee and Vanderbilt will open later Tuesday) when it faces the Atlantic 10 team. UMass opened on Sunday with a big decision over Boston College in Boston, 86-73.

Quarterman is from Savannah, Ga., Mickey from Dallas, Texas and, Martin from Madison Prep of Baton Rouge.

If those three freshmen start again, it will mark the first time since the NCAA national semifinal game in 2006 that LSU will have started three freshmen (Tyrus Thomas, Garrett Temple and Tasmin Mitchell).

In the exhibition, Stringer hit six treys to score 22 points with Mickey getting 12 points and eight blocks, Martin 11 and Malik Morgan, a sophomore from River Ridge, getting 10 off the bench. JOBIII and junior college transfer John Odo (from Nigeria) each grabbed 11 boards.

At UMass’ win at TD Garden in Boston, UMass posted just under 50 percent from the floor (32-65) and had a big 44-27 advantage on the boards. Cady Lalanne led the winners with 27 points and 12 rebounds, while Chaz Williams added 20 points and Sampson Carter posted 12 points. Derek Kellogg (86-77), a former four-year letter winner at the school, is in his sixth year as the head coach.

Before the team departed for Amherst, Coach Jones met with the local media and his comments are below the national polls released on Monday.

Head Coach Johnny Jones
Opening Statement
“After a scrimmage and an exhibition game, we feel like our team has had an opportunity to continue to improve. And now, the season is upon us. We look forward to the challenges that we have ahead. I think right out of the gate we are playing a very tough basketball team in UMass, a team that’s had great success in this early part of the season as well as yesterday with another victory [over Boston College] that I thought they played extremely well in. They have a great combination on their basketball team at point guard and center – two areas that I think that it’s very clear that they are the leaders of their team where a lot of their scoring and their contributions really come from. Both guys [Cody Lalanne and Chaz Williams] had over 20 points yesterday, and the center having a double-double means a lot. Their point guard [Williams] is special. He’s a very good, heady basketball player that not only can score but really create opportunities for other people on the floor. And we’re certainly going to have to pay a lot of attention to him. But it’s one of those challenges that we really look forward to and [are] excited about getting started and being a part of this 24 hour challenge starting up at midnight tonight.”

On Shavon Coleman…
“Shavon is ready to go. He’s had a couple of really good practices the last two days, and we’re excited about him. He is back to I would say full speed right now, and we look forward to his contributions that he’ll make on our team tomorrow.”

On UMass center Cady Lalanne’s double-double performance against Boston College…
“He’s been one of those guys that’s really been a focal point for them and [is] tremendous in terms of catching the ball in the low block. He’s a serious low-block presence for their team. And [he] shoots a very high percentage from down there as well. At 6-foot-10 about 250 [pounds], he’s a load inside.”

On adjusting the starting lineup to UMass’ size…
“We’ll see, but we’re hopeful they’ll switch their lineup and take their point guard out and put a bigger guard in because we’re big. [Laughs] No, it’ll be a good challenge for us. I think we’re very capable. Both of those guys [Anthony Hickey and Tim Quarterman] are going to have to see some quality minutes, and we’ll definitely have a rotation at point guard. It’s really going to have to be by committee to slow him down [UMass’ Chaz Williams] because he’s very talented. But both guys, [Anthony] Hickey and [Tim] Quarterman, will have an opportunity to see him.”

On the message he wants to get across to his freshmen…
“It’s just – and that’s what’s so great about your preseason and playing your non-conference schedule – you play that type of schedule in preparation for league. All of these guys have been in big games. They’ve been in really good environments, be it from their high school teams to championship games, as well. And college is certainly a different intensity level and all. They will have to go through it. I think that’s one of the things that’s been good for us to have – one, the preseason scrimmage because of the talent level that we had an opportunity to play against. Then, to have an opportunity to play here under the lights with an exhibition game at home, I think that was really good for us as well. So, I think its growth for them, but it’s hard to simulate or get ready for what they will encounter tomorrow in college basketball – their first division one basketball game.”

On adjusting the structure to an earlier morning start on the road…
“We’ve had some earlier practices this week. Be it Saturday and Sunday, we’ve gotten up early and gone through – yesterday as early as 8 a.m. in the morning, we were together. We took in some church and came back and practiced right afterwards. So, we’ve been moving around a little bit earlier than normal as a group.”

On Jarell Martin‘s development on the wing…
“I thought he played really well. I thought he may have missed a couple of shots which is normal I guess really for anyone. As the game progressed, I thought he played exceptionally well. He came down off of a fastbreak, finished at the rim, came right back and hit another jumper. He rebounded the ball well and defended good from his position. So, we thought that he played well. He has the ability to really – with his basketball IQ and he has picked things up so well – to go from the perimeter to inside. That’s something that is really hard to do at times, to play multiple positions like that. He’s picked it up fairly easy, and we think that he has the ability to be really effective from both spots.”

On the defensive strategies he has implemented for this season…
“We’re very capable because of our lineup. We can really go big and show some zone. We can go big as well and do some switch. We can show some multiple defenses because of our size, and I think that’s going to be a strength of ours this year that’s really going to be able to help us.”

On getting off to a good start on the road…
“It’ll be extremely helpful and exciting for us if we can get off to a great start with a young and somewhat inexperienced team in some spots tomorrow. This is something that you look forward to especially in the early part of the season. This will be an early test for us, but it’s important for us to get off to a great start.”