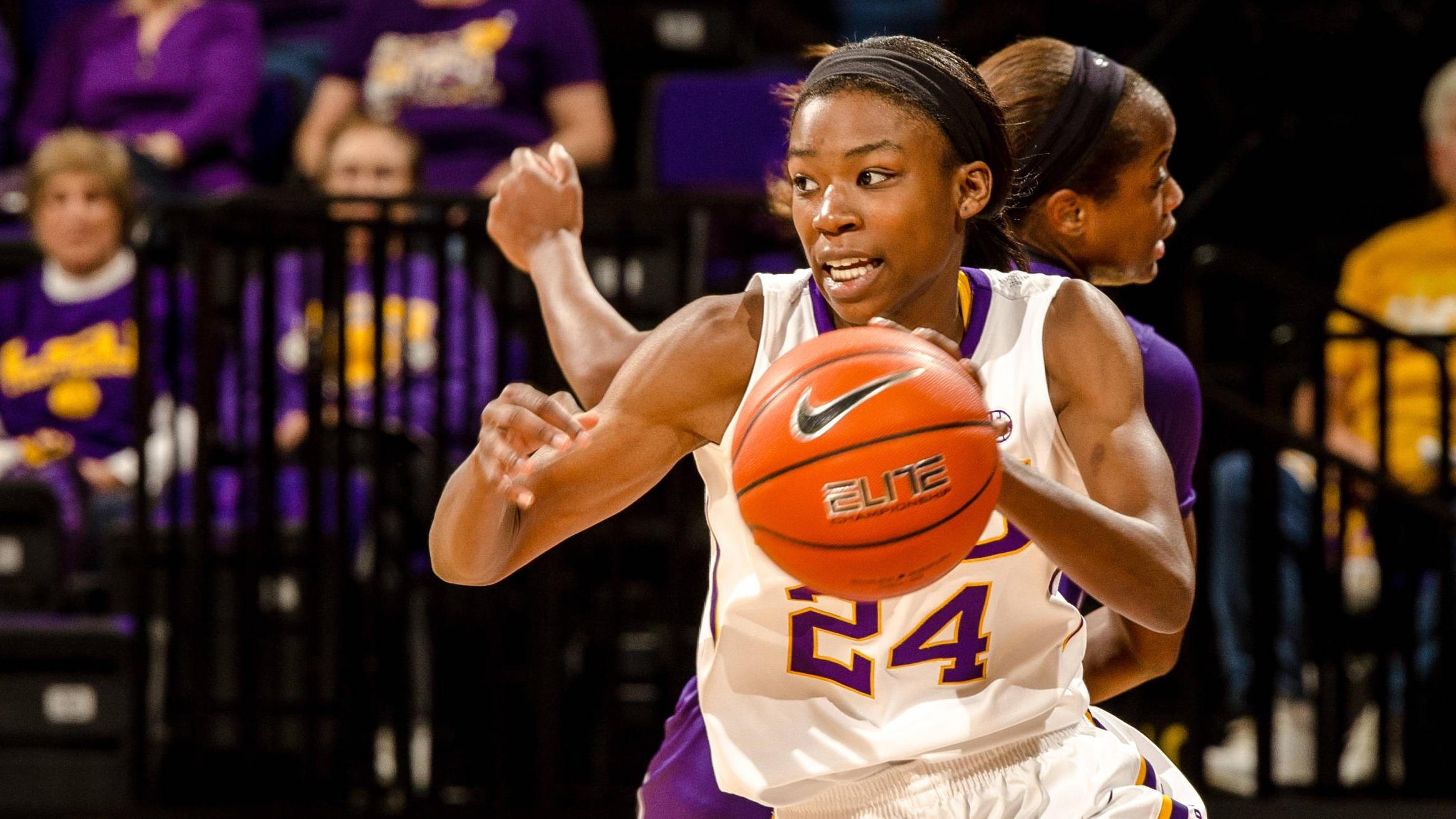 BATON ROUGE – Junior guard DaShawn Harden scored 20 points in her debut and led a balanced up-tempo attack as the 15th-ranked LSU women’s basketball team won the Sue Gunter Classic and advanced in the preseason WNIT with an 86-58 season-opening win over Stephen F. Austin on Friday night in the Maravich Center.

The Lady Tigers (1-0) will now host St. Joseph’s in the second round of the preseason WNIT at 2 p.m. Sunday. The Hawks were an 85-57 winner over Mount St. Mary’s on Friday night in its opener.

Harden was one of four Lady Tigers who finished with double-figure scoring as LSU shot 49.3 percent from the floor and dished out 19 assists. Harden, a junior college All-American a year ago, shot 8-of-14 from the perimeter and was 4-of-6 from three-point land.

“She can put the ball in the hole, and she does a great job of making it easy for her teammates because she spaces well,” said LSU head coach Nikki Caldwell. “For us to have 19 assists, I thought our guards did a good job of trying to find her.”

Senior forward Theresa Plaisance, a 2014 National Player of the Year candidate, got off to a solid start making her first four shots and finishing with 18 points and a game-high eight rebounds. Sophomore guard Danielle Ballard poured in 18 points and dished out six assists with three steals. Freshman Raigyne Moncrief added 10 points, six assists and three steals in her debut.

Friday night’s season-opener was dedicated to the late Sue Gunter, who spent a combined 40 seasons as head coach at both Stephen F. Austin and LSU. The Naismith Hall of Famer won 708 games and led the Lady Tigers to 11 NCAA Tournament appearances.

Gunter would have liked what she saw on Friday when the Lady Tigers built a 46-29 lead at the half. Harden nailed three treys in the first stanza. Senior center Shanece McKinney made the highlight play of the first half when she rejected a shot on the defensive end, ran the floor and converted an old-fashioned three-point play.

The Ladyjacks (0-1) then showed why they are picked to win the Southland Conference with their experience as they crawled back from a 20-point deficit in the second half. LSU led 51-31 and managed only one field goal over the next five minutes. SFA put together an 18-5 spurt, a 9-0 run during that time to slice the Lady Tiger advantage to 53-48.

Ballard then set the tone for the remainder of the game with her quickness and hustle plays. She scored five points during an 11-0 run as LSU took firm control. Freshman Rina Hill made a steal at the top of the key and raced the other way for a lay-up. Plaisance converted a three-point play. Harden’s three from the right wing put LSU up 74-52 with 6:27 to go. The Lady Tigers’ depth wore the Ladyjacks down the rest of the way.

“Stephen F. Austin, they’re a very competitive team,” said Caldwell. “I thought they did an incredible job of attacking us off the bounce. I was proud of our team for adjusting. We were able to go deep into our bench. Rina Hill did well in the second half with her defensive presence. I also liked that we were able to use the most of our lineup.

SFA shot 34.4 percent for the game and committed 23 turnovers, which led to 18 LSU points. The Lady Tigers racked up 12 steals and out-rebounded the Ladyjacks, 45-37.

On Stephen F. Austin’s comeback early in the second half…
“Stephen F. Austin, they’re a very competitive team. I thought they did an incredible job of attacking us off the bounce. I was proud of our team for adjusting. We were able to go deep into our bench. Rina Hill did well in the second half with her defensive presence. I also liked that we were able to use the most of our lineup. Toward the end of the first half we had a quicker, faster lineup in there along with Shanece McKinney. They really did a good job.”

On trusting freshman G Rina Hill during Stephen F. Austin’s second-half comeback…
“Rina is older, too. She’s very mature. She has a very high IQ for the game. She understands position, and she also did a great job of getting those ‘opposite-end points’ by standing in the lane and getting some charges.”

On junior G DaShawn Harden scoring 20 points on 8-for-14 shooting…
“She can put the ball in the hole, and she does a great job of making it easy for her teammates because she spaces well. For us to have 19 assists, I thought our guards did a good job of trying to find her. Raigyne Moncrief and Danielle Ballard each had six assists; they were looking for the hot hand. Obviously, Harden was the recipient of that a lot. She doesn’t need a lot of attempts.”

On the team’s depth being able to wear Stephen F. Austin down…
“We have depth, and that’s plus for our team. We’re able to go 11 deep in our roster, and that allows us to really keep a tempo that we hope to be in our benefit. A lot of credit to Stephen F. Austin for really getting in there and battling with us.”

On how the team reacted to SFA’s run early in the second half…
“We were telling each other to slow down – we were going too fast. We just weren’t sticking them enough on defense, we were letting the guards drive right past us [and] post players were outplaying our post players. We had to come in together and talk to each other. We were telling each other, ‘Hey, we got to be physical with them.’ After we did that – we started adjusting – we did better.”

On how the guards on the team complement each other…
“Those players are great. We have chemistry on and off the court. They can score – they can play defense – they can defend, they can get rebounds. They can do all sorts of things for this team.”

On her hitting consecutive three pointers from nearly the same mark…
“I think that was just a coincidence I was over there every time. I guess I can say I like that spot now.”

On SFA’s early run in the second half…
“Coach told us that in order to get stops we had to do a better job grabbing rebounds, so that’s what we did.”