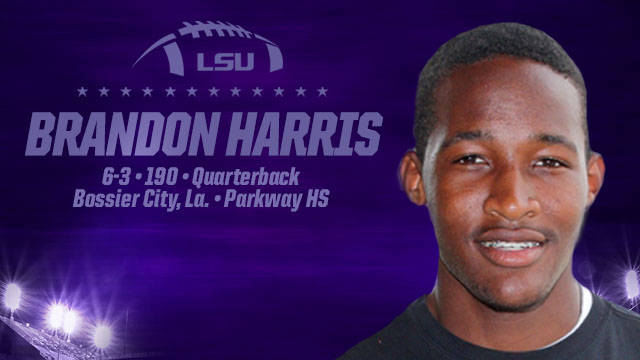 Under the new NCAA legislation, it permits high school seniors who are on schedule to graduate at mid-year and who plan to enroll in college for the spring semester, the opportunity to sign an Institutional Financial Aid Agreement.

Harris will enroll at LSU in January and will take part in spring practice with the Tigers.

“We are excited about having Brandon join our program,” LSU coach Les Miles said. “He comes to us with a great understanding of the game and his position. He’s very bright and he’s a quality person with great character. He’s a big addition to our team.”

Harris attends Parkway High School in Bossier City, La., and he is considered the top in-state quarterback prospect and one of the top signal callers in the nation.

At 6-3, 190 pounds, Harris is a consensus four-start prospect across all major recruiting sites. He is listed as the No. 3 high school dual-threat quarterback in the nation by ESPN and 247Sports, No. 5 by Rivals and No. 7 by Scout.

Through eight games in his senior season, Harris is 109-of-186 passing (58.6 percent) for 1,989 yards and 22 touchdowns, and he has guided the Panthers to a perfect 8-0 record and the No. 2 state ranking in class 5A entering the final week of the regular season.