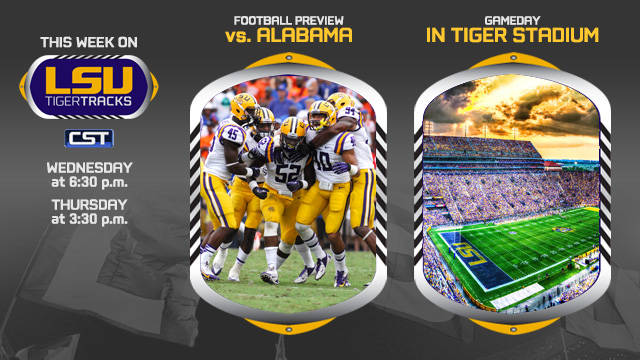 LSU Tiger Tracks begins with a preview by correspondent Garrett Walvoord of the Top 10 showdown between LSU and Alabama Saturday in Tuscaloosa, Ala.

The show continues with a feature narrated by Tiger Stadium announcer Dan Borne’ on the preparation involved in playing host to a football game in Death Valley.

LSU Tiger Tracks also includes an interview with Dr. Graham Vance, a member of the Tigers’ 1937 football team and an athletic trainer who worked under Mike Chambers, the namesake of LSU’s live Bengal Tiger mascot.

The show concludes with a piece on Dr. F. King Alexander and his first few months on the job as LSU’s President and Chancellor.