by Will Stafford (@WillStaffordLSU)
Bracket +0 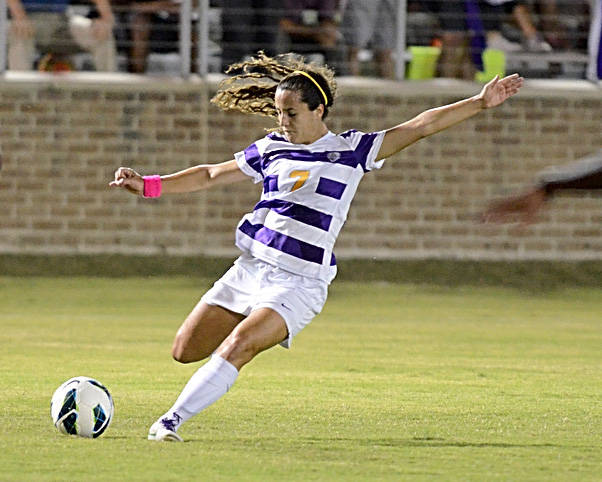 BATON ROUGE – The LSU Soccer team will kick off postseason play as the No. 7 seed at the 2013 Southeastern Conference Women’s Soccer Tournament as it will face No. 10 seed Auburn in the opening match of the tournament on Monday afternoon with kickoff set for 4 p.m. CT at the Orange Beach Sportsplex in Orange Beach, Ala.

This marks the first time the sides will square off during the 2013 season after not appearing on each other’s 11-game SEC schedule during the regular season.

LSU (9-8-2, 5-5-1 SEC) finished the season in a tie for sixth place on the final SEC table with 16 points in league play to move up two spots from its eighth-place conference finish a season ago. With its performance, LSU and Florida remain the only two teams to finish among the Top 8 of the final SEC standings in each of the last nine seasons dating back to 2005.

Auburn (7-8-4, 3-5-3) powered itself into the SEC Tournament field thanks to a three-game winning streak and six-game unbeaten streak in the second half of the SEC season after finishing the regular season with a 3-0-3 mark since Oct. 11. Auburn is just one year removed from an appearance in the SEC Tournament final after finishing runner-up with a 3-0 defeat to Florida in the championship match last season.

It has been a series of streaks in recent years as LSU posted a five-game unbeaten streak with a 4-0-1 mark from 2008-10 before Auburn’s current three-game winning streak since 2011.

Auburn is LSU’s most frequent opponent in the SEC Tournament as this marks the fifth meeting between the two sides in postseason play with LSU owning a 2-1-1 mark in their four previous matches.

LSU made history in 2002 as the first team to knock off the No. 1 seed in the opening round with a 1-0 shutout of top-seeded Auburn en route to its first semifinal appearance in program history. The Tigers then played Auburn to a 2-2 draw before winning a 4-2 decision in penalty kicks in the opening round in 2007, and emerged as 1-0 winners in the semifinal round en route to their first SEC Tournament final in 2009. Auburn captured a 3-0 victory in their last SEC Tournament match in the first round during the 2011 season.

LSU has enjoyed great success at the SEC Tournament in eight previous seasons under head coach Brian Lee, including four-straight semifinal berths from 2007-10 and an even 4-4-4 mark in 12 matches since 2005.

The Tigers wrapped up their 2013 regular season with a narrow 3-2 defeat against No. 23-ranked Texas A&M in College Station on Thursday night for their fifth defeat on the spin in SEC play after racing out to their club record unbeaten start of 5-0-1 through their first six league games. LSU ended the regular-season playing four nationally-ranked teams in five games entering Monday’s opener at the SEC Tournament.

Freshman striker Summer Clarke scored both goals in LSU’s finale at Texas A&M to raise her team-leading total to 10 goals on the season, including an impressive eight goals against SEC competition.

Fellow freshman Emma Fletcher made her case for All-SEC recognition once again by serving up her SEC-leading 12th assist on the season to add to her freshman record at LSU. Fletcher, who also topped the SEC scoring chart with eight assists in league play, enters the postseason tied for the No. 5 spot in the NCAA rankings with her 12 assists on the year.

Fans can watch the Tigers in action throughout their SEC Tournament run as the league will provide live streaming video and audio of each game on its official tournament homepage at http://www.secsports.com.

If the Tigers come away with a result on Monday afternoon, it would set up a rematch of their regular-season finale from Thursday night with a quarterfinal match against the No. 23-ranked Texas A&M Aggies at noon CT on Wednesday at the Orange Beach Sportsplex. The SEC Tournament will run through the championship match that will kick off on Nov. 10 at 1 p.m.