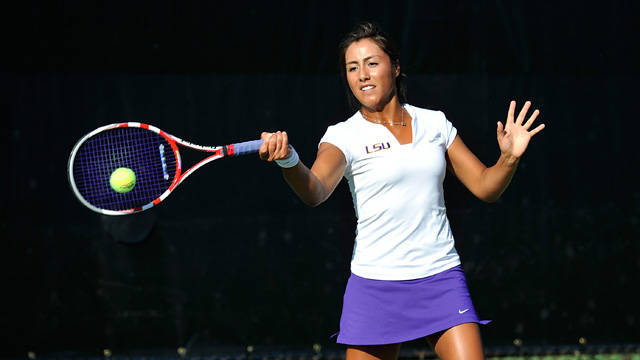 TUSCALOOSA, Ala. – Skylar Holloway and Gabrielle Otero posted two doubles victories as they led the LSU women’s tennis team on the final day of competition at the Roberta Alison Fall Classic.

The Tigers won five matches on Saturday, bringing the total number of wins to 13 for the weekend.

“Overall, this has been a great event for us to play because we got a lot of high quality matches,” LSU head coach Julia S. Sell said.  “I am excited for this team as they are seeing the reward from all their hard work.”

In doubles, Otero and Holloway dominated Furman’s Karlee Bryde and Amanda Murray, 8-0.  The duo from LSU then went on to beat Georgiana Patrasc and Petra Ferancova of Mississippi State 8-5 in the final round of the Melissa Day draw.

Noel Scott and Abigail Owens began the day by defeating Samford’s Sephanie N’tcha and Yasmeen Ebada 8-6 in the semi-finals of the Bianca Svensson draw, but they fell to Maddie Lipp and Belinda Niu of Northwestern, 8-3 in the final round.

Ariel Morton and Ella Taylor beat Laura Mueller and Kristine Kouyoumjian from Loyola Marymount in the Robin Stephenson draw, 8-6.  Morton and Taylor then lost to Kristin Lewis and Carita Moolman of Samford, 8-3.

Otero lost a three-setter to Loyola Marymount’s Kristine Kouyoumjian 6-7(2), 6-3, 6-4 in the last round of the Jenny Ketchum draw.

Owens was defeated by Timea Guibe of Mississippi State in the last round of the Rebecca Baum draw 6-2, 6-0.

Morton lost to Jessica Northcutt from Samford 6-0, 6-3 to conclude the Ashley Bentley draw.

In the finals of the Mari Muller draw, Holloway fell to Northwestern’s Brooke Rischbieth 6-4, 6-3.

LSU will open the spring dual season on Jan. 19 when the Lady Tigers host Nicholls State and Southern in a double header at ‘Dub’ Robinson Stadium.