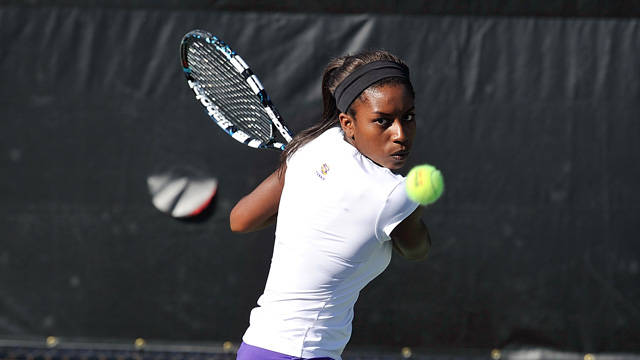 TUSCALOOSA, Ala. – Skylar Holloway led the LSU women’s tennis team and collected two singles matches Friday on the opening day of the Roberta Alison Fall Classic in Tuscaloosa, Ala.

LSU concluded the first day of the tournament with eight wins.

“We had a slow start today, but with every set we played we really improved,” said LSU head coach Julia S. Sell.  “The team showed a maturity today that only comes with a lot of hard work and a great attitude.”

Holloway dominated her first match in a 6-0, 6-0 victory over Clemson’s Carola Pederzani.  Holloway took on Flavia Nagayama of Middle Tennessee State in the semifinals of the Mari Muller draw where she won 6-0, 6-3.  Holloway will square off against Brooke Rischbieth of Northwestern on Saturday.

“Skylar (Holloway) played lights out tennis today,” Sell said.  “I have to highlight her because while she has taken some tough losses this fall she really has improved with every match and not let a few losses discourage her overall goal.”

In doubles, three pairs from LSU took on players from Middle Tennessee State and Northwestern.

Noel Scott and Abigail Owens began the day on a strong note as they defeated Nayara Moraes and Irina Constantinide of Middle Tennessee in a hard fought match that ended in a tiebreaker, 8-7(3).  Scott and Owens advance to the semifinal of the Bianca Svensson draw on Saturday as they take on Stephanie N’tcha and Yasmeen Ebada of Samford.

Ariel Morton and Ella Taylor fought hard, but lost in a tiebreaker to Northwestern’s Veronica Corning and Lissie Barnett, 9-8(2).  The Robin Stephenson draw consolation round on Saturday will feature Morton and Taylor as they face Laura Mueller and Kristine Kouyoumjian from Loyola Marymount.

Gabrielle Otero and Skylar Holloway dropped an 8-2 decision to Jillian Rooney and Manon Peri of Northwestern. Otero and Holloway will play Karlee Bryde and Amanda Murray from Furman in the Melissa Day draw consolation round on Saturday.

In singles, Scott defeated No. 111 Veronica Corning of Northwestern in a thrilling three-setter 2-6, 7-5, 7-5.  Scott then lost to No. 76 Georgiana Patrasc of Mississippi State 7-6(5), 6-2 in the semifinals of the Meritt Emery draw.  Scott will compete against Stephanie N’tcha on Saturday.

Owens fell to Clemson’s Jessy Rompies, 6-2, 6-3.  Owens then squared off against Steph Falcon from UNC Greensboro where she won 2-6, 6-4, 6-0.  Owens will face Timea Guibe of Mississippi State in the consolation final of the Rebecca Baum draw on Saturday.

Morton fell to Clemson’s Annie Lynn Miao in the first round of the Ashley Bentley draw 6-0, 6-1.  Morton defeated Laura Mueller from Loyola Marymount 6-2, 6-0.  Morton will face Jessica Northcutt of Samford on Saturday.

Taylor lost to Ansley Speaks of Furman 6-1, 6-2 in the first round of the Weyli Chang draw. She bounced back to defeat Miya Jin of Loyola Marymount in the second round 6-2, 6-0.  Taylor will play UAB’s Rachel Daniell on Saturday.

Otero fell to Furman’s Katherine Oudin 6-3, 6-4 but then came to back to beat Samford’s Kristin Lewis 6-7(4), 6-1, 6-3 in the second round of the Jenny Ketchum draw.  Otero will compete against Kristine Kouyoumjian from Loyola Marymount on Saturday.