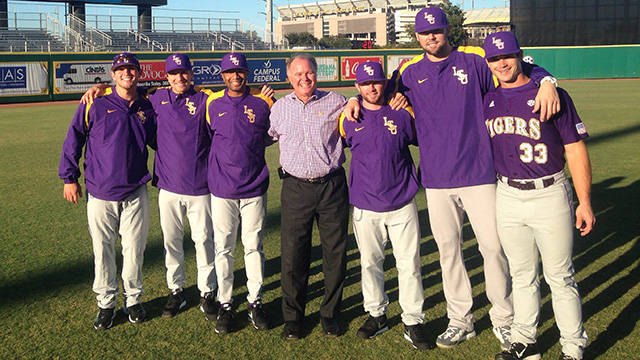 Game 2 of the series starts at 6:30 p.m. Saturday and Game 3 will be played at 4 p.m. Sunday. Freshman left-hander Jared Poche‘ will start on the mound for the Purple on Saturday, while the Gold will counter with junior left-hander Kyle Bouman.

“There were some really good at-bats and a lot of great plays out on the field tonight,” said LSU coach Paul Mainieri. “The most exciting aspect of the night was that we had about 700 people here. It was a wonderful crowd, beautiful weather, the field was in great shape and the guys played great. It was a super night for us.”

Bugg relieved Purple starter Aaron Nola in the third inning and fired three shutout frames before yielding the mound to junior left-hander Henri Faucheux to start the sixth. Faucheux and junior left-hander Zac Person combined to throw a scoreless sixth inning before junior right-hander Brady Domangue earned the save by closing out the game in the seventh.

Domangue allowed two-out singles to Chris Sciambra and Michael Barash but induced a fielder’s choice grounder from Dakota Dean to end the game.

“It was good for Brady to be in the game in that type of situation and work his way out of the jam,” Mainieri said. “He was able to get the big out when he needed to.”

The Gold collected three hits off of Nola in the top of the first inning, including an RBI single by junior second baseman Conner Hale, to take a 1-0 lead.

“I thought the Gold team did a phenomenal job against Nola, forcing him to throw 55 pitches in two innings,” Mainieri said. “But, the key to the game for the Purple team was Parker Bugg coming into the game and throwing three shutout innings.”

The Purple tied the game at 1-1 in the bottom of the second against Gold starter Cody Glenn when freshman second baseman Kramer Robertson lined a run-scoring single, scoring freshman third baseman Danny Zardon, who had doubled to start the inning.

Scivique’s RBI single against Glenn in the fourth proved to be the game-winning hit for the Purple.