by Will Stafford (@WillStaffordLSU)
Meet the Web.com Tour Graduates +0 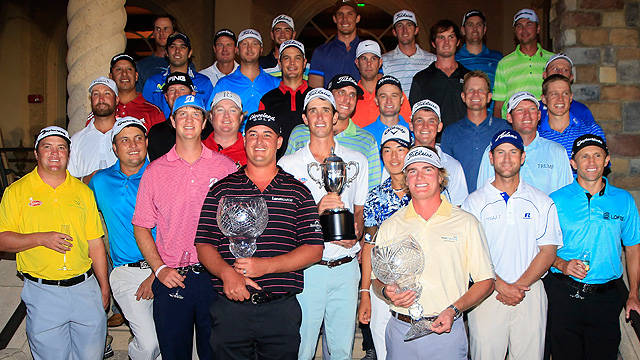 BATON ROUGE – Sunday proved to be a banner day for the LSU Men’s Golf program as two of its graduates officially earning their PGA TOUR cards for the 2013-14 season after John Peterson tied for second place and Andrew Loupe tied for sixth place at the Web.com Tour Championship held this weekend at Dye’s Valley Course in Ponte Vedra Beach, Fla.

The two former Tiger All-Americans earned one of 25 PGA TOUR cards handed out at the conclusion of the four-event Web.com Tour Finals that wrapped up with Sunday’s final round.

In fact, Peterson won the money title for the inaugural Web.com Tour Finals with top-five finishes in each of the four tournaments, including a tie for second at the Web.com Tour Championship with a 72-hole score of 8-under par 272. After opening with a 4-under 66 in Thursday’s first round, Peterson followed with rounds of 1-over 71, 2-under 68 and 3-under 67 to tie for second place.

He finished just two shots off the pace by tournament champion Chesson Hadley, who won the Web.com Tour Championship with a final score of 10-under par 270.

Peterson also tied for fifth place at the Hotel Fitness Championship on Sept. 1, tied for third at the Chiquita Classic on Sept. 8 and finished in third place at the Nationwide Children’s Hospital Championship on Sept. 15 in clinching his PGA TOUR card for the 2013-14 season. He earned $230,000 in the four events to finish just $567 ahead of Hadley’s $229,433 in earnings for the Web.com Tour Finals money title.

Along with earning his PGA TOUR card for next season, Peterson also earned an invitation to compete at The Players Championship next season to be held at the famed TPC Sawgrass, also in Ponte Vedra Beach, Fla.

It wasn’t until the 72nd hole in Sunday’s final round that Loupe actually secured his PGA TOUR card for the 2013-14 season as he needed to make par at the par-four 18th hole at the Valley Course. After running his birdie putt five feet past the hole, Loupe calmly rolled in his par attempt to cap a career-making weekend for the former Tiger standout.

“I was extremely nervous for him,” Peterson told PGATOUR.com of watching his former roommate at LSU attempt to join him as a PGA TOUR player next season. “He’s always been strong mentally. He was like that in college and I just knew he would make that par putt coming back. It means a lot to both of us, but it means a lot to LSU, too. We’ve had David Toms forever. He set the bar pretty high. We’ve brought the program back to the Top 10 by the time we graduated, so to get in (the PGA TOUR) together is huge.”

Loupe also talked to PGATOUR.com after finishing his final round about what their friendship means to each other, saying, “That guy is like a brother to me. I lived with him for three years. He’s a great dude. I’m always pulling for him and he’s always pulling for me. I’m just very happy.”

LSU fans will have the opportunity to watch three Tigers on the PGA TOUR next season as Loupe and Peterson will join Toms for what is sure to be an exciting 2013-14 season for program alums. Toms is one of the true greats of the sport as a 13-time PGA TOUR winner and a former major champion with his victory at the 2001 PGA Championship.