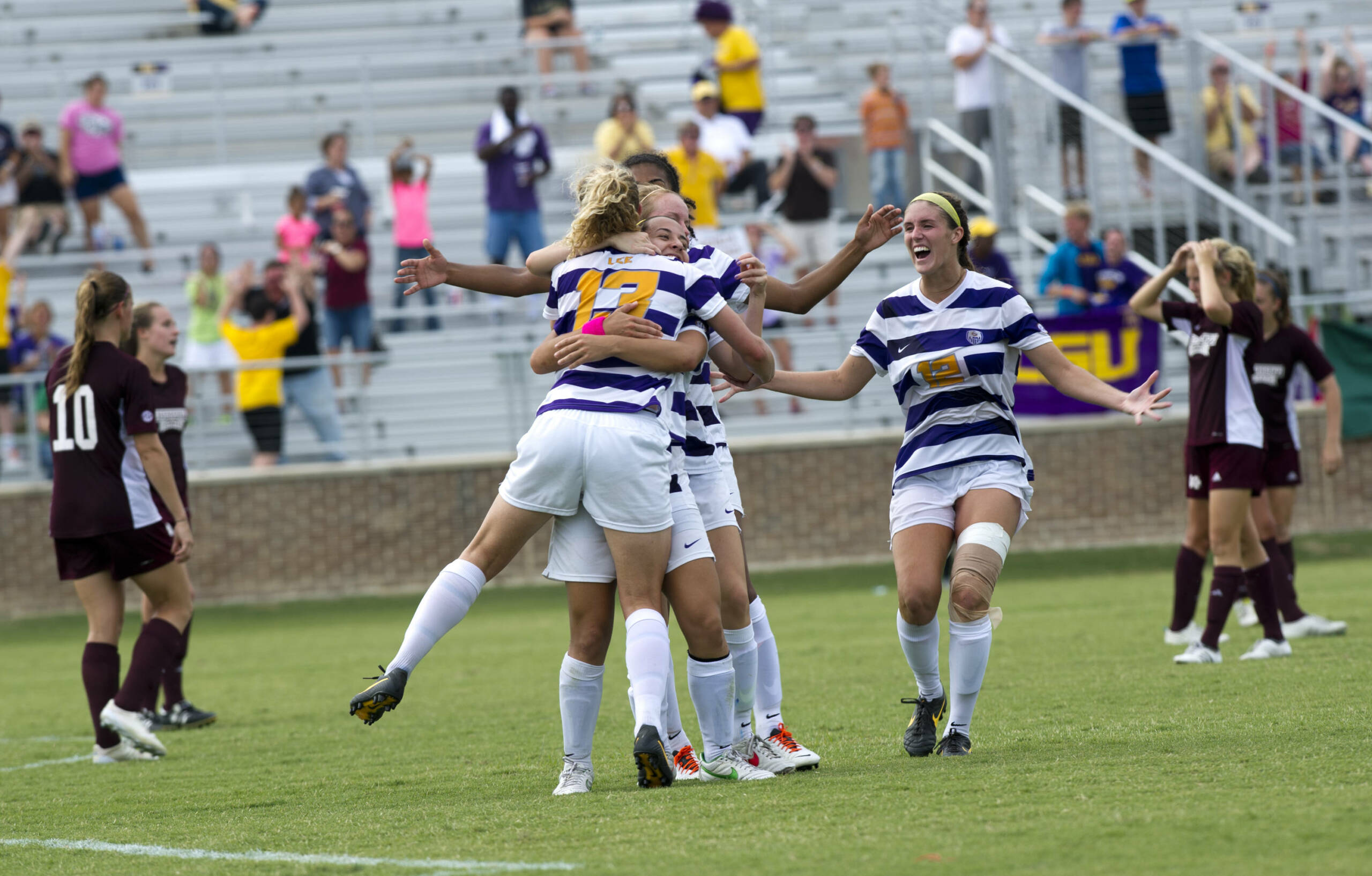 BATON ROUGE – After falling behind 2-0 to the visitors inside of eight minutes from the opening kickoff, senior Nina Anderson and freshmen Summer Clarke and Megan Lee each found the scoresheet to lead the Tigers to a 3-2 comeback win in double overtime over Mississippi State on Sunday afternoon at the LSU Soccer Stadium.

The Tigers (6-3-2, 2-0-1 SEC) emerged victorious while playing their third-straight overtime match as they extended their unbeaten streak to four-straight games with Sunday’s result.

The Tigers also won their ninth-straight match against the Bulldogs (3-7, 0-3) dating back to the 2005 season and extended their unbeaten streak to 12-straight matches in the series as they are now 11-0-1 against their league rivals since the 2002 season. LSU also moved to the top of the SEC standings with the victory, pending the result of Sunday’s nightcap between Georgia and Kentucky.

After playing to a 2-2 draw into the second overtime period, Lee provided the heroics for the Tigers just over two minutes from the restart by scoring the game-winning Golden Goal for her first goal as an LSU Tiger.

Fellow freshman Emma Fletcher made a class run into the attacking third before playing the ball to Lee in space between two Mississippi State defenders near the top of the box. Lee composed herself and put the ball on her left foot for a low-lining strike inside the right post in the 103rd minute to hand the Tigers a crucial three points in the SEC Championship race.

“I thought this was my shot, this was my moment. I was really excited and really nervous,” Lee said of her feelings on lining up the game-winning shot. “It was a good slip pass by Emma Fletcher, and I got a good turn to it. I kind of wished for a better shot. You always want those wonder goals that you drive it top corner, but I’ll take the roller across the line. I hadn’t scored a goal yet, so it’s a really good feeling.”

The Tigers found themselves chasing the game early on after conceding two goals to Mississippi State’s All-SEC striker Elisabeth Sullivan inside of eight minutes from the opening kickoff of the match.

Sophomore defender Shelby Jordan picked out Sullivan for an open look at the top of the box in the fourth minute of the match as she turned and fired a left-footed strike inside the left post to give Mississippi State a 1-0 lead with her 10th goal of the season at the 3:58 mark. She then struck back just over three minutes later with her second goal of the match and 11th of the season by converting a penalty kick into the left side of the net to extend the Bulldogs’ lead to 2-0 just 7:16 into the match.

That’s when the Tigers went to work as Clarke pulled one back just three minutes later on a brilliant combination play with Lee in the 11th minute to get through the Bulldog back line for a left-footed strike into the back of the net from just beyond the six-yard box. It was Clarke’s third goal of the season, and her first since a 4-2 home defeat for the Tigers against No. 6-ranked BYU back on Sept. 2.

Anderson then drew the Tigers level at 2-2 just before the break with her first goal of the year as she took a pass from Clarke in the left side and fired a 10-yard strike inside the far post at the 41:38 mark of the half.

The Tigers turned up the pressure on the Bulldogs into the second half and first overtime, but were unable to find the net until Lee’s winner at the 102:05 mark of the second overtime. The Tigers ended the game with a 20-13 edge in total shots and a 12-1 advantage in corner kicks, while each team fired seven shots on goal on the afternoon.

After the Tigers conceded two early goals to the Bulldogs, LSU’s senior goalkeeper Megan Kinneman saved each of Mississippi State’s five shots on goal down the stretch to lead the defensive effort in the victory.

“It’s a big win. You play 11 games in a row in the SEC, and how you play in the tight games is going to determine where you stand at the end,” said LSU head coach Brian Lee. “Our team has shown good character. This is now three in a row that we’ve been to overtime. We certainly feel like we’re a stronger, fitter, faster team right now the later the game goes. I thought we kind of proved that again today.”

The Tigers will head back on the road in SEC play next weekend when they travel to Fayetteville, Ark., to take on the Arkansas Razorbacks on Friday night at 7 p.m. CT at Razorback Field and Tuscaloosa, Ala., to face the Alabama Crimson Tide next Sunday afternoon at 1 p.m. at the Alabama Soccer Complex.