Volleyball Falls in Five-Setter to Georgia 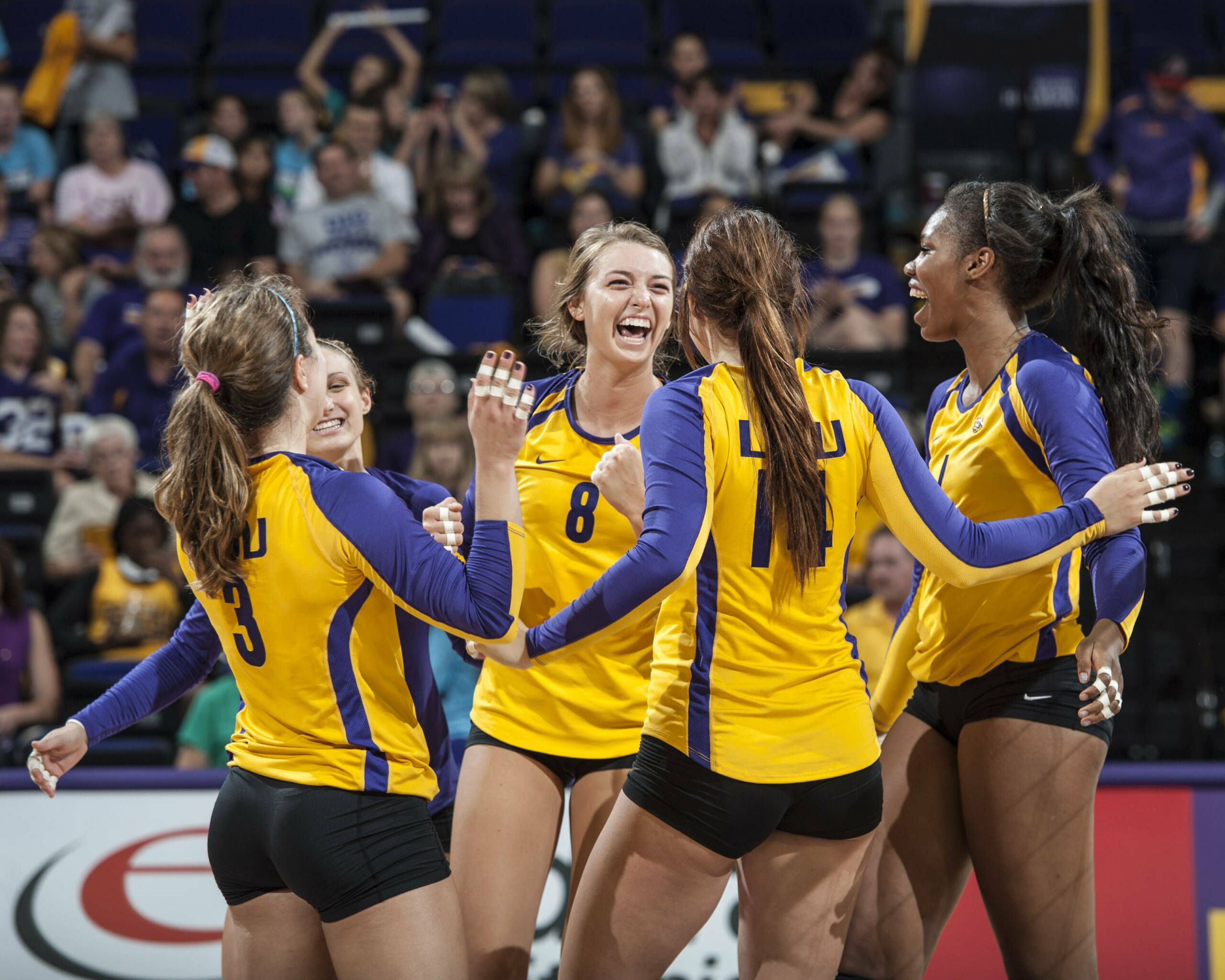 LSU (10-2, 0-1 SEC) had its run of nine straight wins in SEC home openers since 2004 come to a close. Georgia (11-2, 1-0 SEC) defeated the Tigers for only the third time in the last 16 meetings going back to the 2004 season, but the Bulldogs have won consecutive five-set matches in Baton Rouge during each of the last two seasons.

For Fears, it marked the second time in the last three matches she has reached double figures in kills. The 31 attempts were a career-high.

Malorie Pardo amassed her fifth straight double dip and seventh overall of 2013. She handed out 48 assists and racked up a career-high 23 digs. LSU held a .162 to .155 edge in hitting percentage, but Georgia garnered 69 kills versus LSU’s 60 spikes.

“I thought Khourtni played very well,” Flory said. She was very efficient, and I thought she blocked fairly well. I thought she channeled the ball well when she wasn’t blocking. She hit smart shots. She showed great maturity in the shot selection she chose. She didn’t try to burry every ball like the rest of us. She was hitting high deep corners. Those are balls that are going to score against anybody.”

“Khourtni picked it up tonight,” Pardo said. “She took a little bit more of the load than she usually does. I give her props. She did very well. The connection is easy. Her mindset was not just putting the ball down but keeping it in. She did a great job and found the shots that worked best for her.”

Helen Boyle returned to the starting lineup and collected her second double-double of the season. She powered home 15 kills and added 17 digs.

Briana Holman notched 14 kills and six blocks. She was limited to a .153 hitting clip, her lowest output since the team’s season-opener versus Texas-San Antonio on Aug. 30. It marked Holman’s 10th consecutive match with 10 or more kills.

UGA’s offense was led by Stacey Smith (19 kills), Tirah Le’au (16 kills) and Lauren Teknipp (14 kills). Maggie Baumert and Kaylee Kehoe distributed 29 and 27 assists for the Bulldogs. Defensively, Allison Summers sprawled out for 38 digs, the most by a SEC player this season.
“The biggest problem is that they were attacking our left side blockers,” Flory said. “Our left side blockers disappeared on us tonight. That’s why Malorie had to dig so many balls. If our left side blockers would have executed the game plan we practiced all week, this match would have been different. We weren’t disciplined, and we didn’t get in the right spot.”

The first set featured 12 ties and four lead changes. Georgia picked up five early blocks and took its largest lead at 19-15. The Tigers ripped off three straight points on a Holman kill, a Lindelow ace and a Holman solo block to draw back to 19-18. LSU knotted the score at 22-22 after consecutive Pardo and Lindelow kills. The Tigers wiped away a set point at 24-23 and emerged with the 26-24 victory as Holman popped two more kills sandwiched between a UGA setting error. The trio of Boyle, Fears and Holman combined for 12 of LSU’s 15 kills during the frame.

LSU raced out to a 14-9 edge to start set two behind three kills each from Boyle and Fears. The Tigers also turned up the defensive intensity and forced Georgia into five hitting errors. However, the Bulldogs regrouped with13 of the next 16 points to surge ahead by a 22-17 margin. LSU would charge back to within 23-21, but UGA received Smith and Le’au kills to close out the 25-21 decision.

Out of the locker room, the Tigers controlled the third stanza from the opening moments. LSU pulled ahead 12-7 on a Boyle kill and stretched its advantage to 19-11 on consecutive Lindelow and Fears spikes. LSU wrapped up the 25-16 win on another Lindelow kill. A key to the frame was LSU’s ability to convert on a match-best 14-of-17 sideout attempts.

Set four went back-and-forth and was highlighted by 15 ties to go along with six lead changes. Georgia took a 14-10 edge on a Smith kill, but it was quickly went away as LSU connected a Boyle kill, a Lindelow kill and two blocks involving Fears to tie the ledger at 14-14. Neither team would go ahead by more than a one point down the stretch. LSU erased two set point chances, but Georgia organized a triple block on Holman to tuck away the 27-25 win.

After splitting the first six points of the winner-take-all fifth set, Georgia ripped off five straight points to seize the momentum. Le’au ignited the spurt with a kill followed with consecutive aces. A Chloe Buckendahl kill capped the run and put Georgia up 8-3. LSU would get as close as 9-7 after a Raicevic kill, but back-to-back UGA blocks put the Bulldogs back ahead 11-7. Le’au provided the final blow to vault Georgia to the 15-9 victory.

“Tonight everybody’s going to be a little down, and that’s okay,” Pardo said. “But tomorrow, it’s done. You can grieve tonight, but once tomorrow hits it’s a new day. We have to prepare like that and mentally do that. I think that I’m ready to see the team and how it channels out. We just have to come in the gym prepared and ready to work hard.”

“The bottom line is that is a good thing we had this match right now,” Flory said. “We have two weeks to get better and to improve before we play another SEC match. Anytime you have a loss like this, the players walk off the court feeling like they didn’t play the best they could have. It is great opportunity for a coaching staff to seize control and make sure they provide that drive. Our staff will do a great job of getting them ready. Truly, our goals are to take care of business in the SEC. The Texas match is a great match to have on our home court. We are excited to have them. We have to rebound and get focused on the next task at hand.”

LSU plays host to defending national champion and No. 5 Texas next Saturday as part of “Kids Day”, “Dads and Daughters Day” and “East Baton Rouge Schools Day”. First serve is slated for 1 p.m. from the Maravich Center, and the Longhorn Network will televise the match. Before the match, there will be a Kids Zone with inflatables and face painting on the Maravich Center plaza.

Admission to all 2013 home matches is free compliments of the Advocate’s “Geaux Free” program. The first 750 fans will add a LSU volleyball “Earn This” t-shirt along with a set of volleyball trading cards to their collection.