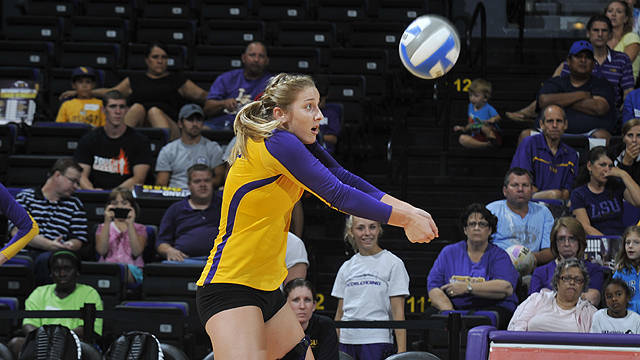 BATON ROUGE – The LSU volleyball team returns home after a three-weekend road swing and turns its attention to SEC play as the Tigers meet Georgia Friday in the conference opener for both teams. The Tigers have won its last nine SEC home openers going back to the 2004 season.

Friday’s first serve is scheduled for 7 p.m. inside the Maravich Center. Live video and live stats will be available for Geaux Zone subscribers at www.LSUsports.net/live.

Admission to all 2013 home matches is free compliments of the Advocate’s “Geaux Free” program. Fans are encouraged to wear gold for the Georgia match to support the Tigers as part of the program’s annual “Gold Match”, the first 500 fans will receive a “Gold Digger” tank top.

LSU (10-1) captured three tournament titles and ended Miami’s 18-match home winning streak to highlight non-conference play. The 10-1 start is the program’s best since 2010, and the Tigers also have picked up a pair of 2-0 comeback wins over Miami and Baylor.

“The fact that we do have the resiliency and the confidence in the locker room when we’re down two sets that the match isn’t over is certainly a good thing,” head coach Fran Flory said. “The quest is to figure out how not start in that capacity. Credit the teams that we are playing against because their game plans have been very good. We’ve probably been a little too patient in how we’ve started matches. This week in practice, we’ve been trying to address that. We know in the SEC that we can’t walk on the court, feel the other team out and decide to turn on the jets later. We need to learn how to start fast and finish. I think we have the finish part, we just don’t have the fast start.”

LSU holds a 31-20 all-time series edge over Georgia and have won 13 of the previous 15 meetings dating back to the 2004 season. However, the Bulldogs overcame a 2-1 deficit to win in five sets during last year’s meeting in Baton Rouge.

UGA (10-2) has put together its best start through 12 matches since 2007 with its lone setbacks coming to then No. 13 Nebraska and Kansas. The Bulldogs have five players who have averaged over 1.95 kills per set. Brittany Northcutt has posted 2.51 kills per set and enters the weekend 24 kills away from reaching 1,000 for her career. Jasmine Eatmon and Stacey Smith have tallied .374 and .372 hitting percentages, respectively. On the back row, Allison Summers has registered 4.56 digs per set to rank third on the SEC leaderboard.

“No question, Georgia is a big physical team,” Flory said. “They have a nice balance of experience on the court and have a lot of adaptability in what they do. Certainly, I know Coach Stemke will have her team ready. We’re going to have to play well on our side. The bottom line is I still believe that all volleyball comes down to which team can serve-and-pass the best and make the fewest errors. If our team can maintain that, I thought we got a little off track with our offensive hitting errors last weekend. We’ve worked hard in practice this week to get us back into a flow.”

Malorie Pardo is coming off a trio of double-doubles and was named the MVP of last weekend’s Flo Hyman Collegiate Cup. She sparked three players – Briana Holman (19 kills), Katie Lindelow (18 kills) and Khourtni Fears (12 kills) – to ignite LSU’s 3-2 comeback victory over Baylor. For the season, Pardo’s 11.06 assists per set are fourth among SEC setters and her team-leading six double-doubles are tied for fifth in the SEC.

Haley Smith joined Pardo on last weekend’s all-tournament team and has started LSU’s last seven matches at libero. She has navigated her way to seven consecutive double figure dig efforts and a 4.26 per set mark over that span and is 127-of-131 on her reception attempts which includes four straight perfect passer marks.

Offensively, Holman has made an instant impact and started all 11 matches for the Tigers. She has blasted 10 or more kills in nine straight matches. The two-time SEC Freshman of the Week has powered home 3.20 kills per set on a team-leading .386 hitting clip. The Texas native also has racked up 73 blocks with her 1.66 per set average not only pacing the SEC but ranking second nationally.

Lindelow has secured 2.32 kills and 2.48 digs per set as a six-rotation player over her last seven outings. She has compiled three double dips and converted on 223-of-230 reception attempts. Lindelow has added an ace during nine of 11 matches, while 0.40 aces per set is third in the SEC.

Cati Leak has buried a team-leading 3.64 kills per set, fifth-highest in the SEC. She also has chipped in 2.54 digs per set en route to six double-doubles which are tied for fifth place on the SEC list.

Desiree Elliott has notched a strong all-around effort with 2.73 kills, 2.00 digs and 0.77 blocks per set. She saw limited action during last weekend’s Flo Hyman Collegiate Cup after missing back-to-back weekends due to injury.

Madi Mahaffey has totaled 1.13 kills and 1.23 blocks per set on the right side. She has added five-plus blocks in eight of 11 matches and her 1.23 blocks per set is fourth in the SEC. Katarina Raicevic belted 14 kills, six digs and five blocks in her first extended action of the season at the Flo Hyman Collegiate Cup.

“Madi is probably our most disciplined and best blocker on the right side of the court,” Flory said. “She stabilized that portion of our defense which is something that’s very valuable to our team. Katarina continues to get better and was in the gym extra last week. Her offense, her adaptability and her volleyball IQ – she seems to know the right shot to hit in the right situation. She’s scoring with those shots. Right now, she’s the person that’s making our right side offense come around.”

LSU has earned 181 victories sparked by five 20-win seasons to go along with seven of the last eight SEC Western Division titles since 2005. The Tigers also are one of 34 programs to appear in six NCAA Tournaments during the previous eight-year stretch.

The Georgia match marks the first of six “Attend & Win” matches where one fan will take home a 32-inch television. To be eligible for the “Attend & Win” prizes, fans must stay through the entire match.

The “Friday Night Meal Deal” returns as LSU concessions will provide a special menu for only $7 per meal beginning at 6 p.m. inside the Courtside Club located at the Northwest entrance. To reserve a “Meal Deal” in advance, email promotions@lsu.edu with the quantity of meals and names. The Georgia match menu consists of Chicken Florentine with angel hair pasta and a vegetable medley.