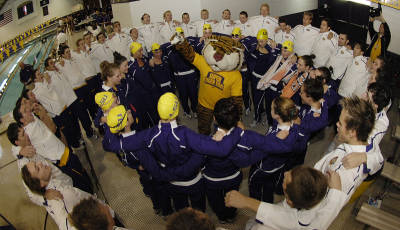 BATON ROUGE — The LSU swimming and diving team is set for the first competition of the 2013-14 season as they face off in the annual Purple and Gold Intrasquad meet at 3 p.m. CT in the LSU Natatorium.

Teams will be split into the purple and gold teams. The captains will be NCAA qualifiers Frank Greeff for the gold team and Amber Carter leading the purple team. Greeff is a 2013 NCAA Honorable Mention All-American and holds the record in the 200 butterfly, 800 freestyle relay and 400 medley relay.

“We have changed the format as opposed to years past,” said LSU swimming coach Dave Geyer. “We are using the total team time as a way to score the meet. It should put everybody in a position where honest effort and competition is going to be at the premium. It’s an opportunity to start putting everyone in the competition mindset. It’s about time to start racing.”

The Lady Tigers return the core of their roster. The women will return 19 letterwinners, two All-Americans and experience at NCAA’s.

Weil and Bettridge will lead the divers on the women’s side. Both were NCAA Honorable All-Americans and earned SEC Freshmen Diver of the Year in their first years. Weil holds the program record in the three-meter dive and has experience at the national level after placing third at USA Diving Nationals this August. Bettridge goes into her junior year looking to return to NCAA’s after placing seventh at the NCAA Zone “D” Regional last year.

The men’s side will look to replace almost half of their roster. The Tigers return two NCAA All-Americans and 13 letterwinners including Sean McKinney, Gabe Rooker, Michael Saco, Michael Young, Daniel Helm and Frank Greeff.

Last season, Greeff became LSU’s third NCAA All-American in the 200 butterfly and picked up his first NCAA Honorable Mention All-America honor. He looks to continue his success and become the top 200 flyer in program, history.

McKinney, a senior from Springfield, Va. looks to improve after a tremendous junior year. The diver holds LSU’s record on the three-meter springboard and owns the fifth-best score on platform.

Rooker looks to take off after a stellar freshmen season. He was named to the 2013 All-SEC Freshmen team and is a part of the group that holds the LSU record in the 400-yard medley relay (3:10.42).

“This is an opportunity after working hard in our preseason, in the weight room, and with our conditioning to start putting ourselves in a competitive situation,” LSU diving coach Doug Shaffer said. “We are going to do two dives on the one-meter, two dives on the three-meter and two dives on platform. It’s a modified format to give us a competitive taste but still fits within where we are in this season.”